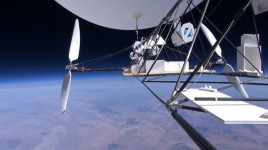 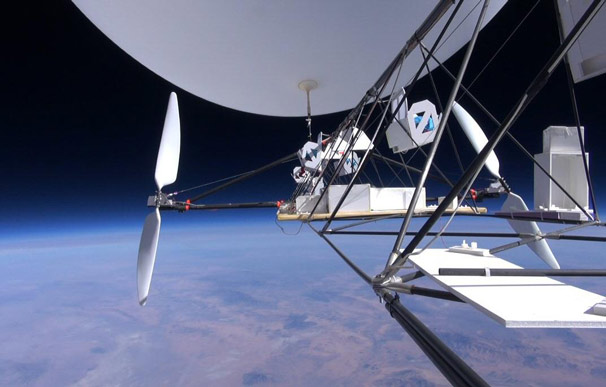 A view from the Tandem airship during its record-breaking flight on Oct. 22. CREDIT: JP Aerospace

Imagine what it would be like to live aboard an airship that was floating 15 to 20 miles above Earth. Crewed stations with huge balloons could someday act as waypoints for human astronauts headed into space. That’s the vision of JP Aerospace, a company that recently broke world altitude records by sending their Tandem airship up 18 miles into the sky.

The Tandem airship soared almost four miles higher than any past airships during its record-breaking flight on the morning of Oct. 22. Its flight to 95,085 feet above Nevada’s Black Rock desert marks a first step toward plans for an “Airship to Orbit” program that would fly humans into space using existing technology.

JP Aerospace has also begun flight-testing small models of “Dark Sky Stations” that would act as suborbital space stations. The stations, supported by balloons, could eventually reach a size 2 miles wide and act as the middle waypoint for the atmospheric airship. Fitting the Dark Sky Stations with Ion engines would have enormous potential for launching entire pre-fabricated space stations, lunar habitats and landers, and even martian landers.

“This new way to space has not and will not require a massive pile of capital to accomplish,” according to JP Aerospace. “Each component has its own business application and funding source. It is a pay-as-you-go system.”

“The big aerospace firms have been trying to do this for decades, spending hundreds of millions of dollars,” said John Powell, president of JP Aerospace. “We’ve spent about $30,000 and the past five years developing Tandem.”

Such exciting advances in commercial space continue to impress.

Read more about JP Aerospace and the Tandem airship on Space.com!