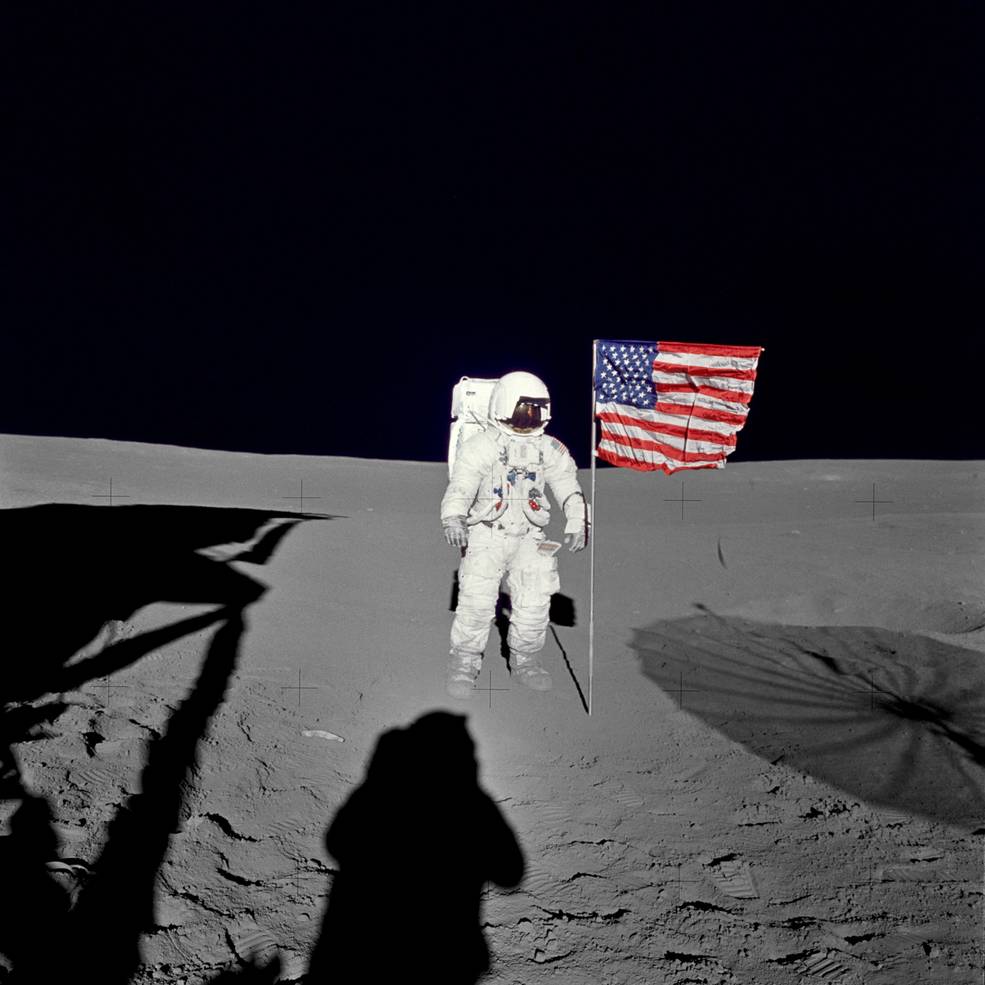 Astronaut Edgar D. Mitchell, Apollo 14 lunar module pilot stands by the deployed U.S. flag on the lunar surface during the early moments of the mission’s first spacewalk. He was photographed by astronaut Alan B. Shepard Jr., mission commander. While astronauts Shepard and Mitchell descended in the Lunar Module “Antares” to explore the Fra Mauro region of the moon, astronaut Stuart A. Roosa, command module pilot, remained with the Command and Service Module “Kitty Hawk” in lunar orbit. Credit: NASA

Astronaut Edgar Mitchell, lunar module pilot on Apollo 14, passed away Thursday in West Palm Beach, Fla., on the eve of the 45th anniversary of his lunar landing.

Mitchell joined Apollo 14 commander Alan Shephard, Jr., the first American in space, in the lunar module Antares, which touched down Feb. 5, 1971, in the Fra Mauro highlands. Shepard and Mitchell were assigned to traverse the lunar surface to deploy scientific instruments and perform a communications test on the surface, as well as photograph the lunar surface and any deep space phenomena. It was Mitchell’s only spaceflight. 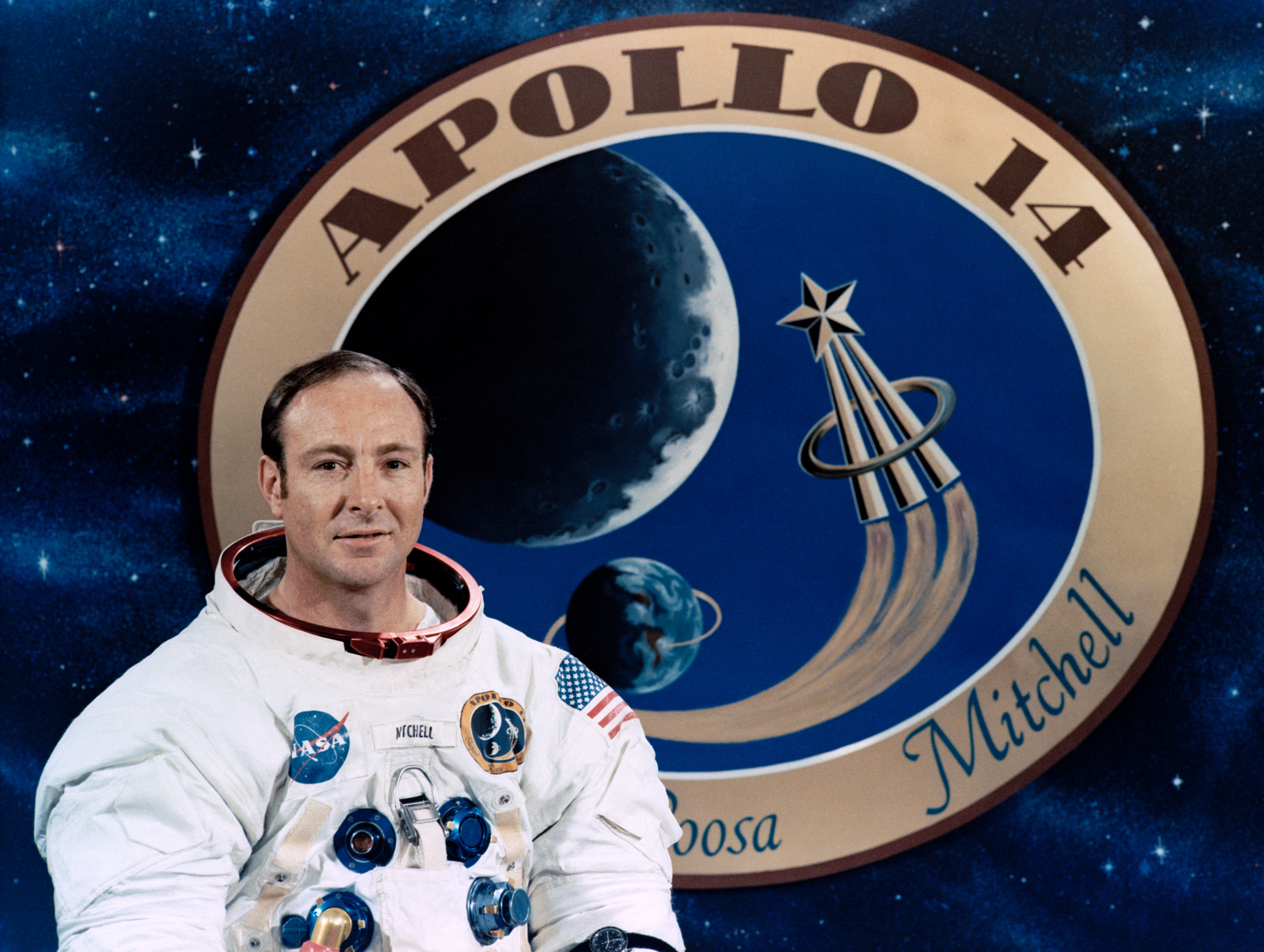 Apollo astronaut Edgar Mitchell in front of a graphic of the mission patch. Credit: NASA

Mitchell and Shephard set mission records for the time of the longest distance traversed on the lunar surface; the largest payload returned from lunar surface; and the longest lunar stay time (33 hours). They were also the first to transmit color TV from the lunar surface. Mitchell helped collect 94 pounds of lunar rock and soil samples that were distributed across 187 scientific teams in the United States and 14 other countries for analysis.

“On behalf of the entire NASA family, I would like to express my condolences to the family and friends of NASA astronaut Edgar Mitchell,” NASA Administrator Charles Bolden said in a statement. “As a member of the Apollo 14 crew, Edgar is one of only 12 men to walk on the moon and he helped to change how we view our place in the universe. ”

Mitchell was drawn to the spaceflight by President Kennedy’s call to send astronauts to the moon. “After Kennedy announced the moon program, that’s what I wanted, because it was the bear going over the mountain to see what he could see, and what could you learn, and I’ve been devoted to that, to exploration, education, and discovery since my earliest years, and that’s what kept me going,” Mitchell said in 1997 interview for NASA’s oral history program.

“To me, that (spaceflight) was the culmination of my being, and what can I learn from this? What is it we are learning? That’s important, because I think what we’re trying to do is discover ourselves and our place in the cosmos, and we don’t know. We’re still looking for that.”

In his book “The Way of the Explorer”, Mitchell wrote, “There was a sense that our presence as space travelers, and the existence of the universe itself, was not accidental but that there was an intelligent process at work.”

It's the 45th Anniv of the #Apollo14 landing on the moon & yesterday we lost another Lunar Pioneer Edgar Mitchell. https://t.co/SpLU5RhesK

Mitchell retired from NASA and the U.S. Navy and founded the Institute of Noetic Sciences in 1973, organized to sponsor research in the nature of consciousness. In 1984, he co-founded the Association of Space Explorers, and international organization for all who “share experience of space travel.” The mission of this organization is to provide a new understanding of the human condition resulting from the epoch of space exploration.

Scenes from the Apollo 14 mission

Edgar D. Mitchell was born Sept. 17, 1930 in Hereford, Texas, and considered Artesia, N.M., his hometown. He graduated with a B.S. in Industrial Management from Carnegie Mellon in 1952, a B.S. in Aeronautics from the U.S. Naval Postgraduate School in 1961 and a Doctorate in Aeronautics and Astronautics from the Massachusetts Institute of Technology in 1964. NASA selected Mitchell as an astronaut in 1966. He served on the support crew for Apollo 9 and as backup lunar module pilot for Apollo 10. He worked in the lunar module simulator at the Johnson Space Center during Apollo 13, developing procedures that would bring the crew of that crippled spacecraft home.