A study of 544 star-forming galaxies observed by the Keck and Hubble telescopes shows that disk galaxies like our own Milky Way unexpectedly reached their current state long after much of the universe’s star formation had ceased. Over the past 8 billion years, the galaxies lose chaotic motions and spin faster as they develop into settled disk galaxies. Credit: NASA’s Goddard Space Flight Center

A comprehensive study of hundreds of galaxies observed by the Keck telescopes in Hawaii and NASA’s Hubble Space Telescope has revealed an unexpected pattern of change that extends back 8 billion years, or more than half the age of the universe.

“Astronomers thought disk galaxies in the nearby universe had settled into their present form by about 8 billion years ago, with little additional development since,” said Susan Kassin, an astronomer at NASA’s Goddard Space Flight Center in Greenbelt, Md., and the study’s lead researcher. “The trend we’ve observed instead shows the opposite, that galaxies were steadily changing over this time period.”

Today, star-forming galaxies take the form of orderly disk-shaped systems, such as the Andromeda Galaxy or the Milky Way, where rotation dominates over other internal motions. The most distant blue galaxies in the study tend to be very different, exhibiting disorganized motions in multiple directions. There is a steady shift toward greater organization to the present time as the disorganized motions dissipate and rotation speeds increase. These galaxies are gradually settling into well-behaved disks. 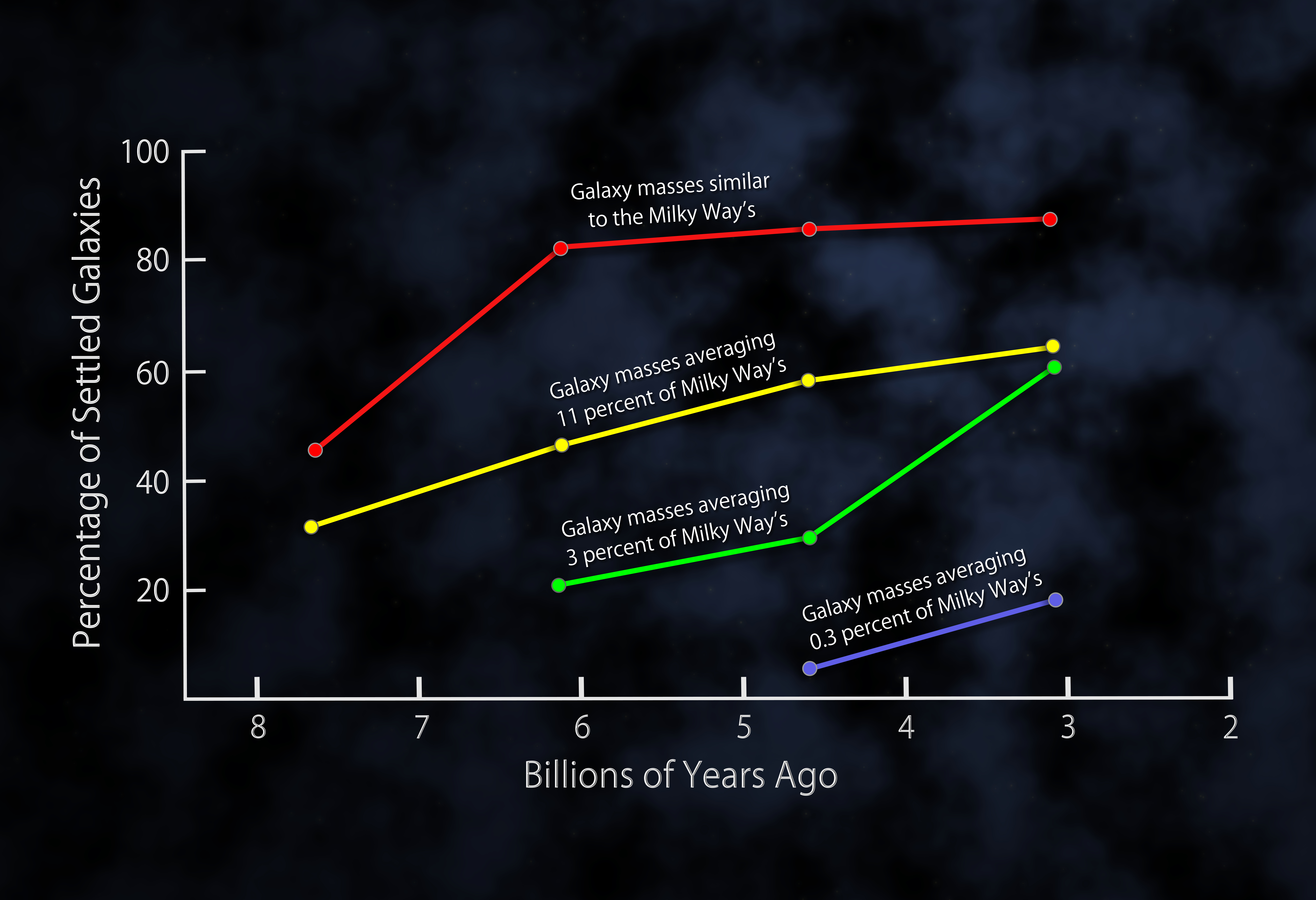 This plot shows the fractions of settled disk galaxies in four time spans, each about 3 billion years long. There is a steady shift toward higher percentages of settled galaxies closer to the present time. At any given time, the most massive galaxies are the most settled. More distant and less massive galaxies on average exhibit more disorganized internal motions, with gas moving in multiple directions, and slower rotation speeds. Credit: NASA’s Goddard Space Flight Center

Blue galaxies — their color indicates stars are forming within them — show less disorganized motions and ever-faster rotation speeds the closer they are observed to the present. This trend holds true for galaxies of all masses, but the most massive systems always show the highest level of organization.

Researchers say the distant blue galaxies they studied are gradually transforming into rotating disk galaxies like our own Milky Way.

“Previous studies removed galaxies that did not look like the well-ordered rotating disks now common in the universe today,” said co-author Benjamin Weiner, an astronomer at the University of Arizona in Tucson. “By neglecting them, these studies examined only those rare galaxies in the distant universe that are well-behaved and concluded that galaxies didn’t change.”

Rather than limit their sample to certain galaxy types, the researchers instead looked at all galaxies with emission lines bright enough to be used for determining internal motions. Emission lines are the discrete wavelengths of radiation characteristically emitted by the gas within a galaxy. They are revealed when a galaxy’s light is separated into its component colors. These emission lines also carry information about the galaxy’s internal motions and distance.

This cosmological simulation follows the development of a single disk galaxy over about 13.5 billion years, from shortly after the Big Bang to the present time. Colors indicate old stars (red), young stars (white and bright blue) and the distribution of gas density (pale blue); the view is 300,000 light-years across. The simulation ran on the Pleiades supercomputer at NASA’s Ames Research Center in Moffett Field, Calif., and required about 1 million CPU hours. It assumes a universe dominated by dark energy and dark matter. Credit: F. Governato and T. Quinn (Univ. of Washington), A. Brooks (Univ. of Wisconsin, Madison), and J. Wadsley (McMaster Univ.).

The team studied a sample of 544 blue galaxies from the Deep Extragalactic Evolutionary Probe 2 (DEEP2) Redshift Survey, a project that employs Hubble and the twin 10-meter telescopes at the W. M. Keck Observatory in Hawaii. Located between 2 billion and 8 billion light-years away, the galaxies have stellar masses ranging from about 0.3 percent to 100 percent of the mass of our home galaxy.

A paper describing these findings will be published Oct. 20 in The Astrophysical Journal.

The Milky Way galaxy must have gone through the same rough-and-tumble evolution as the galaxies in the DEEP2 sample, and gradually settled into its present state as the sun and solar system were being formed.

In the past 8 billion years, the number of mergers between galaxies large and small has decreased sharply. So has the overall rate of star formation and disruptions of supernova explosions associated with star formation. Scientists speculate these factors may play a role in creating the evolutionary trend they observe.

Now that astronomers see this pattern, they can adjust computer simulations of galaxy evolution until these models are able to replicate the observed trend. This will guide scientists to the physical processes most responsible for it.

The Hubble Space Telescope is a project of international cooperation between NASA and the European Space Agency. NASA’s Goddard Space Flight Center in Greenbelt, Md., manages the telescope. The Space Telescope Science Institute (STScI) in Baltimore, Md., conducts Hubble science operations. STScI is operated by the Association of Universities for Research in Astronomy, Inc. in Washington.