Attention, All Scientists: Do Improv! 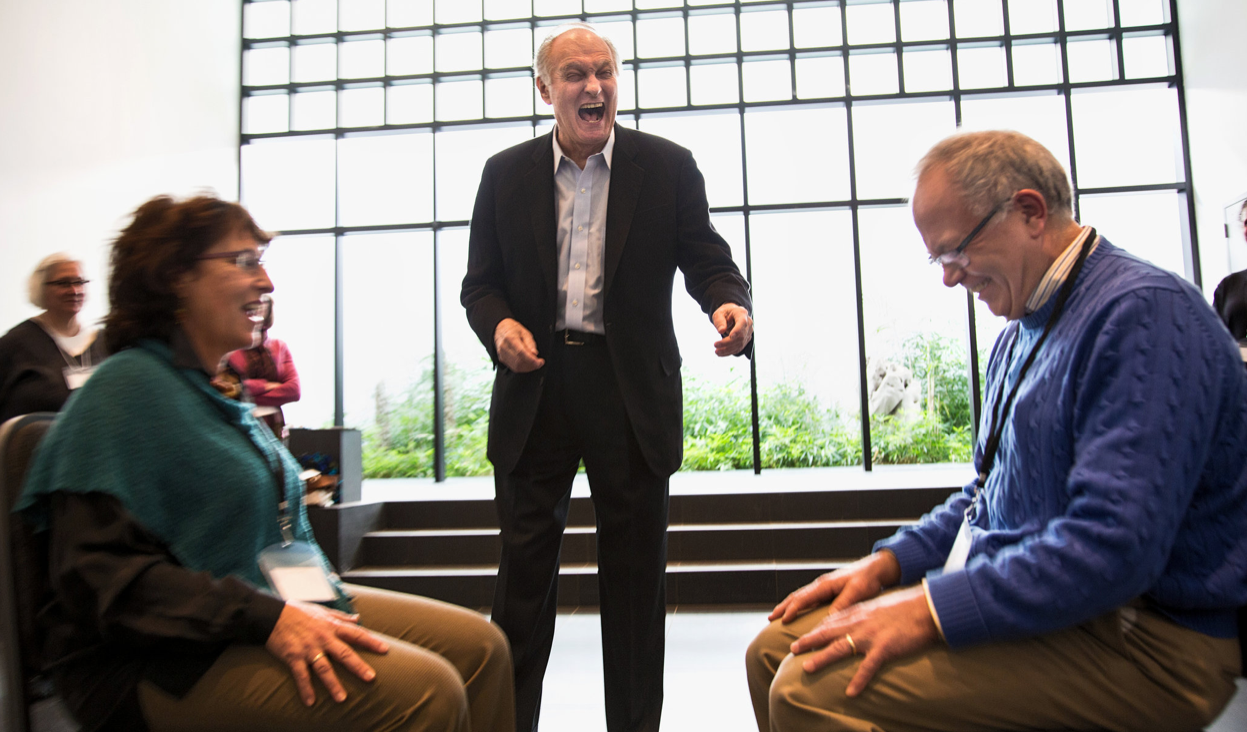 Alan Alda, who played Hawkeye on “M*A*S*H,” using a improvisational exercise to teach scientists how to better speak about their work to nonscientists. A program at Stony Brook is named for him. Image Credit: Uli Seit /New York Times

Members of Stony Brook have taken to improvisational exercises to teach scientists how to better speak about their work to nonscientists.

The idea of teaching improv to scientists came from Mr. Alda, now a visiting professor at Stony Brook. Alda recently held a workshop at StonyBrook where he taught an exercise called “who am I?”, which challenges participants to convey an unstated relationship with another, while everyone else must try to deduce the relationship. The objective is not to make them funny, but to help them talk about science to people who are not scientists.

“What I find interesting about this is you’re suddenly talking about your work in a way you’ve never talked about it before,” Mr. Alda said.

Mr. Alda started suggesting to university presidents that they teach scientists how to present their research to the public. In 2009, Stony Brook established the Center for Communicating Science as part of its journalism school. In addition to classes, the center started the Flame Challenge, a contest seeking compelling explanations of seemingly simple phenomena. The first year, the question was “What is a flame?” Mr. Alda asked his teacher this when he was 11, and the answer — “oxidation” — was his first experience with confusing scientific jargon. This year, the question is “What is sleep?” The winners will be named at the World Science Festival in New York in May.

In 2013, the Stony Brook program was officially named the Alan Alda Center for Communicating Science.

Howard Schneider, the dean of the journalism school, said science departments were initially skeptical, with many thinking improv would be a distraction.

That has changed. The ability to describe science effectively could prove key to winning research financing in the future.Two graduate programs now require students to take the center’s classes. All medical school students receive 10 hours of training.

The recent workshop was for about 40 members of the Stony Brook faculty. For the improv sessions, the group with Mr. Alda threw around imaginary balls of varying weights, mirrored one another’s movements, tried to explain a smartphone to a time traveler from the past, and talked of cherished photographs while holding up a blank white folder. In the afternoon, they broke into smaller groups to talk about how to distill and describe their own research.

Dr. Furie, who directs the graduate program in genetics, said she had started the day unsure the center’s offerings were a good use of time for her graduate students.

Tim Glotch and the RIS4E team will be doing exercises similar to those described in the story on the Sunday before the Exploration Science Forum this summer.