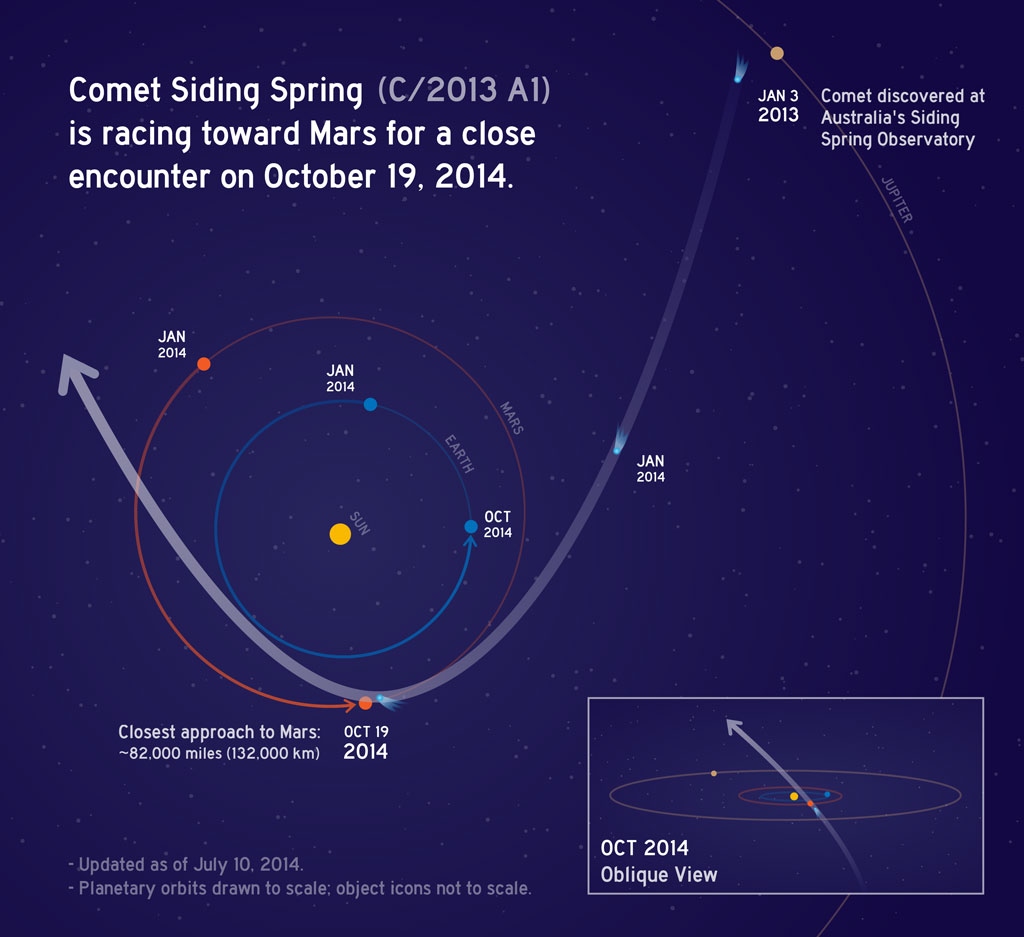 This graphic depicts the orbit of comet C/2013 A1 Siding Spring as it swings around the sun in 2014. Credit: NASA/JPL-Caltech

NASA will gather valuable scientific data, as Comet C/2013 A1 Siding Spring heads toward a close flyby of Mars on Oct. 19.

The comet’s nucleus will miss Mars by about 82,000 miles (132,000 kilometers), shedding material hurtling at about 35 miles (56 kilometers) per second, relative to Mars and Mars-orbiting spacecraft. At that velocity, even the smallest particle — estimated to be about one-fiftieth of an inch (half a millimeter) across — could cause significant damage to a spacecraft. Using constraints provided by Earth-based observations, the modeling results indicate that the hazard is not as great as first anticipated.

Still, the comet will pass much closer to Mars than any comet has passed by the Earth in last 500 years. The smallest distance between Siding Spring’s nucleus and Mars will be less than one-tenth the distance of any known previous Earthly comet flyby. The period of greatest risk to orbiting spacecraft will start about 90 minutes later and last about 20 minutes, when Mars will come closest to the center of the widening dust trail from the nucleus.

NASA currently operates two Mars orbiters, with a third on its way and expected to arrive in Martian orbit just a month before the comet flyby. NASA’s Mars Reconnaissance Orbiter (MRO) made one orbit-adjustment maneuver on July 2 as part of the process of repositioning the spacecraft for the Oct. 19 event. An additional maneuver is planned for Aug. 27. The team operating NASA’s Mars Odyssey orbiter is planning a similar maneuver on Aug. 5 to put that spacecraft on track to be in the right place at the right time, as well. NASA’s Mars Atmosphere and Volatile Evolution (MAVEN) spacecraft is on its way to the Red Planet and will enter orbit on Sept. 21. The MAVEN team is planning to conduct a precautionary maneuver on Oct. 9, prior to the start of the mission’s main science phase in early November.

In the days before and after the comet’s flyby, NASA will study the comet by taking advantage of how close it comes to Mars. Researchers plan to use several instruments on the Mars orbiters to study the nucleus, the coma surrounding the nucleus, and the tail of Siding Spring, as well as the possible effects on the Martian atmosphere. This particular comet has never before entered the inner solar system, so it will provide a fresh source of clues to our solar system’s earliest days.

Jim Green, Director of Planetary Science at NASA Headquarters, made the point that all of the assets at Mars at the time of the comets closest approach will be like getting a bunch of close comet flyby missions for free!

Mike Mumma, a Senior Scientist in the Solar System Exploration Division at NASA/Goddard Space Flight Center, and Director of Goddard’s Center for Astrobiology, suggested training the instruments to look at Mars, and not the comet, because “we have never had the chance to see how a planet interacts with a large gas cloud at extremely high velocity, such as its pass-through of the coma will provide.”

MAVEN plans to study gases coming off the comet’s nucleus into its coma as it is warmed by the sun. MAVEN also will look for effects the comet flyby may have on the planet’s upper atmosphere and observe the comet as it travels through the solar wind.

Odyssey will study thermal and spectral properties of the comet’s coma and tail. MRO will monitor Mars’ atmosphere for possible temperature increases and cloud formation, as well as changes in electron density at high altitudes. The MRO team also plans to study gases in the comet’s coma. Along with other MRO observations, the team anticipates this event will yield detailed views of the comet’s nucleus and potentially reveal its rotation rate and surface features.

Mars’ atmosphere, though much thinner than Earth’s, is thick enough that NASA does not anticipate any hazard to the Opportunity and Curiosity rovers on the planet’s surface, even if dust particles from the comet hit the atmosphere and form into meteors. Rover cameras may be used to observe the comet before the flyby, and to monitor the atmosphere for meteors while the comet’s dust trail is closest to the planet.
Observations from Earth-based and space telescopes provided data used for modeling to make predictions about Siding Spring’s Mars flyby, which were in turn used for planning protective maneuvers. The three modeling teams were headed by researchers at the University of Maryland in College Park, the Planetary Science Institute in Tucson, Arizona, and JPL.

For more information about the Mars flyby of comet Siding Spring, visit:
https://mars.nasa.gov/comets/sidingspring