Connecting the Next Generation of Science Journalists with Scientists in Action

As scientific advances and controversies flood the media, journalists with strong scientific backgrounds must ensure that complex science is portrayed accurately. Science journalists see evidence-based reporting with scientific explanation and argumentation as essential tenets of their work. NASA’s Remote, In Situ, and Synchrotron Studies for Science and Exploration (RIS4E; pronounced “rise”) team recognizes this need, and in collaboration with the Stony Brook University School of Journalism and the Alan Alda Center for Communicating Science, created the RIS4E Science Journalism Program.

This innovative program uses RIS4E research to help journalism students strengthen their understanding of the practice of science and learn to report more effectively and accurately on scientific research. RIS4E begins with a semester-long science journalism practicum and culminates with a field experience in which students report on active NASA planetary science field research. This is the first program to engage undergraduate and graduate journalism students as a team in a deep, extended investigation of a NASA research effort.

The RIS4E Science Journalism Program
The RIS4E team is part of NASA’s Solar System Exploration Research Virtual Institute (SSERVI). SSERVI scientists study the Moon, moons of Mars, and near-Earth asteroids as potential targets for future robotic and human exploration by NASA. RIS4E takes a comprehensive approach to this investigation to maximize scientific return throughout the exploration process—from remotely sensed spectral data preparation for safe and efficient human surface exploration to analysis of small, precious returned samples. The team simulates astronaut exploration of extraterrestrial surfaces in planetary analog environments, such as volcanic terrains in Hawaiʻi, and analyzes extraterrestrial materials, including their possible effects on human health, at some of the most technologically advanced research facilities on Earth. RIS4E student journalists report on each aspect of this multi-layered program.

Six undergraduates and two graduate students were competitively selected to participate in the first RIS4E practicum in the spring of 2015. This course, offered through the Stony Brook University School of Journalism, was modeled after the university’s successful Journalism Without Walls program, which gives students hands-on, practical experience in reporting beyond their campus. The students learned about RIS4E research directly from the RIS4E science team. RIS4E scientists visited their classrooms, sat for one-on-one interviews, and provided tours of their laboratories. The students practiced interviewing and reporting all semester and prepared for the physically harsh conditions of working in the field. Students learned science-writing fundamentals and explored the business of science. On a trip to NASA’s Goddard Space Flight Center, students met with NASA science writers to learn about navigating a career path in science journalism.

Reporting from the Field
After completing the practicum, five students, accompanied by a journalism professor, a teaching assistant, and NASA education specialists, joined the RIS4E team during the 2015 field season at Kīlauea’s December 1974 lava flow on the Island of Hawaiʻi. Volcanic gasses from Kīlauea have altered the basalt and overlying sediments in the area, resulting in volcanic terrain analogous to basaltic terrains found on other planets and satellites. RIS4E scientists study this site to better understand planetary volcanism and igneous processes, and to test state-of-the-art field equipment and techniques to make recommendations to NASA about developing portable scientific instruments for astronauts to use for exploring the Solar System.

The journalism students reported on the entire 10-day field campaign, from setup and weather-related changes in plans to data analysis and investigation of questions that arose as a result of field discoveries. The students took hundreds of photos, recorded dozens of hours of video footage, and interviewed scientists both as they worked and after hours. Their role was to document planetary science fieldwork in action: to watch the scientists do their work, find out why it matters, and share it with the world.

In addition to reporting on RIS4E, each student pursued and published related science stories. For example, one student was intrigued by a simulated Mars habitat called HI-SEAS (Hawaiʻi Space Exploration Analog and Simulation); others explored the heated debate over the construction of a 30-meter telescope on Mauna Kea. Professors ensured that each student reported not only on a unique aspect of the RIS4E field campaign but also that students worked together to paint a picture of the integrated research effort in rich, complementary colors. The students posted daily blog updates, shared highlights from the field through social media, and ultimately presented their polished work on a collaboratively designed public website: https://reportingRIS4E.com/. 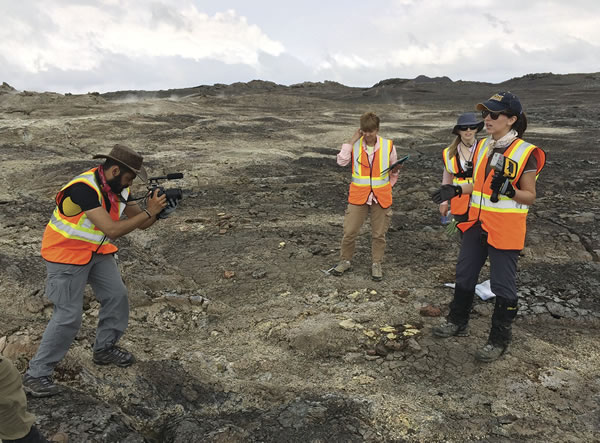 Program Foundations and Innovations
The RIS4E science team, NASA education specialists, and journalism professors with decades of professional print and video journalism experience worked together to develop a program that would provide an immersive, stimulating experience for learners over an extended period of time. Before field deployment, science and journalism leads discussed how to navigate difficult situations, such as how to best maintain journalistic integrity and impartiality, while respecting the need for scientists’ downtime after intense days in the field. NASA educators helped answer questions and provided coordination between the science team, journalism professors, and students. They also arranged tours of science and cultural facilities to broaden students’ perspectives on Hawaiian science, life, and culture.

Program Feedback
Student feedback was overwhelmingly positive. Students reported a better understanding of how scientific research is conducted and the time scales over which it takes place, increased awareness of interconnections between scientific fields, and knowledge of what scientists’ careers are really like. One student commented, “The scientific method was abundantly in use in the field, and this sort of hands-on exposure is something that I believe everyone should take part in at some point.” Another said, “Seeing people who love what they do in action is the best sort of education I can imagine.” Students reported gains in practical science-journalism experience: They learned the benefits of planning by setting priorities, laying groundwork, and early action, such as conducting film interviews at the start of the field camp in case they needed to reshoot). They became familiar with journalism equipment (such as microphones that reduce wind noise) and preparation (such as a background in broadcast journalism) that aid reporting in the field: “In the field you only get one shot to get what you need.” They also gained confidence in reporting on scientific research: “In the field I proved to myself that I am capable of doing reporting and videography alone outdoors.” Survey results indicate that the majority of participants are more likely to pursue science journalism as a career as a result of participating in this program. Student recommendations for improving the program included providing access to more examples of science journalism products, spending more time in the field, and setting clearer expectations for finished products.

Scientists reported that discussing their research with students helped them to improve their own communication skills. They liked how the student website made their research more accessible to the public. Scientists recommended encouraging students to seek feedback before posting their stories, saying, “Scientific journalism should involve having the student go back to the scientist to see if the science was portrayed accurately and adequately.”

Suggestions from students and scientists will help the RIS4E team prepare the second RIS4E Science Journalism Program, to be held in 2017.