NASA is researching how best to keep astronauts physically and mentally healthy during months, or even years, aboard a small spacecraft hurtling through space. The answers aren’t simple. Through years of effort, NASA and its international and commercial partners have evolved a network of support structures that maintain astronauts’ mental and physical health throughout their months of hard work in an isolated, extreme environment.

Because astronauts’ health and safety are paramount in human spaceflight, NASA constantly strives to make life better for crews as they push the frontiers of human knowledge in deep space.

HERA is a simulated spacecraft in which crews of “astronaut-like” volunteers live for weeks, allowing scientists to examine the physical and psychological effects of long-term isolation in a stressful environment to advance the cause of human spaceflight.

The mission began after the crew underwent a comprehensive medical and psychological screening similar to what astronaut hopefuls go through. Having been deemed suitable in mental and physical health, the crew was selected from a pool of applicants, consisting of a geologist and engineer, an Air Force Reserve officer, a medical doctor, and an image scientist.

Together they flew a simulated mission to the asteroid Geographos. An actual mission to Geographos would take about 715 days – but NASA compressed the mission into 30 days. Before “launch” the crew became very familiar with astronaut training. Over the course of two weeks prior to the mission, they took classes on the spacecraft systems and the science experiments that would be conducted onboard. This crash course in spaceflight prepared the crew to seal themselves into the HERA habitat for an entire month!

Finally, “Ingress Day” arrived. Dressed in their team flight suits – black, with their mission patch standing out proudly– the crew were issued a warm sendoff. “Final Countdown” blared over the speakers as a large countdown clock spiraled down to zero. There were a few handshakes, a few steps up into the ‘Hab’… and the door closed behind them. They wouldn’t see the other side of it for 30 days!

The HERA habitat is an upright cylinder 2.5 stories tall. The first level is the “workshop,” with a workbench, medical station, science glovebox, piloting station, and the controls for a robotic arm that the crew would control during the mission. A small airlock protrudes from one side, while the “hygiene module” (the bathroom) extends from a hatch opposite. In the center of the module, a ladder leads up to Level 2.

Level 2 is the living area of the spacecraft. There the team could sit comfortably around the galley table, adjacent to a small kitchen, and enjoy a movie in the evenings. Much of the food was stored on L2, in Space Shuttle-style storage lockers adjacent to an exercise area. The space was just large enough for an exercise bike and a clever set of weights, which nested together and allowed adjustments to varying levels of exertion.

Finally, two short ladders in opposing corners of L2 led up to their sleep stations. Roughly the size of a 2-man tent, the crew quarters were sheathed in thick, padded fabric to mute outside noises. Combined with a memory foam mattress and a pillow brought from home, they were very cozy!

Days aboard the spacecraft were very similar to those of astronauts aboard the International Space Station (ISS). After waking up and crawling down from their sleep stations, the days began with breakfast and time to prepare for the day ahead. The crew lived on a timeline, just like “real” astronauts, following a daily schedule determined by the Mission Control Center (MCC). Daily activities varied and ran the gamut of maintenance, scientific experiments, and adventure!

Just as if they were on a real spacecraft, the crew had to perform various tasks to keep the spacecraft running smoothly during the trip to Geographos and back. The crew also performed scientific experiments on themselves, to better understand how human bodies and minds respond to long-term stress and isolation, with a few fun experiments to keep them busy! During the course of the mission they raised brine shrimp, grew plants in a hydroponics unit, analyzed geologic samples, and used the spacecraft’s robotic arm. 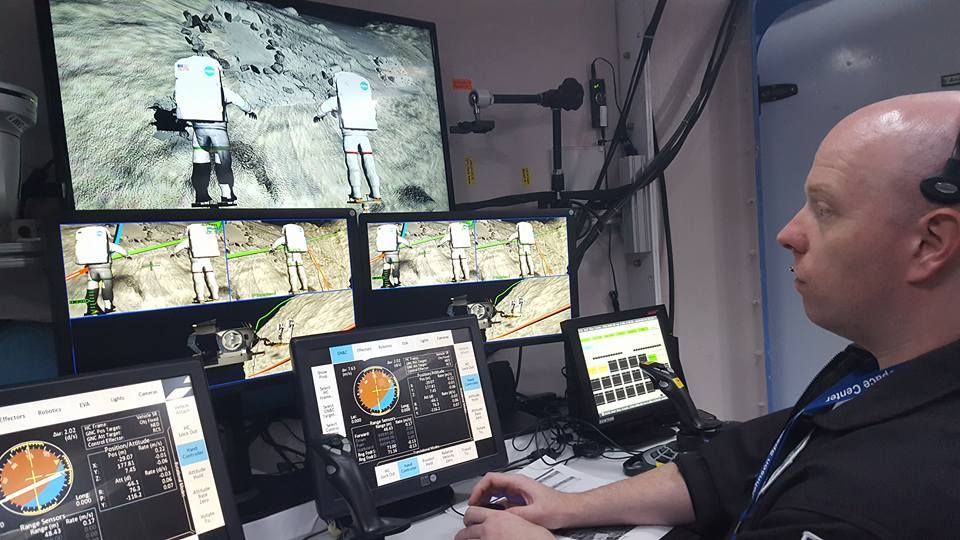 The Commander flies the MMSEV to the surface of Geographos. Out the “window,” two spacewalking crewmembers are along for the ride. Credit: T. Caswell

Though the true purpose of each HERA mission is to understand the medical and psychological effects of prolonged isolation on the crew, they had a simulated mission to accomplish: exploring Geographos! The simulated spacecraft arrived at the asteroid halfway through the mission. It was awesome! The crew conducted several expeditions down to the asteroid’s surface over a three-day-long rendezvous, collecting geologic samples to return to Earth. These “extravehicular activities,” or spacewalks, were done via virtual reality. The team flew a small pod, called the “Multi-Mission Surface Exploration Vehicle” (or MMSEV), to the surface of the asteroid. Once there two members of the crew got to spacewalk on the surface! Much of the mission was devoted to training for those three excursions.

One of the more challenging aspects of the mission was the isolation itself. Just like astronauts going to deep space, the crew had limited contact with their families and were only able to speak with them for a half hour about once a week. They didn’t even have email, but it was always a highlight of the week to catch up on how things were going “back on Earth.” 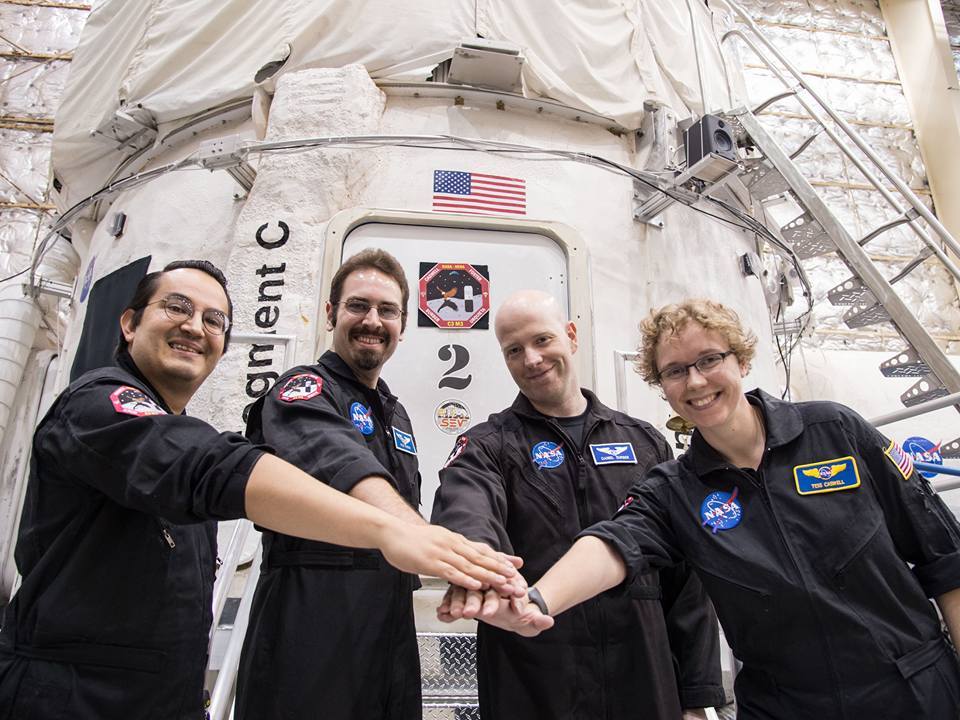 Egress day. Still a team, even after a month in a tin can together! Credit: T. Caswell

After a month onboard the spacecraft, it was time to come home. “Egress Day” had a surreal quality. Soon the shiny silver door would be open once again. The crew all felt how quickly the time passed! They were satisfied with a mission well-done, but they were already lamenting the end of a month living the life of an astronaut and each felt honored to have played a role in building the future of human spaceflight.