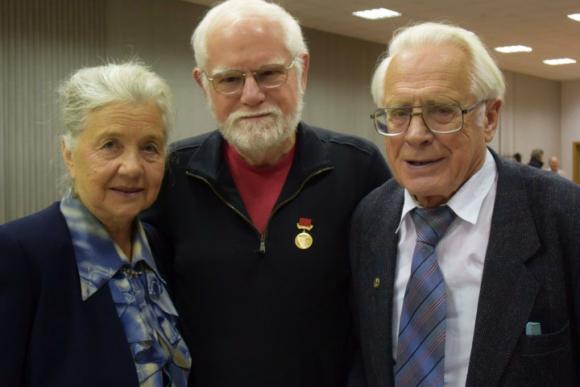 The planetary science collaboration between Brown University and Russia’s V.I. Vernadsky Institute has grown over more than four decades, surmounting Cold War hostilities and geographic distance to build an astonishing record of scientific discoveries about the solar system. Participants gathered recently in Moscow to celebrate those contributions and Brown University’s 250th anniversary celebration.

For more than 40 years, through Cold War tension and political unrest, James W. Head, the Louis and Elizabeth Scherck Distinguished Professor of the Geological Sciences and SSERVI Co-I, has spearheaded a scientific collaboration between planetary scientists at Brown University and Russia’s V.I. Vernadsky Institute. At a celebration of Brown’s 250th anniversary in Moscow last week, Head was honored for his contributions to space science and to international cooperation with the M.V. Keldysh Medal from the Russian Cosmonautics Federation.

“It was truly a tremendous honor,” Head said of the award, which is named for a scientist who helped lead the burgeoning Soviet space program in the 1950s and 1960s. “The event was a great opportunity to celebrate with colleagues and students and share some of the history of this extremely fruitful collaboration that remains strong today.”

The Brown 250th celebration took place at the Fifth Moscow International Solar System Symposium, where Head and his students presented several research papers and posters. U.S. and Russian scientists — and several Brown students, parents, and alumni — were greeted at the celebration by a video message from Brown President Christina Paxson. Head presented a brief history of Brown and was joined by his Russian colleagues to discuss the historic ties between Brown and the Vernadsky Institute.

40-plus years of collaboration

The collaboration between Brown and the Vernadsky Institute began in 1973. Head was part of a delegation of U.S. scientist who traveled to Moscow for the first joint U.S.-Soviet planetary science meeting. It was there that Head met Valery Barsukov, who was head of the Vernadsky Institute and a key player in solar system exploration for the Soviet space agency. The two became fast friends.

“He was an incredible guy,” Head said. “He was really interested in finding ways to work together.”

Barsukov showed Head some images of the surface of Venus taken by a Soviet Venera lander probe. Data on Venus from U.S. spacecraft were sparse at the time, and Head was clearly enthralled by what he was seeing.

“Barsukov asked me,” Head said, “‘Why don’t you come back to Moscow to study these with us?’” Head jumped at the chance, returning the following year with one of his graduate students.

“We had a blast,” said Head. “It went so well that we decided that this could be the start of something bigger.”

Shortly after, the collaboration was formalized as the Brown-Vernadsky agreement. Under the agreement, the two sides pledged to share data from each country’s planetary missions, exchange scientists and students, and hold twice-yearly meetings, one in the United States and one in Moscow.

The first data exchange under the agreement gave U.S. scientists access to data tapes generated by the Venera probes to the surface of Venus. Getting access to those data was no easy task. All the tapes had to be “sanitized” of technical information that might reveal state secrets — the location of Soviet radar ground stations, for example. But in the end, the scientific data were shared. This was later followed by 21 digital data tapes for the Venera 15/16 missions, giving U.S. scientists access to what was at the time the richest dataset available on our nearest planetary neighbor.

The data exchange was a boon to U.S. scientists in the 1980s, Head said. “They flew 14 planetary missions in the ’80s while we flew none, so we definitely made out on the deal.”

Head also became a guest investigator on the Soviet Venera 15/16 missions, the Vega Mission to Venus and Halley’s Comet, and Soviet missions to the Martian moon Phobos. He continues to work with Russian scientists on a future sample-return mission to Phobos and landing site selection for Russian lunar missions.

By 1990, the United States was able to reciprocate. Several prominent Soviet scientists were invited to be guest investigators on NASA’s Magellan mission to Venus — a mission that produced the first global radar map of the Venusian surface.

The scientific meetings held under the agreement, dubbed microsymposia, were another important component in keeping warm relations between the two sides, according to Head.

“It kept up the personal interactions even when the political situation deteriorated in the 1980s,” he said. “That was critical.”

The microsymposia are still held today. The most recent, held last March, brought Russian scientists together with U.S. scientists and astronauts to discuss targets for future human exploration of the solar system.

Over the years, the Brown-Vernadsky collaboration has produced hundreds of publications and conference presentations and provided new insight into the formation of the inner solar system. But perhaps most important to Head is the impact the partnership has had on his students — an impact that many continue to carry with them in prominent careers.

“For example, Brown planetary geoscience graduate students Jim Garvin and Ellen Stofan visited Moscow and completed joint projects with their Russian colleagues on Soviet spacecraft data from Venus,” Head said. “Each went on to become NASA chief scientist, carrying with them knowledge of the science, missions, and colleagues obtained early in their careers.”

In presenting Head with the Keldysh Medal, Lev Zelenyi, vice president of the Russian Academy of Sciences and director of the Space Research Institute, said he has long been impressed by the breadth and breadth of knowledge of Head’s undergraduate and graduate students: “I became convinced that that the requirement to know everything [was] included in the training program at Brown.”