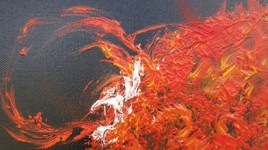 Visual artists working with film, sounds, performance and new technologies are having a dialogue between art and science. With its combination of astronomy, radio technologies and art, OPTICKS aims at inspiring artists, scientists and amateurs alike.

In October 2009 a team of radio amateurs based at Dwingeloo radio telescope in the Netherlands sent images in the form of radio signals to the moon and back as part of an art project. It was the first time in history that color images had been bounced off the Moon.

OPTICKS is a live performance using Earth-Moon-Earth technology. The images are sent in form of radio signals from a dish situated in Brazil, the UK or Switzerland and received back by Dwingeloo radio telescope in the Netherlands, where they are reconverted into the original images. The process of converting radio signals into images and vice versa is made possible by MMSSTV software invented by Japanese radio amateur Makoto Mori in 2000.

The April 10th OPTICKS Global Astronomy Month performance will be webstreamed live from Dwingeloo radio telescope! This event will introduce the Moon Week program, which features a wide range of outreach activities aimed at scientists, astronomers and astronomy enthusiasts. The performance will be a live broadcast of radio signals bouncing off the moon, captured by the Dwingeloo antenna. The performance will also feature pre-recorded image sonifications using Design Rhythmics Sonification Research Lab methods, created by sonification researcher and musician/sound designer Marty Quinn, currently collaborating with NASA.

Researchers at the Dwingoole Telescope receive images after they have bounced off the Moon. Credit: OPTICKS.

Here is the OPTICKS ustream link for April 10th (viewers will need to search for the OPTICKS event): https://www.ustream.tv/channel/pi9cam

The idea of calling the project OPTICKS was inspired by an essay written by Newton on light refraction. In OPTICKS the great scientist speaks of the seven colors of the spectrum. He also writes about the music circle in which he relates the seven colors with the musical notes and the seven celestial bodies known in his time.