The New Museum Los Gatos (NUMU) is proud to partner with the Lunar Orbiter Image Recovery Project (LOIRP) and NASA to honor the 50th anniversary of the lunar orbiter with a spectacular museum exhibit, featuring original lunar images from 1966-1967.

The McMoons exhibition’s mission is twofold: to shine a light on the 50th anniversary of NASA’s (196768) Lunar Orbiter Project that collected lunar images integral to the safe landing on the first Apollo landing on the Moon, and to tell the little-known story of the Lunar Orbiter Image Recovery Project (LOIRP) that began in 2008 to recover the original NASA Lunar Orbiter images.

This exhibit will follow the rag-tag band of dedicated scientists, former NASA employees, and a couple of twelve-year-old interns who saved these irreplaceable pieces of space history. McMoons will take the visitor on an extraordinary journey from a dilapidated storage space to a veterinarian’s garage in central California and on to an abandoned McDonald’s restaurant on the Moffett NASA campus in Sunnyvale, California, where archival space history is still being made today.

The exhibition includes original prints from the Lunar Orbiter Project and digitized prints of the original film including a wall-sized reproduction of the first restored image of the Earth rising. Visitors can also see and touch the original film canisters and tapes and listen to original audio recordings from the Lunar Orbiter Project. Also on view are prints and video of the LOIRP Project still underway at the McDonalds “lab” on the NASA campus.

Background
In the middle of the Sunnyvale NASA campus, an unseemly McDonald’s building sits alone on its lot, dwarfed by the massive skeleton of Hangar One looming behind it. It still bears the yellow and brown colors, drive up window, and slightly flipped edge roof top of the iconic food chain. But this McDonald’s building does not dispense golden, crispy French fries or Quarter Pounders; it’s the unsuspecting nerve center of one of the most significant data recovery projects in moon landing history.

Before the Eagle could land and Neil Armstrong uttered his famous words about giant leaps for mankind, NASA had to conduct a vital series of unmanned lunar orbital missions to determine exactly where the astronauts could safely land on the moon.

Despite the imperative nature of the project, the images were almost destroyed two decades later. Due to neglect and indifference over time, the original data, stored on large tape reels, was nearly lost. Now, fifty years after the Lunar Orbiter project, this vital piece of lunar mission history has been saved, enhanced and is being digitized thanks to the tenacity and foresight of a handful of self described “technoarchaeologists.” 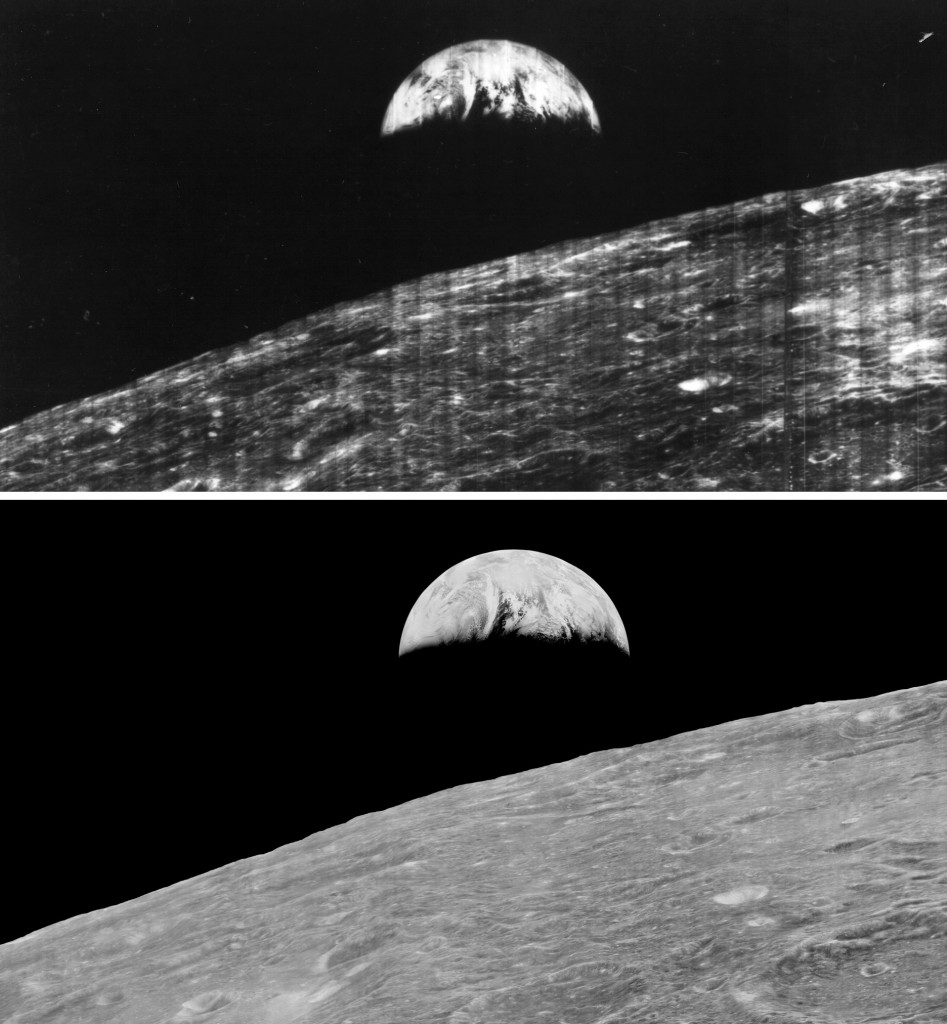 Comparison of the original Earthrise image as seen by the public in 1966 and the restored image released in 2008. Credit: LOIRP/NASA

For details on the LOIRP project go to their site at: https://www.moonviews.com

Join us as we talk to LOIRP founder Dennis Wingo and former intern Casey Harper about this extraordinary tale of recovery and discovery at New Museum of Los Gatos, CA, Feb 2nd 7-8pm, **free with museum admission**: 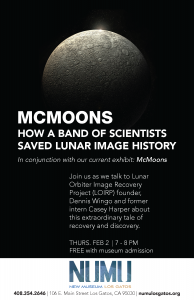 They need your support!
A fundraising campaign seeks to raise funds for the exhibit and LOIRP image preservation expenses. As collaborative partners, NUMU and LOIRP are celebrating the 50th anniversary of the NASA Lunar Orbiter program in a way that sheds light onto a most interesting story of preserving the history of NASA’s Apollo Program.

You can support the McMoons exhibition through the crowdfunding website Indiegogo, and receive perks from limited edition prints, stickers, VIP tickets and so much more. Your donation is 100% tax deductible and directly supports this exhibition.