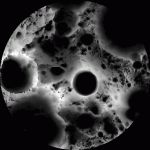 The spin axis of the Moon is tilted by only 1.54° (compared to Earth’s 23.5°), leaving some areas near the poles in permanent shadow while other nearby regions remain sunlit for the majority of the year. One of the primary objectives of LROC is to unambiguously identify these regions.

In a six month (six lunar days) period, the LROC Wide Angle Camera (WAC) collected 1,700 images of the South Pole covering the same area. Each image was map projected and converted to a binary image (if the ground was illuminated that pixel was set to one, and if shadowed zero) to differentiate between sunlit and shadowed regions. All the binary images were then stacked, and then for each pixel it was determined what percentage of the time during six months that spot was illuminated. Presto – an illumination map! The LROC team is making daily (which is about 28 Earth days) and yearly illumination maps for both poles. Such maps will provide the foundation for planning future robotic and human missions to the poles.