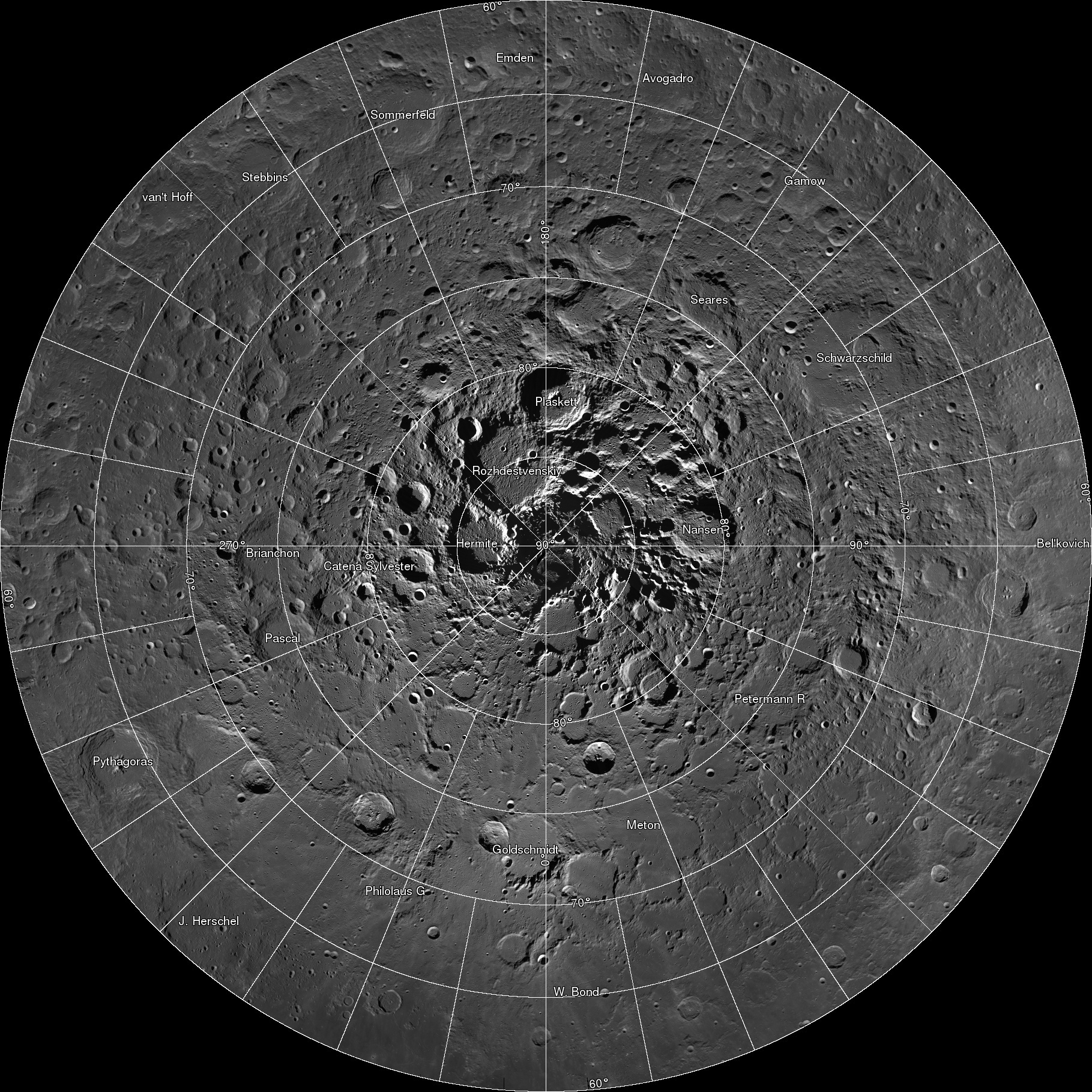 The LROC team assembled 10,581 NAC images, collected over 4 years, into a spectacular northern polar mosaic. The LROC Northern Polar Mosaic (LNPM) is likely one of the world’s largest image mosaics in existence, or at least publicly available on the web, with over 680 gigapixels of valid image data covering a region (2.54 million km2, 0.98 million miles2) slightly larger than the combined area of Alaska (1.72 million km2) and Texas (0.70 million km2) — at a resolution of 2 meters per pixel! To create the mosaic, each LROC NAC image was map projected on a 30 m/pixel Lunar Orbiter Laser Altimeter (LOLA) derived Digital Terrain Model (DTM) using a software package called the Integrated Software for Imagers and Spectrometers (ISIS). 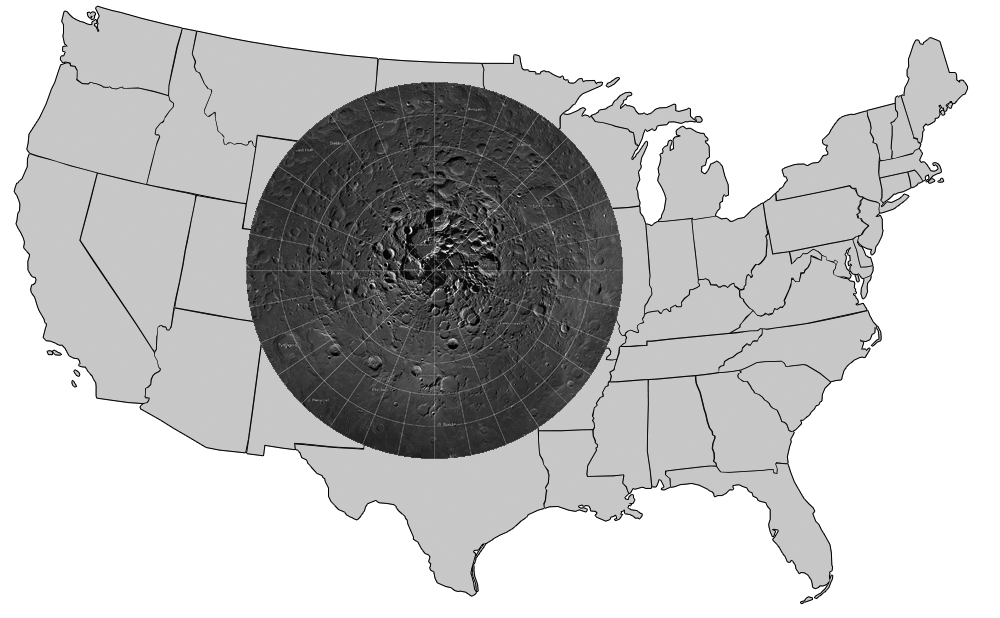 Figure 1. LNPM superposed on map of the United States.

A polar stereographic projection was used in order to limit mapping distortions when creating the 2-D map. In addition, the LROC team used improved ephemeris provide by the LOLA and GRAIL teams and an improved camera pointing model to enable accurate projection of each image in the mosaic to within 20 meters. Almost exactly 3 years ago the LROC team released a Wide Angle Camera (WAC) mosaic of the same north polar region, the pixel scale was 100 meters. The new NAC mosaic is 50x higher resolution! 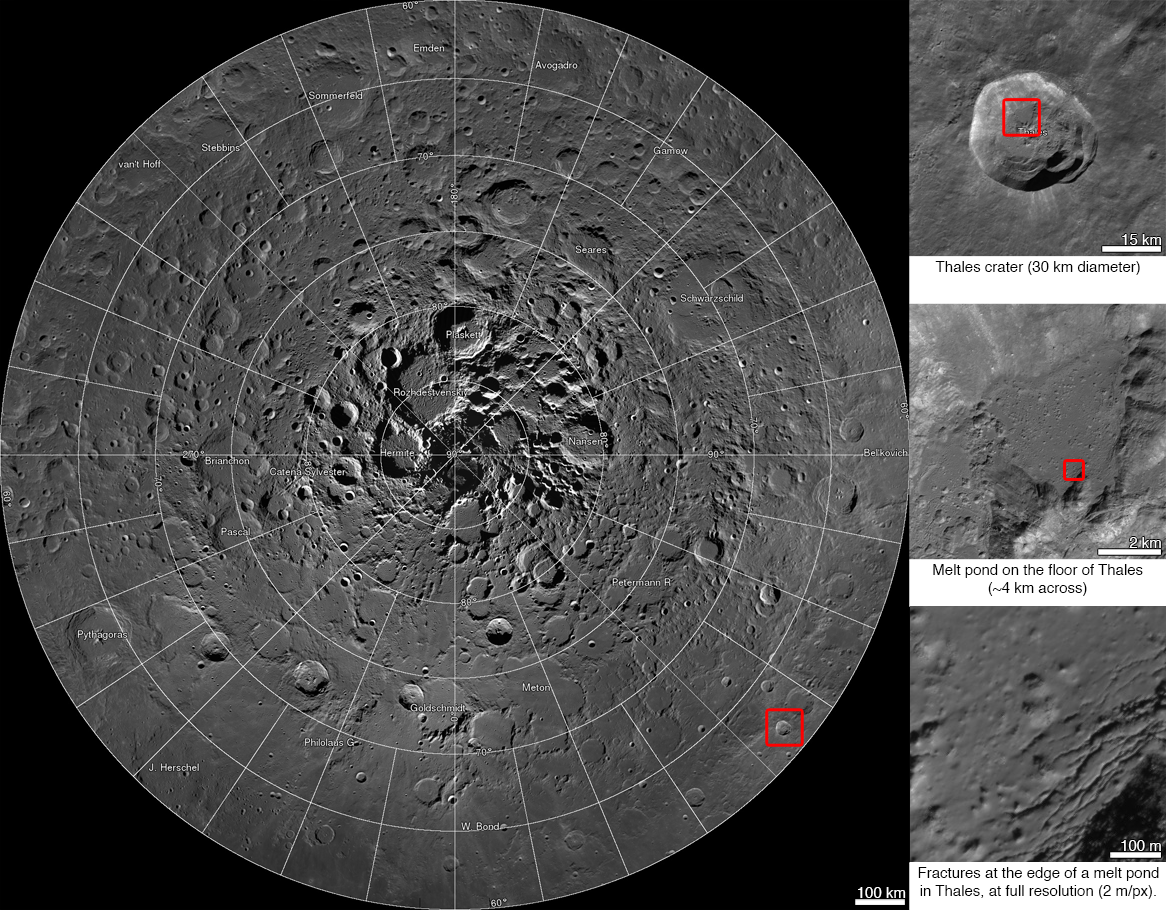 LNPM with three levels of zoom down into Thales crater [NASA/GSFC/Arizona State University].

The LNPM was assembled from individual “collar” mosaics. Each collar mosaic was acquired by imaging the same latitude once every two-hour orbit for a month during which time the rotation of the Moon steadily brought every longitude into view. Each collar mosaic has very similar lighting from start to end and covers 1° to 3° of latitude. 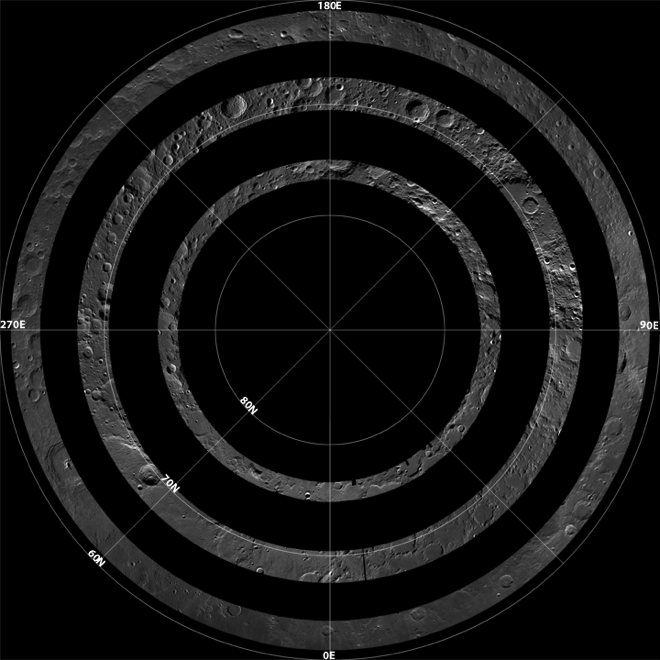 Three collar mosaics illustrating how the images were acquired over time to build the LNPM [NASA/GSFC/Arizona State University].

The Moon does have subtle seasons and the LRO orbit cycles between noon-midnight and terminator orbits (measured as the angle between the spacecraft orbit plane and the sub-solar longitude; known as the beta angle). Lighting at the poles is best during northern summer and when the spacecraft is in noon-midnight orbits (low beta). There are a few gaps in the collar sequences due to spacecraft anomalies and special slewed observations that point the cameras off into space. These gaps were filled with images acquired at other times in the mission. These gap-filling images sometimes have the Sun from the opposite direction of the surrounding collar, resulting in noticeable boundaries. 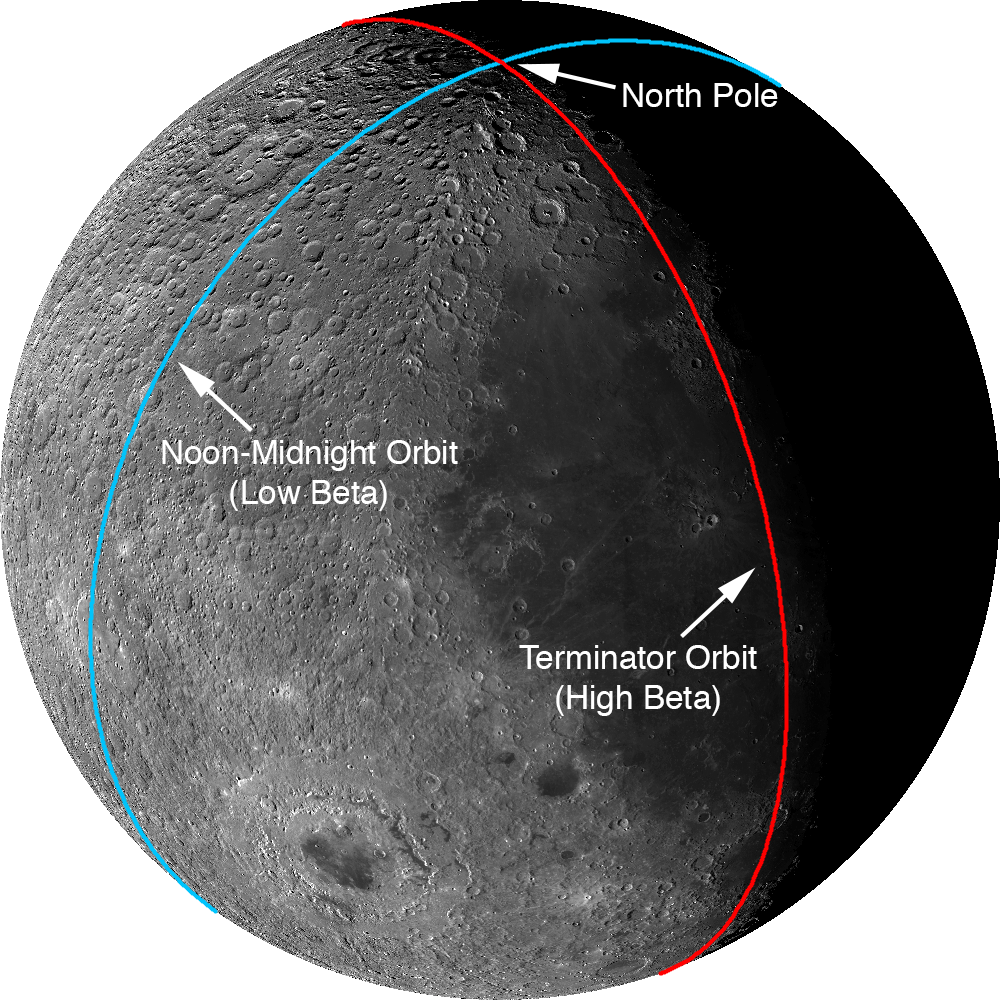 Two types of orbit that LRO experiences through a six-month cycle. Images acquired during terminator orbits have long shadows from the equator to the pole. For noon-midnight orbits the Sun is overhead (no shadows) at the equator and shadows, though still large, are minimized at the poles.

The LNPM was originally assembled as 841 large tiles due to the sheer volume of data: if the mosaic was processed as a single file it would have been approximately 3.3 terabytes in size! Part of the large size is due to the incredible dynamic range of the NACs. The raw images are recorded as 12-bit data (4096 grey levels) then processed to normalized reflectance (a quantitative measure of the percentage of light reflected from each spot on the ground). To preserve the subtle shading gradations of the raw images during processing the NAC images are stored as 32-bit floating-point values (millions of grey levels). The 32-bit values are four times the disk size of the finalized 8-bit (255 grey levels) representation most computers use to display greyscale images. The conversion process from 32-bit to 8-bit pixels results in saturation (group of pixels all with the maximum value of 255) in the brightest areas. 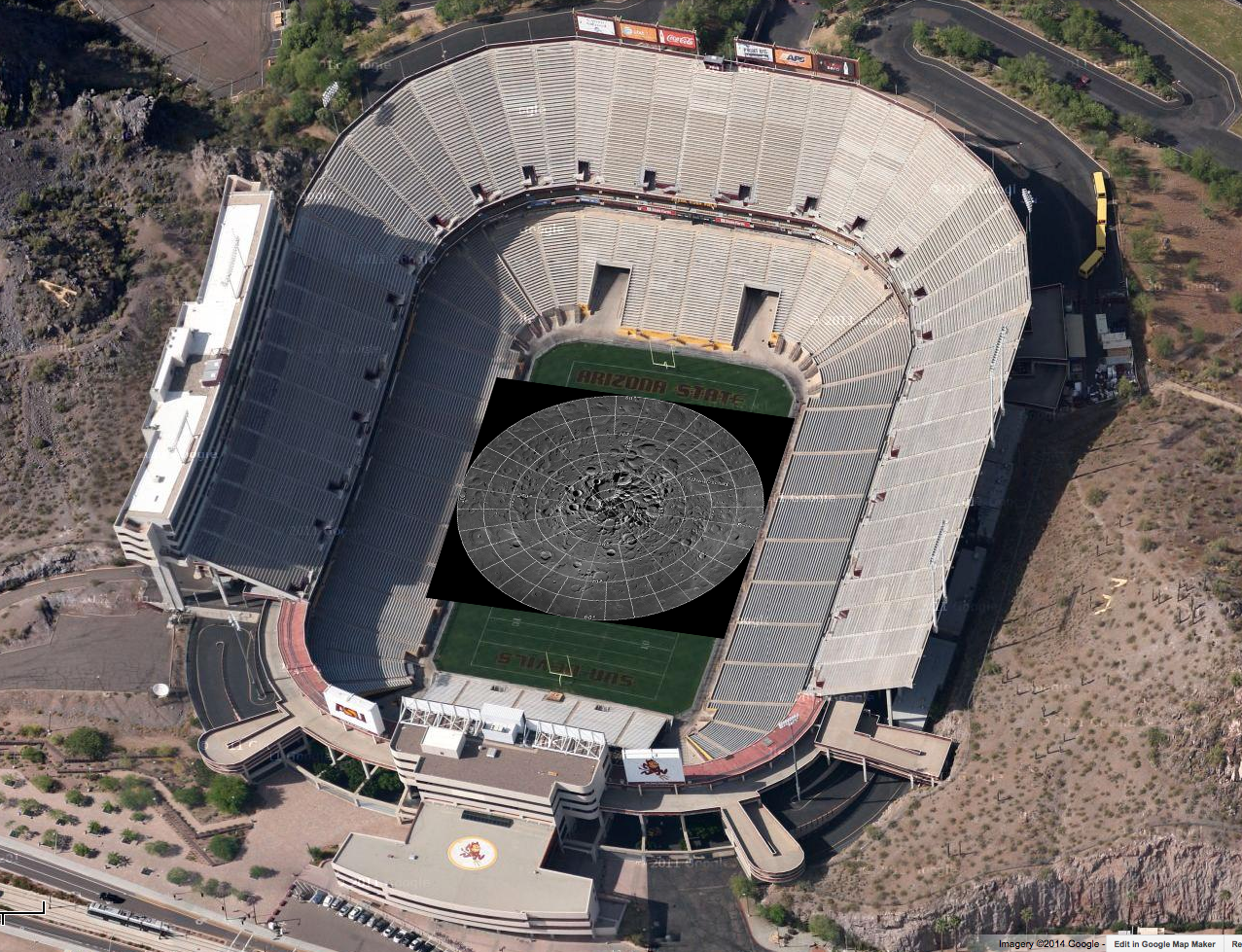 Printed at 300 dpi (a high-quality printing resolution that requires you to peer very closely to distinguish pixels), the LNPM would be larger than a football field.

Even with the conversion, the compressed JPEG images that make up the final product take up almost a terabyte of disk space. To create the zooming and panning Gigapan version, multiple versions of each large tile (32,768 pixels square) were made at varying pixel scales. Next, appropriate labels and grid lines were added for each zoom level in hopes of keeping the user oriented – no sense in getting lost on the Moon! Finally these larger tiles were split into 256-pixel square images, allowing a web browser on an average network to keep up with the amazing detail (only a few tens of kilobytes are needed to see any given location at full resolution). In total the LROC NAC northern polar mosaic required 17,641,035 small tiles to produce the final product.

Dive right in and explore each of the 681 Gigapixels (681 billion pixels)!