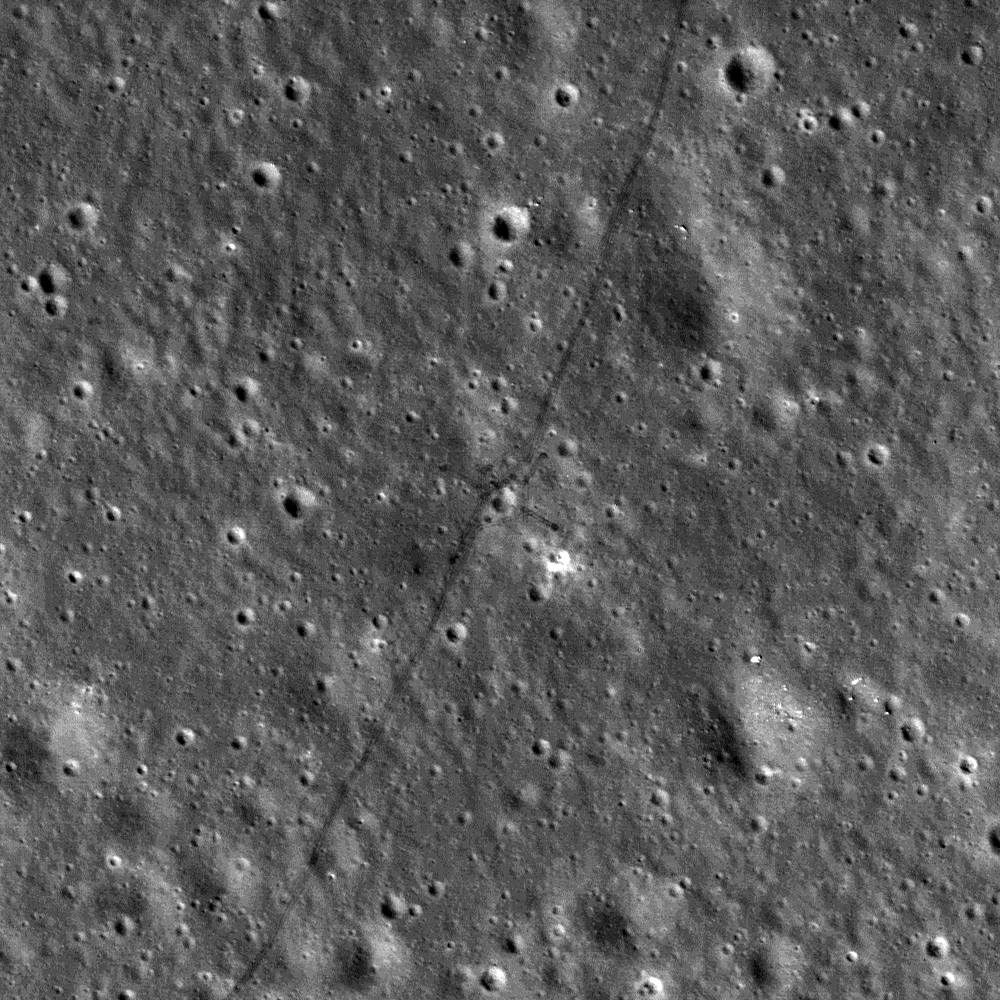 On 15 January 1973, just one month after the successful Apollo 17 mission culminated the US Project Apollo, the Soviet Luna 21 spacecraft landed softly just 170 km north of the Apollo 17 site on the eastern margin of Mare Serenitatis. A day later on 16 January the rover Lunokhod 2 disembarked and, on 18 January, with a full battery charge it circumnavigated and imaged its faithful lander, and then began its record-setting journey across the lunar landscape.

The eight-wheeled rover was operated by controllers in Simferopol, Crimea, mainly using a mast-mounted TV camera and ‘joystick’ controls and roved the lunar surface for five Earth months, surviving four bitterly cold lunar nights (as low as -150 °C (-240 °F)), and racking up about 39 km (~24.4 miles) of traverse distance. The original reported distance was 37 km, which made Lunokhod 2 the planetary rover traverse distance record holder! Along its traverse, Lunokhod 2 carried out a series of scientific experiments that were not well publicized in the United States. Today’s Featured Image shows a cross-like pattern of rover tracks made as Lunokhod 2 explored a small crater, making various scientific measurements.

A typical Lunokhod operations crew included a commander, a navigator, a driver, an engineer, a radio/antenna operator, and one man in reserve.

Tracing the tracks in LROC NAC images, with new accurate geodetic controls that incorporate the latest topographic information from LROC and LOLA, the length of the Lunokhod 2 traverse is now accurately determined and is greater than the originally estimated 37 km. In fact, the intrepid Lunokhod 2 traversed approximately 39 km! The new traverse measurements were carried out by scientists at Moscow State University, and then again by a team at Washington University in St. Louis. The distance measurements follow the complete route shown by the tracks: including a “tripled” segment about 2 km in length, several long, linear magnetometer traverses, and several impact crater crossing maneuvers. 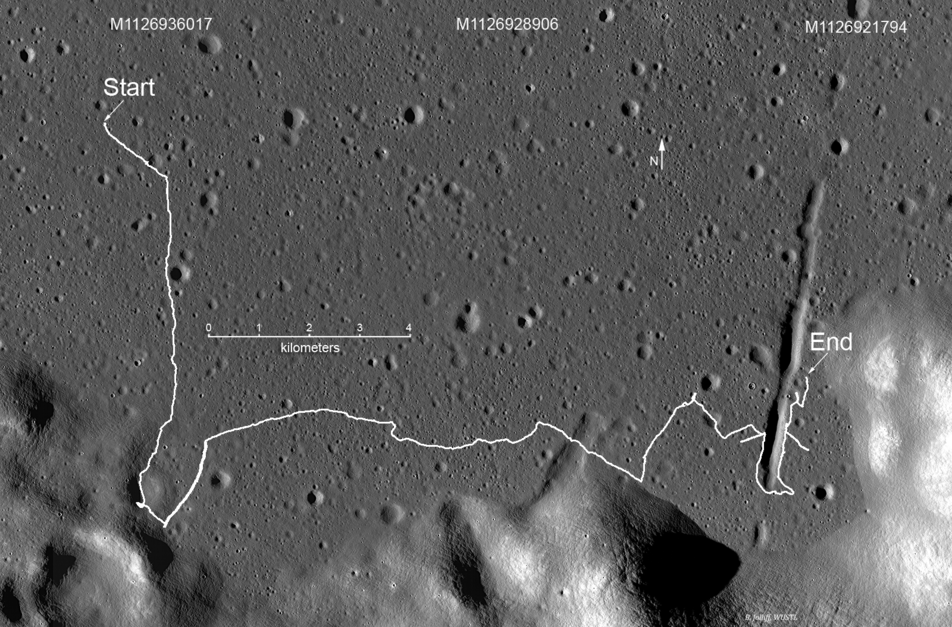 During the Lunokhod 2 mission, as the deputy leader of the Scientific Team and leader of the Geology Group, Dr. Alexander “Sasha” Basilevsky worked tirelessly to maximize the science return of the mission. Meeting this goal was not so easy because the Managing Group (Crew plus representatives of Lavochkin Association, which built the Lunokhods) was mostly thinking about demonstrating the roving and control capability of Lunokhod 2, and establishing a new distance record.

Dr. Basilevsky recounts, “So when moving south from the landing point, we crossed the mare area and reached a hilly terrain (low “highland” terrain). I was planning to study it and then to go north and then east towards a graben later called Fossa Recta. But the managing team did not like long sessions of TV stereo-imaging and other measurements, and they sent Lunokhod back to the north despite my protests. 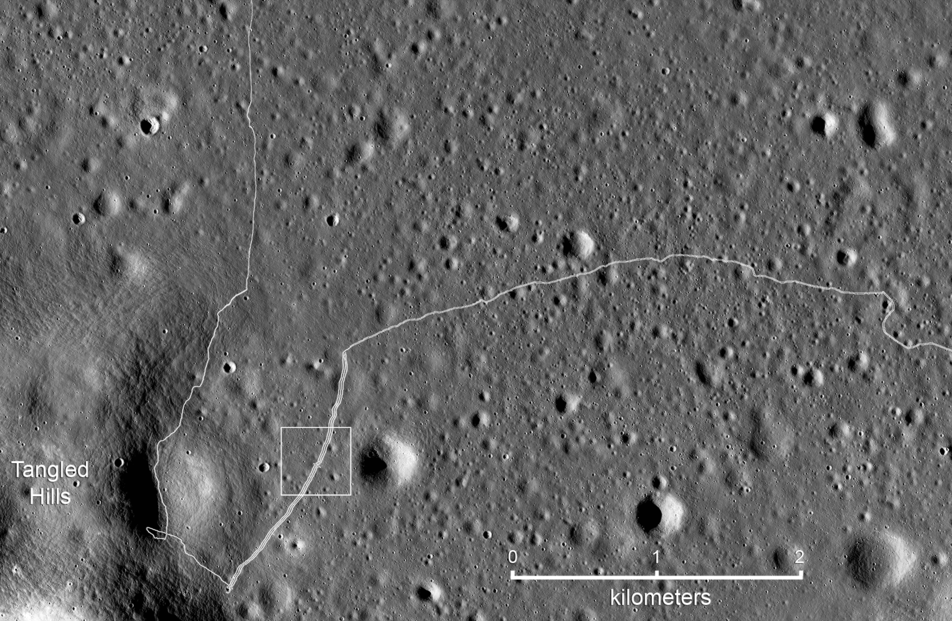 Detail map of the SW portion of the Lunokhod 2 traverse. White box indicates the location of the featured image. Credit: NASA/GSFC/Arizona State University.

“So I called to Moscow to the head of my laboratory, Professor Cyrill Florensky, he called to Vice President of Academy of Sciences Academician Alexander Vinogradov, and Vinogradov called Sergei Kryukov, the Lavochkin Association director, and explained that the hilly terrain had to be studied. Kryukov agreed and called to the Lunokhod Control Center in Crimea where we were and said, ‘please, follow the suggestion of that guy Basilevsky.’

“So the result was good for both sides of the [issue]: For science: we studied [the hilly] terrain, and for the Managing Group: Lunokhod made a lot of meters.”

At the conclusion of the ‘tripled’ traverse segment, Lunokhod 2 had racked up about 17 km of odometry. Controllers then began the long eastward drive to Fossa Recta (‘Straight Rille’), crossing Fossa Inconspicua (‘Unnoticed Rille’) along the way. Magnetometer experiments were done along the tripled traverse to test for effects related to the mare-highland boundary, and later, on the east and west sides of Fossa Recta (see below). Other observations and measurements included soil compositional analyses using an X-ray fluorescence spectrometer, soil mechanics experiments using a penetrometer, solar X-ray monitoring, a photodetector to detect UV light sources and the level of Earth-glow on the night-time Moon, laser ranging, 86 panorama photos, and some 80,000 TV pictures. The laser ranging retroreflector, a French instrument, is still in use today.

On its fourth lunar day of roving, Lunokhod 2 explored a linear depression (graben or rille), Fossa Recta. After approaching the depression, the Lunokhod was driven along a path leading away from its edge to measure any changes in the local magnetic field associated with the depression, and then back along the same path to the edge again. By reversing its direction and retracing its path, the effect of the Lunokhod, itself, on the magnetic signal could be determined and subtracted from the signal. A portion of the panorama taken by Lunokhod 2 when it approached the graben of Fossa Recta is shown below.

Part of the Panorama L2_D04_S11_P09m showing a portion of the Fossa Recta stretching from north (left) to south (right) and a boulder field in the foreground. The sharp object on the left side of the panorama is the soil penetrometer. Credit: Roskosmos and Russian Academy of Sciences

When the panorama was taken, Lunokhod 2 was on the western edge of Fossa Recta, at the position shown above, and boulders on the very edge of the depression are readily seen. The boulders were described in a paper by Basilevsky, Florensky, and Ronca (1977) in a scientific journal, The Moon, Vol. 17, and interpreted as boulders derived from lava bedrock at the edge of a long linear depression. The characteristics observed at the edge of the fossa are similar to those seen by Apollo 15 astronauts Dave Scott and Jim Irwin at Hadley Rille. After exploring Fossa Recta Lunokhod 2 was nowhere near done!

Read the full story with additional images on the LROC Website. Explore a cropped portion of NAC image M122007650R, which covers part of the southwestern and western parts of the traverse, including the location of the featured image. Be sure to check out the full-resolution NAC image where you can zoom in and follow the Lunokhod tracks yourself!