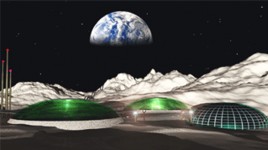 New data about the Moon may help create lunar bases

New data about the Moon may help create lunar bases
Water, resources, and shelter are incentives for future development

Artist rendering of a lunar base. Credit: Richard Kurbis

There is still a very strong focus on the moon. It could be a natural first to go there. Here’s why:

Lunar lava caves may be ideal for moonbases
The discovery of volcanic tunnels on the moon could provide a natural shelter for the first lunar colony.
Researchers have long suspected the moon’s volcanic past left an underground network of lava tubes as its legacy, and 2008 images from Japan’s Kaguya spacecraft showed a possible way down — a mysterious, meters-deep hole breaching the surface.

“This new discovery that the moon may be a rather porous body could significantly alter our approach to founding lunar bases,” veteran spaceman Sergei Krikalyov, who heads Russia’s Star City cosmonaut training center outside Moscow, said at a forum on the future of manned spaceflight.

“If it turns out that the moon has a number of caves that can provide some protection from radiation and meteor showers, it could be an even more interesting destination than previously thought. There wouldn’t be any need to dig the lunar soil and build walls and ceilings,” said Krikalyov. “It would be enough to use an inflatable module with a hard outer shell to — roughly speaking — seal the caves. The caves will protect their dwellers from radiation. The constant temperatures of minus 30 or 40 degrees Celsius are also an important factor,” he said.

The first inflatable modules may be installed robotically without the participation of astronauts. The first such lunar colonies could be built by 2030, estimated Boris Kryuchkov, the deputy science head at the training center.

Valuable Resources
The recent discovery of Titanium on the moon was made by NASA’s Lunar Reconnaissance Orbiter’s (LRO) Wide Angle Camera and a technique known as reflection spectroscopy. Areas of the lunar surface with large proportions of certain minerals will have characteristic color profiles indicative of those minerals. By looking at areas in different wavelengths, you can construct a color profile that will let you know what minerals are dominant. The LRO Wide Angle Camera imaged the Moon in 7 UV and visible wavelengths (321, 360, 415, 566, 604, 643, and 689 nm), resulting in a mosaic of over 4,000 images covering a large portion of the lunar surface.

Colors on the Moon are dominantly controlled by variations in iron and titanium content. The mare regions have low reflectance because they contain relatively high amounts of iron oxide (FeO). Some mare basalts contain unusually high amounts of titanium oxide (TiO2) in addition to iron oxide, making for even lower reflectance. TiO2 also shifts the color of the mare from red to blue. Areas of concentrated titanium abundance, primarily in the form of the mineral ilmenite, were found in patches across the lunar mare regions. Titanium-rich areas were known to exist on the lunar surface prior to the LRO mission. However, the exceptional resolution afforded by LRO allows us to map these and other lunar features with unprecedented detail.

While the total titanium abundance is not known at this point, the data from LRO indicates that these concentrations of titanium on the Moon range from about 1 percent to a little more than 10 percent. On Earth, the highest concentrations rarely get above 3 percent.

Such concentrations of titanium have clear utilitarian value. Titanium, in itself, has numerous important applications that could add a new level of economic incentive for future operations on the Moon. In addition, titanium-rich minerals could be more efficient at retaining solar wind particles, such as helium and hydrogen. These elements could also be valuable resources for future lunar outposts.

Beyond the utilitarian value of these deposits, they have significant scientific value. Mineralogical differences between the Moon and the Earth provide insights into the different histories of the Moon and Earth in terms of their formation and evolution. These deposits are associated with mare material, which largely has its origin in the lunar mantle. Studying mare titanium deposits on the lunar surface therefore has potential to enhance our understanding of the lunar interior.

Water on the Moon
When multiple spacecraft (LRO, LCROSS, Chandrayaan-1, Cassini, and Deep Impact) all found unequivocal evidence for water on the moon it was a boon to possible future lunar bases, acting as a potential source of drinking water and fuel. The new data prompted a critical reexamination of the notion that the moon is dry and found that it is not.

There are potentially two types of water on the moon: that brought from outside sources, such as water-bearing comets striking the surface, or water that originated on the moon.

This second source is thought to possibly come from the interaction of the solar wind with moon rocks and soils. The rocks and regolith that make up the lunar surface are about 45 percent oxygen. The solar wind — the constant stream of charged particles emitted by the sun — are mostly protons, or positively charged hydrogen atoms.

If the charged hydrogens, which are traveling at one-third the speed of light, hit the lunar surface with enough force, they break apart oxygen bonds in soil materials. Where free oxygen and hydrogen exist, there is a high chance that trace amounts of water will form.

The daily dehydration and rehydration of the trace water across the surface leads to the migration of hydroxyl and hydrogen towards the poles where it accumulates in the cold traps of the permanently shadowed regions.

Energy Generation
Several Corporations are looking to the moon as a possible source of energy. Helium-3 mining has long been theorized, but companies like Japan’s Shimizu Corporation are also looking at the potential of generating solar power from the moon.

On Earth, solar power generation is limited at night but in space or on the moon 24/7 continuous clean energy generation is possible. A space-based solar system in continuous sunlight essentially doubles the total power generated on Earth in the same 24 hour period; considerably more effective than Earth-based applications which are limited by long periods of darkness. This makes solar power a more economically viable option, one that could potentially end our reliance on limited natural resources.

The electric power generated by the solar cells would be converted into microwave beams or laser beams, and 20-kilometer-diameter antennas would beam the power to receivers on Earth. The energy would then be converted back to electricity and supplied to existing grids, or possibly converted to hydrogen for fuel or storage.

The Luna Ring: Electric power generated by a belt of solar cells around the lunar equator could be transmitted and beamed to the Earth from the near side of the Moon. Image credit: Shimizu Corporation.

All of these factors– the available shelter, water, resources and potential for power—along with the Moon’s relatively close proximity to Earth, are reasons why we may see the first lunar bases built before 2035. NASA currently has no plans for lunar bases, but ongoing research and technology development are supplying useful planning data. The United States may have put the first man on the moon, but the world’s space agencies, including the Europeans, China, and Russia, are all gazing at a new goal of setting up a colony on the moon.