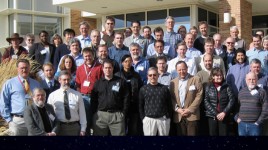 Lunar Dust, Atmosphere and Plasma: The Next Steps

This special volume contains papers presented at the first workshop on Lunar dust, plasma and atmosphere: The next steps (LDAP-2010), which was held January 27–29, 2010 in Boulder, Colorado, USA.

The LDAP workshop had over 80 participants, representing a wide spectrum from undergraduate students, to young assistant professors, to leading scientists from the Apollo era. The workshop was organized by the NASA Lunar Science Institute’s (NLSI) Colorado Center for Lunar Dust and Atmospheric Studies (CCLDAS).

The meeting was a forum to discuss our current understanding of the lunar atmosphere, including atmosphere–surface interactions, and to share results from past and still ongoing missions. It focused on the open science questions, the status of our modeling and laboratory experimental capabilities, required measurements, and instrument capabilities for future investigations on orbit, or to be deployed on the lunar surface.

The workshop abstracts and the presentations are available online at: https://lpa2010.colorado.edu/

This special issue is a collection of 14 articles summarizing many aspects of the LDAP-2010 Workshop. The papers show significant advances in the reanalysis of Apollo era observations of the dust and plasma environment of the Moon, and more recent observations by Clementine, Lunar Prospector, Lunar Reconnaissance Orbiter/LCROSS, and Kaguya. New computer simulations results address the large-scale interaction of the solar wind plasma flow with the lunar surface with much improved physics involving the description of the near-surface plasma environment, including hybrid and fully kinetic techniques. New laboratory experiments are included to address the basic physical process acting on the dust grains on the lunar surface, possibly providing improved dust hazard mitigation approaches to ensure the long-term operations of optical surfaces and exposed mobile mechanical parts. Additionally, new instrumentation ideas are discussed to map the chemical composition of the lunar regolith from orbit.

A new fleet of missions will be making observations of the Moon in the near future. These include ARTHEMIS already at the Moon, the recently launched GRAIL mission, the LADEE mission to be launched in 2013, and Chandrayaan-2 in 2014. The Moon remains an attractive target to study many of the processes that shape the surfaces of airless bodies throughout the solar system. In addition to observations from orbit, there are ongoing efforts to develop instrumentation for making fields, plasma, dust, and atmospheric measurements on the lunar surface.

A follow-up workshop, Lunar Dust, Atmosphere and Plasma: Surface Instrumentation (LDAP-2012), is tentatively scheduled for 2012, to discuss new concepts for instrumentation to be deployed on the surface.

The organizers gratefully acknowledge support from NASA’s Lunar Science Institute, and both the Laboratory for Atmospheric and Space Physics (LASP) and the Center for Integrated Plasma Studies (CIPS) of the University of Colorado.