Map of the Artemis Regions from Moon Trek 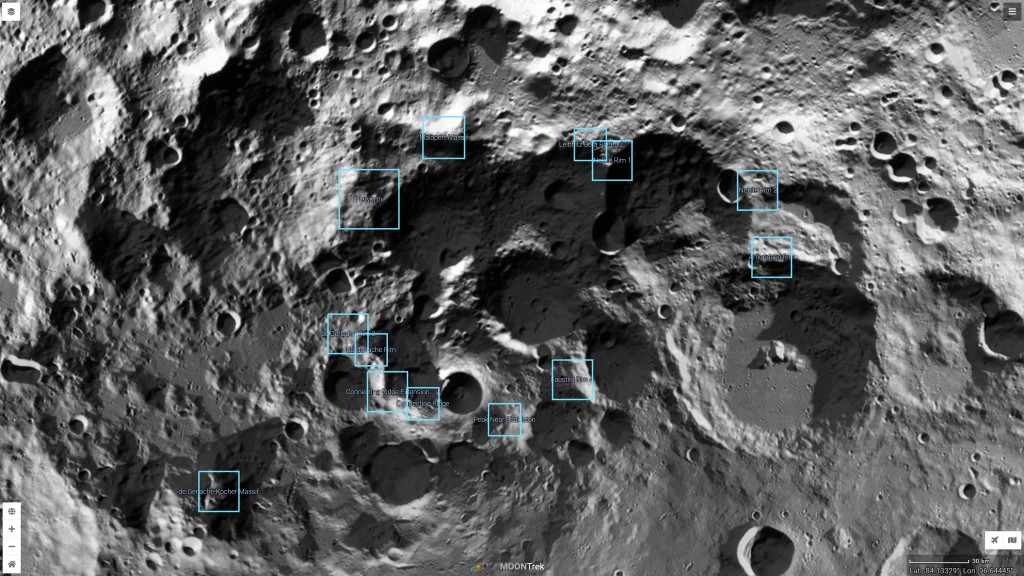 Map of the Artemis regions from Moon Trek

On August 19, 2022, NASA announced 13 candidate landing regions near the lunar South Pole as it continued preparations to send astronauts in a new generation of explorations of the Moon as part of the Artemis missions. Each region contains multiple potential landing sites for Artemis III, which will be the first of the Artemis missions to bring crew to the lunar surface, including the first woman to set foot on the Moon. Each of these regions is located within six degrees of latitude of the lunar South Pole.These areas were selected based upon a variety of factors including proximity to key geologic features (particularly permanently shadowed regions often found in near-polar craters), slope and smoothness of terrain enabling safe landing, lighting conditions, and windows for communication with Earth.

A new data layer in NASA’s Moon Trek data visualization and analysis portal allows the lunar science community and the general public to explore these regions in detail from Moon Trek’s South Polar Projection view or from the portal’s interactive 3D Globe view. The regions can be viewed in conjunction with a vast number of other data layers available in Moon Trek. In the Data menu (upper left), just search for and add the “Artemis III Candidate Landing Regions” layer.

Let’s take a close look at these locations using NASA’s Moon Trek portal. In doing so, we can begin to appreciate the astoundingly dramatic terrain that our astronauts will encounter. We see magnificent landscapes quite different from what our Apollo astronauts experienced. Ancient, rugged highland topography is accentuated by the deep, dark shadows of the high polar latitudes and the brightly reflective anorthosite-rich mineralogy of the terrain. We have come to understand that the incredibly frigid shadows that permanently drape the floors of many craters here can, in some cases, harbor accumulations of frozen volatiles including water ice. In stark contrast, soaring peaks reach high enough to encounter nearly constant sunlight. These are landscapes of irresistible scientific interest as well as stark, dramatic beauty. 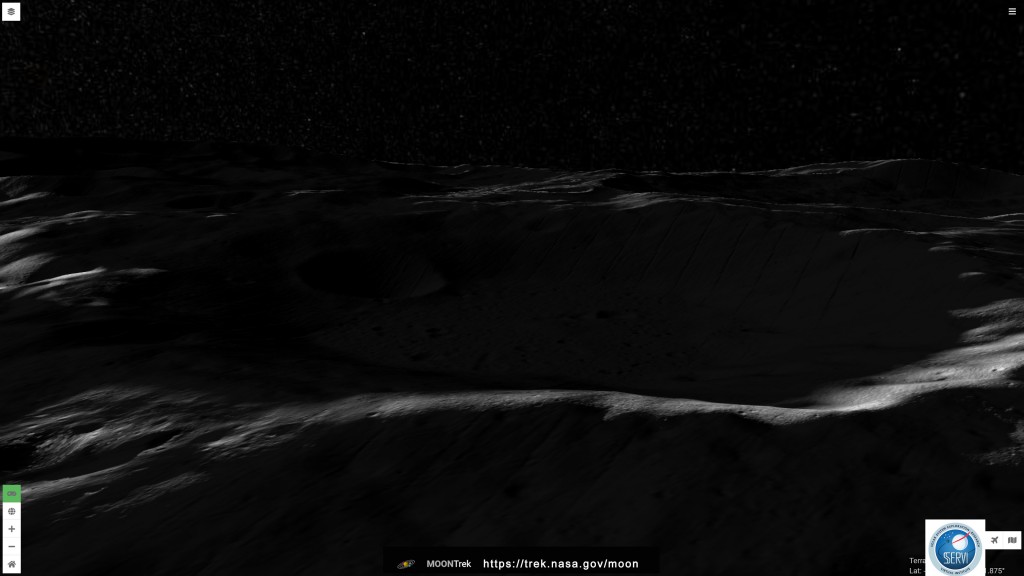 Cold, inky dark shadow within Faustini Crater dominates the center of this view. But the rim that has attracted the attention of the Artemis team appears bathed in sunlight here. Faustini measures 39 km (24 miles) across and about 3 km (1.7 miles) deep. The identified region is along the poleward rim of Faustini. 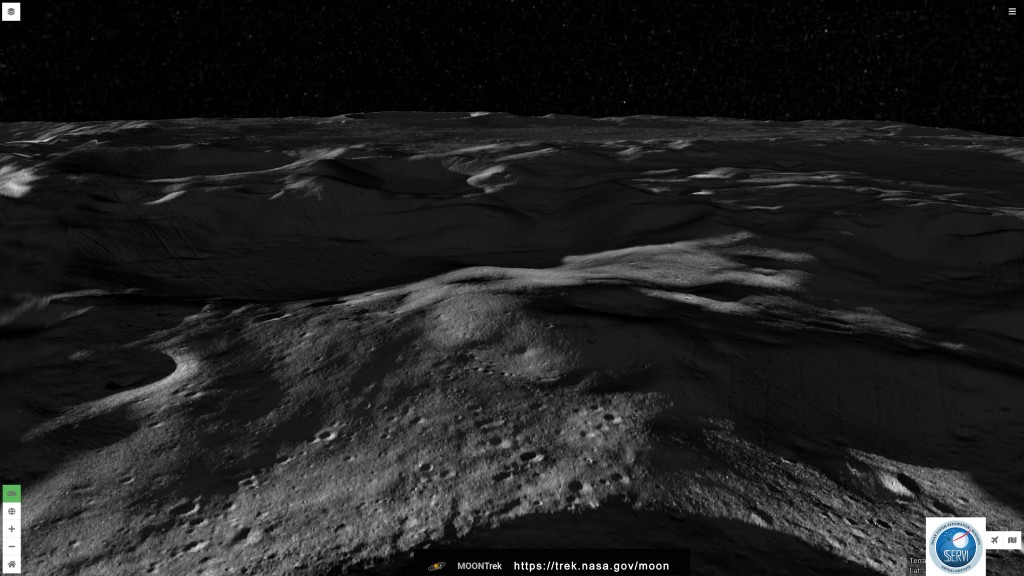 The edge of Shackleton Crater can be seen at the bottom of this view. Rising above Shackleton, this smooth, rounded mountain massif rises up approximately 1.5 km (0.9 miles) above the surrounding terrain, into the sunlight above Shackleton’s permanently shadowed interior. The lunar South Pole lies on the rim of Shackleton opposite to that which we see here. 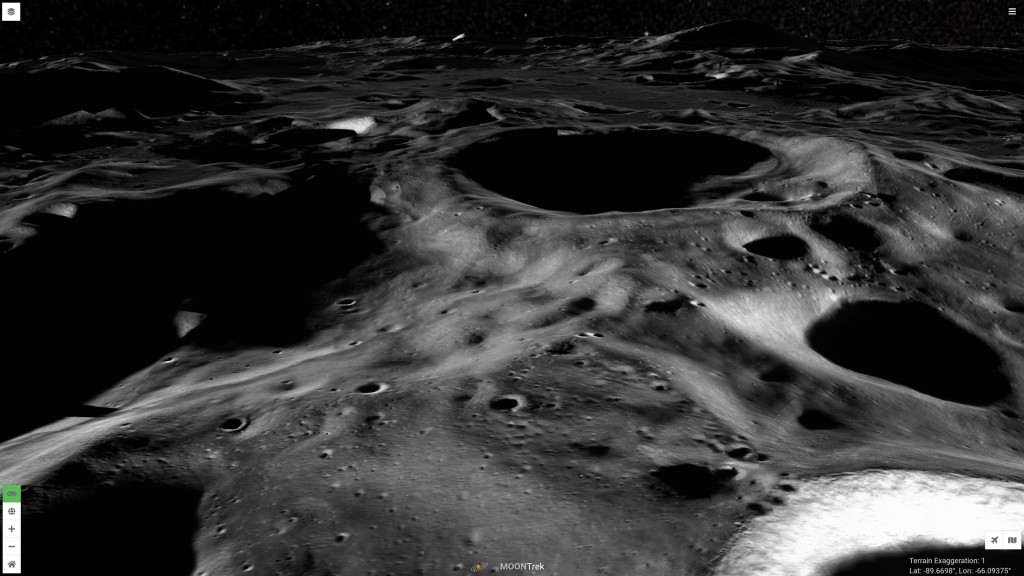 Here we pull back to see two of the Artemis Regions. The Shackleton-de-Gerlache Ridge rises up from the 11-o’clock position on Shackleton Crater, seen in the lower right. The extending ridge continues on toward the edge of de Gerlache Crater seen to the upper right of center. These ridges both provide smooth, level potential landing sites with access to numerous nearby permanently shadowed craters in close proximity to the lunar South Pole. 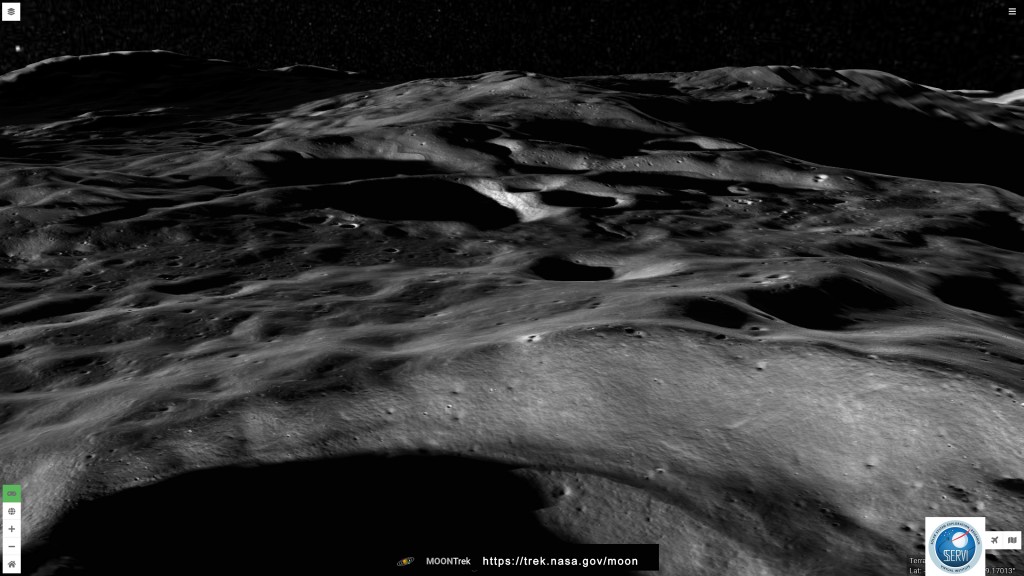 Two Artemis regions lie along this rim arching from left to right in this view. The rim of de Gerlache is well illuminated here, while a smaller crater within is draped in shadow. Measuring about 33 km (20 miles) across, de Gerlache is approximately 2 km (1.25 miles) deep. The regions of interest are along the rim closest to the Earth. 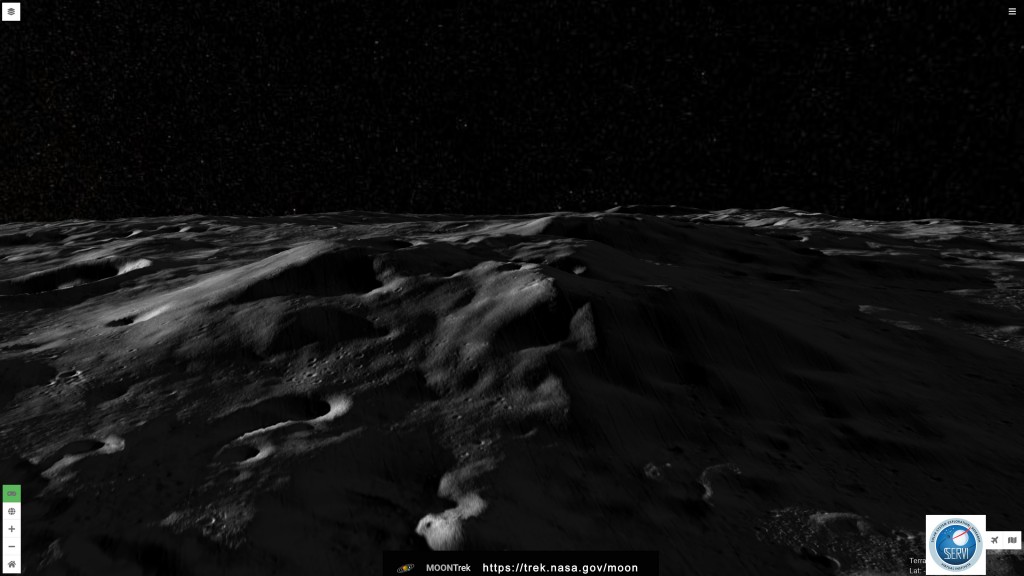 Located roughly between the craters de Gerlache and Kocher, this is the furthest into the lunar far side of any of the 13 Artemis III candidate regions. The fact that the broad, flat top of this great mountain rises over 5 km (3 miles) above the surrounding plains provides the region with opportunities for extended sunlight and line-of-sight communications with Earth. 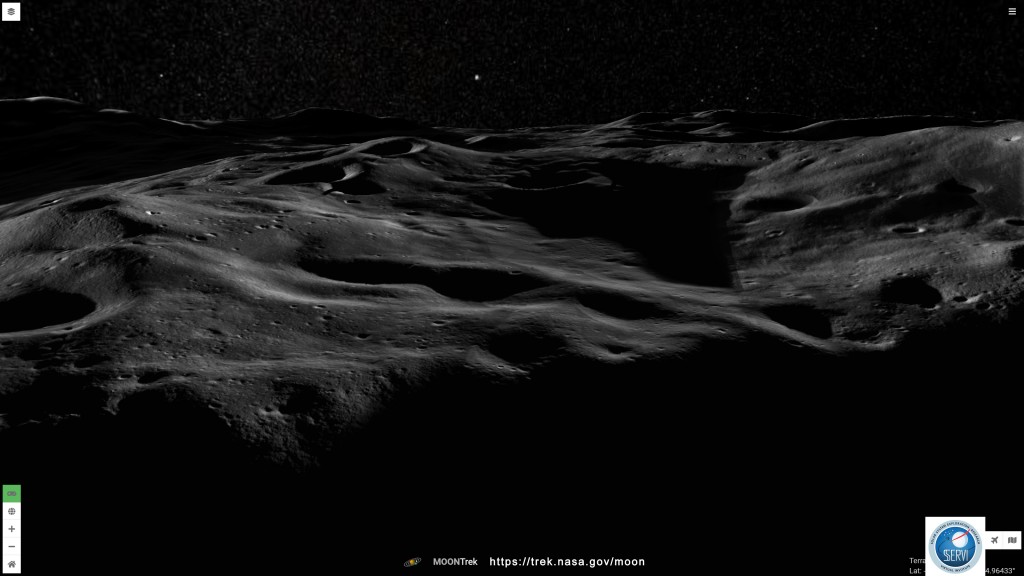 The dark, shadowed recesses of Haworth Crater dominate the lower portion of this view. Haworth measures 51 km (32 miles) across and 3 km (1.9 miles) deep. In general, the lunar south polar landscape is quite rugged, especially compared to the smooth mare surfaces explored by many of the Apollo missions. But the terrain extending out from Haworth toward the highlands west of Malapert Massif is relatively smooth and rolling in comparison to many surrounding areas. 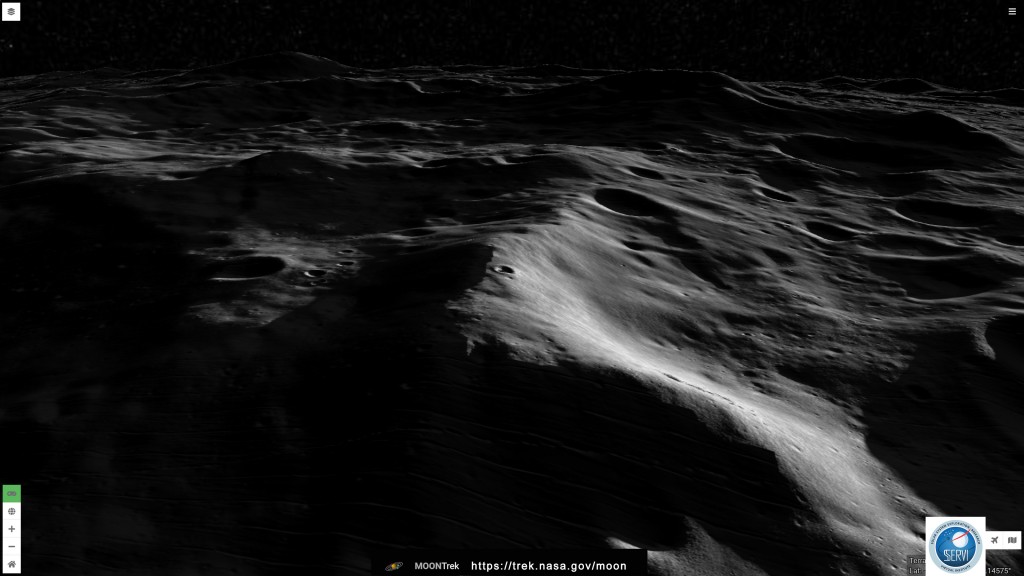 Rising high above the lunar south polar terrain, Malapert Massif has been described as a “Peak of Eternal Light”. That is a bit of an exaggeration. No point on the Moon receives perpetual light during both the winter and summer, but Malapert Massif does experience very extended periods of sunlight as well as good line-of-sight visibility with the Earth. These are both valuable strategic considerations in choosing sites for Artemis. Malapert Massif rises above Haworth Crater, with the mountain’s summit elevation being more than 8 km (5 miles) above Haworth’s floor. That is about equivalent to the height of Mt. Everest above sea level. 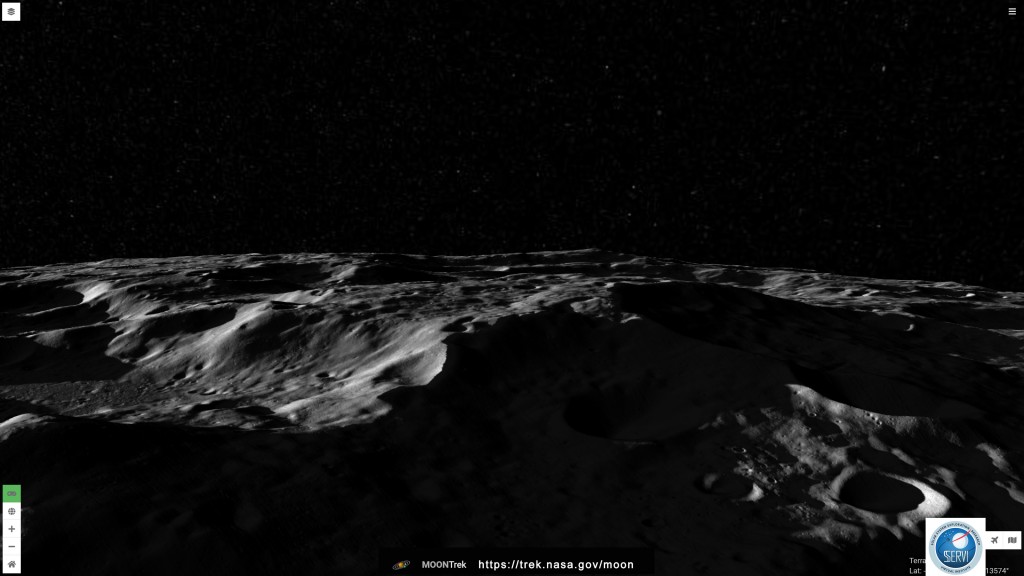 This great, flat-topped mountain has the highest-elevation summit reach of any topography in the south polar area. It is located next to Shoemaker crater, and the elevation change from the crater floor to the mountain’s summit is 10 km (6.2 mi), significantly higher than Mt. Everest here on Earth. This mountain has also been chosen as the site for NASA’s VIPER robotic rover mission to prospect for water ice. Leibnitz Beta is framed by two craters in this view. Nobile Crater tilts in shadow on the slope to the right. Malapert Crater is in sunlight to the left. 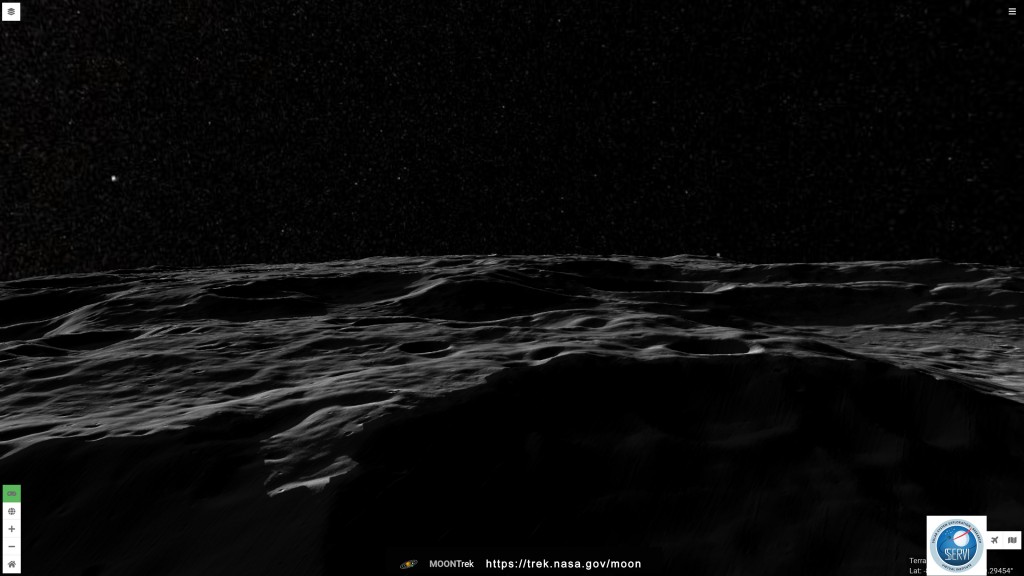 Nobile Crater has a diameter of about 73 km (45 miles) and lies on a steep slope on the side of Leibnitz Beta Massif. The upper rim of Nobile is actually more than 6 km (3.7 miles) higher than the downslope rim. In this view, seen from above the dark floor of Nobile, we look at the region of interest on the rim along the summit plateau of Leibnitz Beta. 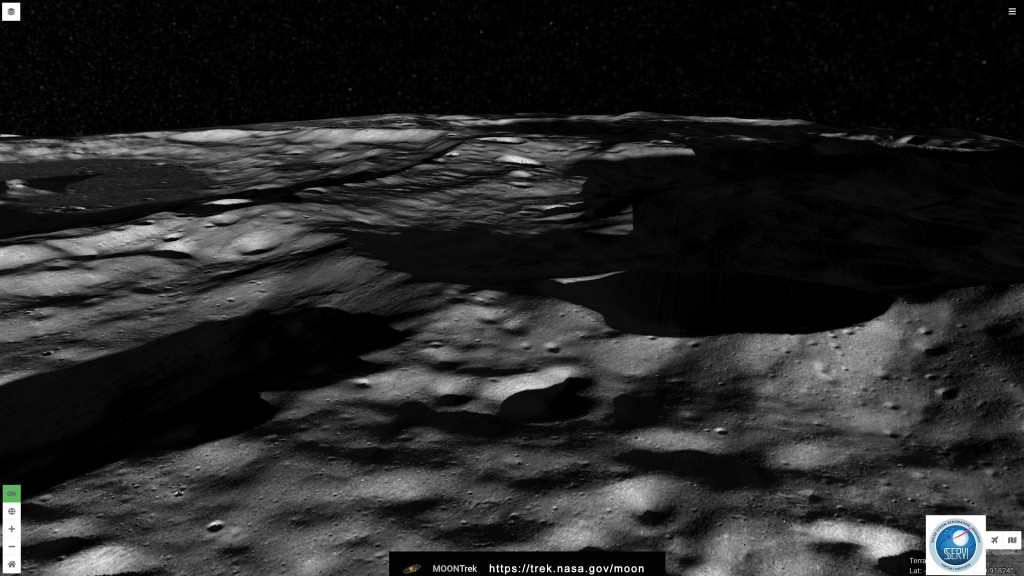 Another Artemis III candidate region lies near the downward rim of Nobile Crater. This view, as seen from above Wapowski Crater allows us to inspect the relatively smooth, rolling terrain of this region. 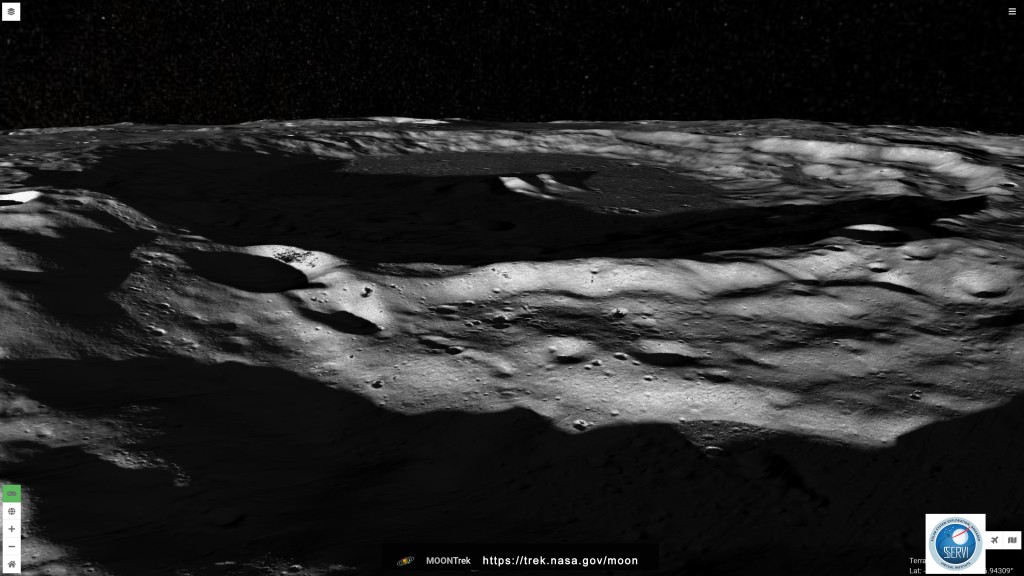 Amundsen Crater is a spectacular lunar south polar landmark. Measuring more than 100 km (62 miles) across and about 4 km (2.5 miles) deep, its central peaks rise about 1.25 km (0.8 miles) above the crater floor. The region of interest stretches out from the rim closest to the Earth.

A great deal of attention will continue to be focused upon these regions by NASA, its partners, and the lunar science community as the plans for the Artemis missions progress. Using Moon Trek, the public can join in the exploration of these fascinating lunar locations. The regions can be viewed in detail from Moon Trek’s South Polar Projection view or from the portal’s interactive 3D Globe view, and in conjunction with a vast number of other data layers available in Moon Trek. For a quick look, go to the Data menu (upper left), search for and add the “Artemis III Candidate Landing Regions” layer.