This movie begins with an animation (artist’s rendering) of NASA’s Mars Reconnaissance Orbiter spacecraft above Mars. The scene zooms into an “X-ray” view of the spacecraft, revealing the High Resolution Imaging Science Experiment (HiRISE) camera. The movie then transitions to a sequence of HiRISE images of the comet taken as it flew past Mars. The images were obtained by HiRISE between October 17 and 20, 2014. Credit: NASA/JPL-Caltech/University of Arizona

Two NASA and one European spacecraft that obtained the first up-close observations of a comet flyby of Mars on Oct. 19, have gathered new information about the basic properties of the comet’s nucleus and directly detected the effects on the Martian atmosphere.

Data from observations carried out by NASA’s Mars Atmosphere and Volatile Evolution (MAVEN) mission, NASA’s Mars Reconnaissance Orbiter (MRO), and a radar instrument on the European Space Agency’s (ESA’s) Mars Express spacecraft have revealed that debris from the comet added a temporary and very strong layer of ions to the ionosphere, the electrically charged layer high above Mars. In these observations, scientists were able to make a direct connection from the input of debris from a specific meteor shower to the formation of this kind of transient layer in response; that is a first on any planet, including Earth.

Comet C/2013 A1 Siding Spring traveled from the most distant region of our solar system, called the Oort Cloud, and made a close approach around 2:27 p.m. EDT within about 87,000 miles (139,500 kilometers) of the Red Planet. This is less than half the distance between Earth and our moon and less than one-tenth the distance of any known comet flyby of Earth. 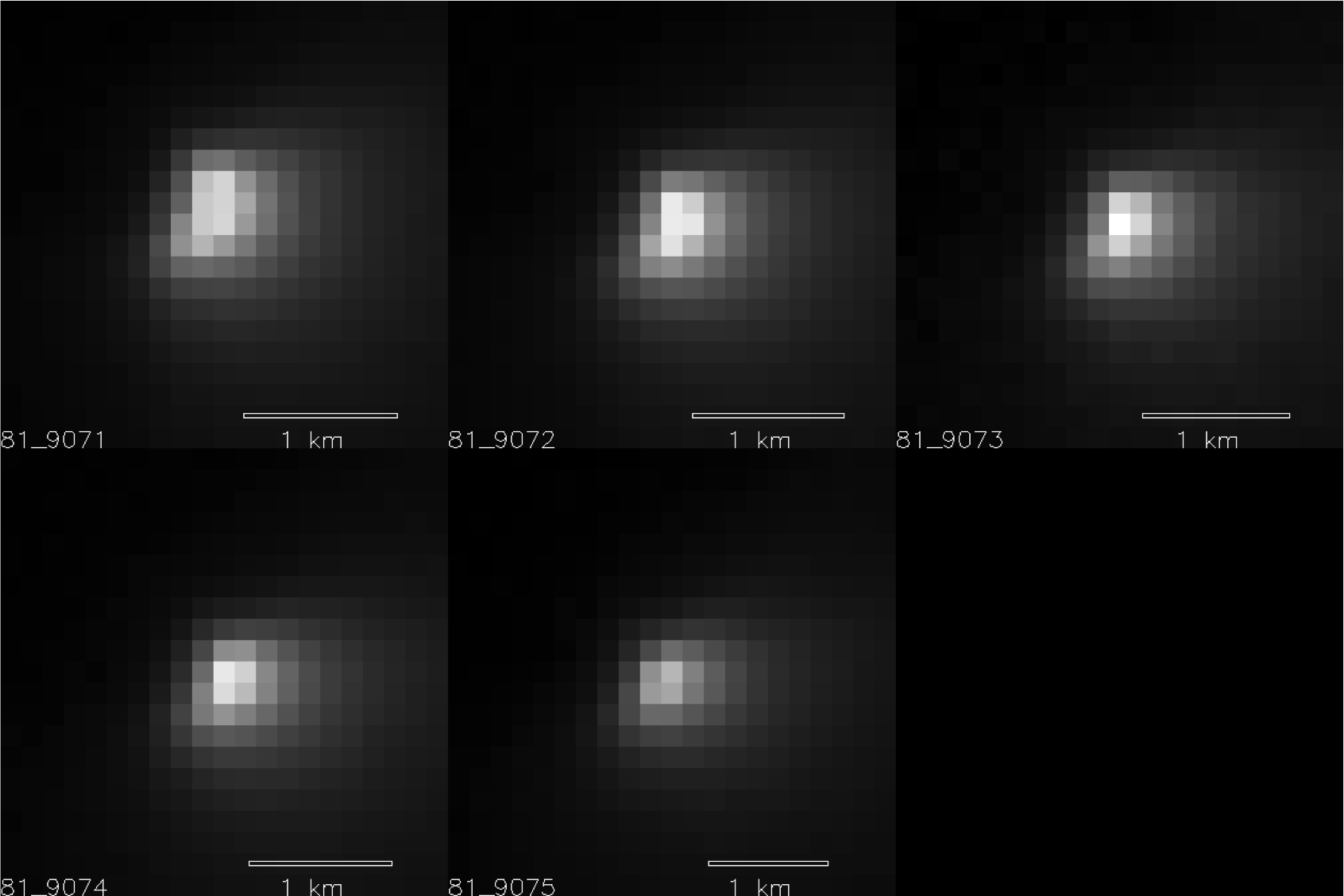 Five images of comet Siding Spring taken within a 35-minute period as it passed near Mars on Oct. 19, 2014, provide information about the size of the comet’s nucleus. The images were acquired by the High Resolution Imaging Science Experiment (HiRISE) camera on NASA’s Mars Reconnaissance Orbiter. Credit: NASA/JPL-Caltech/University of Arizona

Dust from the comet impacted Mars and was vaporized high in the atmosphere, producing what was likely an impressive meteor shower. This debris resulted in significant temporary changes to the planet’s upper atmosphere and possible longer-term perturbations. Earth-based and a host of space telescopes also observed the unique celestial object.

“This historic event allowed us to observe the details of this fast-moving Oort Cloud comet in a way never before possible using our existing Mars missions,” said Jim Green, director of NASA’s Planetary Science Division at the agency’s Headquarters in Washington. “Observing the effects on Mars of the comet’s dust slamming into the upper atmosphere makes me very happy that we decided to put our spacecraft on the other side of Mars at the peak of the dust tail passage and out of harm’s way.”

The MAVEN spacecraft, recently arrived at Mars, detected the comet encounter in two ways. The remote-sensing Imaging Ultraviolet Spectrograph observed intense ultraviolet emission from magnesium and iron ions high in the atmosphere in the aftermath of the meteor shower. Not even the most intense meteor storms on Earth have produced as strong a response as this one. The emission dominated Mars’ ultraviolet spectrum for several hours after the encounter and then dissipated over the next two days.

MAVEN also was able to directly sample and determine the composition of some of the comet dust in Mars’ atmosphere. Analysis of these samples by the spacecraft’s Neutral Gas and Ion Mass Spectrometer detected eight different types of metal ions, including sodium, magnesium and iron. These are the first direct measurements of the composition of dust from an Oort Cloud comet. The Oort Cloud, well beyond the outer-most planets that surround our sun, is a spherical region of icy objects believed to be material left over from the formation of the solar system.

Elsewhere above Mars, a joint U.S. and Italian instrument on Mars Express observed a huge increase in the density of electrons following the comet’s close approach. This instrument, the Mars Advanced Radar for Subsurface and Ionospheric Sounding (MARSIS), saw a huge jump in the electron density in the ionosphere a few hours after the comet rendezvous. This spike occurred at a substantially lower altitude than the normal density peak in the Martian ionosphere. The increased ionization, like the effects observed by MAVEN, appears to be the result of fine particles from the comet burning up in the atmosphere. 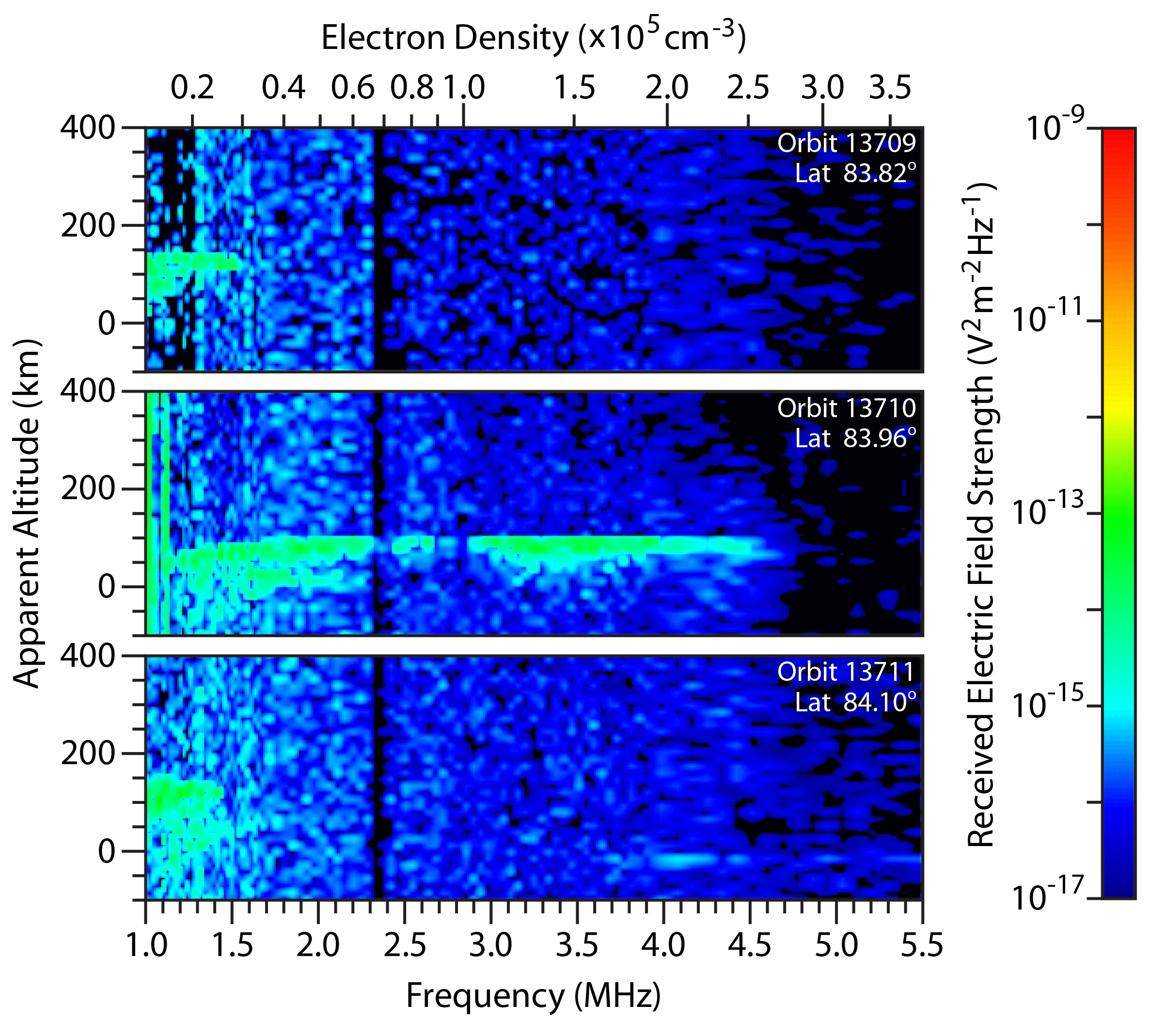 These spectrograms from the MARSIS instrument on the European Space Agency’s Mars Express orbiter show the intensity of radar echo in Mars’ far-northern ionosphere at three times on Oct. 19 and 20, 2014. The middle plot reveals effects attributed to dust from a comet that passed near Mars that day. Credit: ASI/NASA/ESA/JPL/Univ. of Rome/Univ. of Iowa

MRO’s Shallow Subsurface Radar (SHARAD) also detected the enhanced ionosphere. Images from the instrument were smeared by the passage of the radar signals through the temporary ion layer created by the comet’s dust. SHARAD scientists used this smearing to determine that the electron density of the ionosphere on the planet’s night side, where the observations were made, was five to 10 times higher than usual.

Studies of the comet itself, made with MRO’s High Resolution Imaging Science Experiment (HiRISE) camera, revealed the nucleus is smaller than the expected 1.2 miles (2 kilometers). The HiRISE images also indicate a rotation period for the nucleus of eight hours, which is consistent with recent preliminary observations by NASA’s Hubble Space Telescope.

MRO’s Compact Reconnaissance Imaging Spectrometer for Mars (CRISM) also observed the comet to see whether signs of any particular chemical constituents stood out in its spectrum. Team members said the spectrum appears to show a dusty comet with no strong emission lines at their instrument’s sensitivity.

In addition to these immediate effects, MAVEN and the other missions will continue to look for long-term perturbations to Mars’ atmosphere.

MAVEN’s principal investigator is based at the University of Colorado’s Laboratory for Atmospheric and Space Physics in Boulder, and NASA’s Goddard Space Flight Center in Greenbelt, Maryland, manages the mission. NASA’s Jet Propulsion Laboratory, a division of Caltech in Pasadena, manages the Mars Reconnaissance Orbiter. Mars Express is a project of the European Space Agency; NASA and the Italian Space Agency jointly funded the MARSIS instrument.

For more info, check out these Media teleconference visuals