New high-resolution impact simulations by researchers at the Southwest Research Institute and University of Maryland, as part of multiple teams funded by NASA’s Solar System Exploration Research Virtual Institute and a NASA Exobiology grant, showed that substantial portions of a large planetesimal’s core could penetrate all the way down to merge with Earth’s core—-or ricochet back into space and escape the planet entirely. Both outcomes reduce the apparent total mass added to Earth’s mantle, which implies the amount of material delivered to Earth may have been 2-5 times greater than previously thought. The findings were recently published in Nature Geoscience in the manuscript “Heterogeneous delivery of silicate and metal to the Earth by large planetesimals.”

Scientists have long believed that after the Moon’s formation, the early Earth experienced a long period of bombardment that waned about 3.9-3.7 billion years ago. During this period, called the “late accretion,” collisions with Moon-sized planetary bodies, known as planetesimals, embedded a substantial amount of metal and silicates into the Earth’s mantle and crust. These impacts were so numerous and massive that researchers estimate approximately 0.5% of Earth’s present mass was delivered during this stage of planetary evolution. If all this mass was spread over the surface, it would result in a global layer 10-20 km thick!

Evidence for continued accretion onto the Earth after the Moon’s formation is found in the concentrations of certain trace elements in its mantle (e.g., platinum, iridium, and gold), which have strong chemical affinities for metallic iron. The mantle abundances of these so-called highly siderophile elements are much higher than would normally result during core formation, and can be most easily explained by late accretion after core formation was complete.

“We find that metal and highly siderophile elements in large projectiles were not homogeneously delivered to the mantle and crust of the Earth, where we observe it. This requires that the early Earth was hit by planetesimals more persistently than previously thought,” said the paper’s first author Simone Marchi. “All these impacts have altered our planet in a profound way, and deposited elements that are so familiar to us, such as gold.” 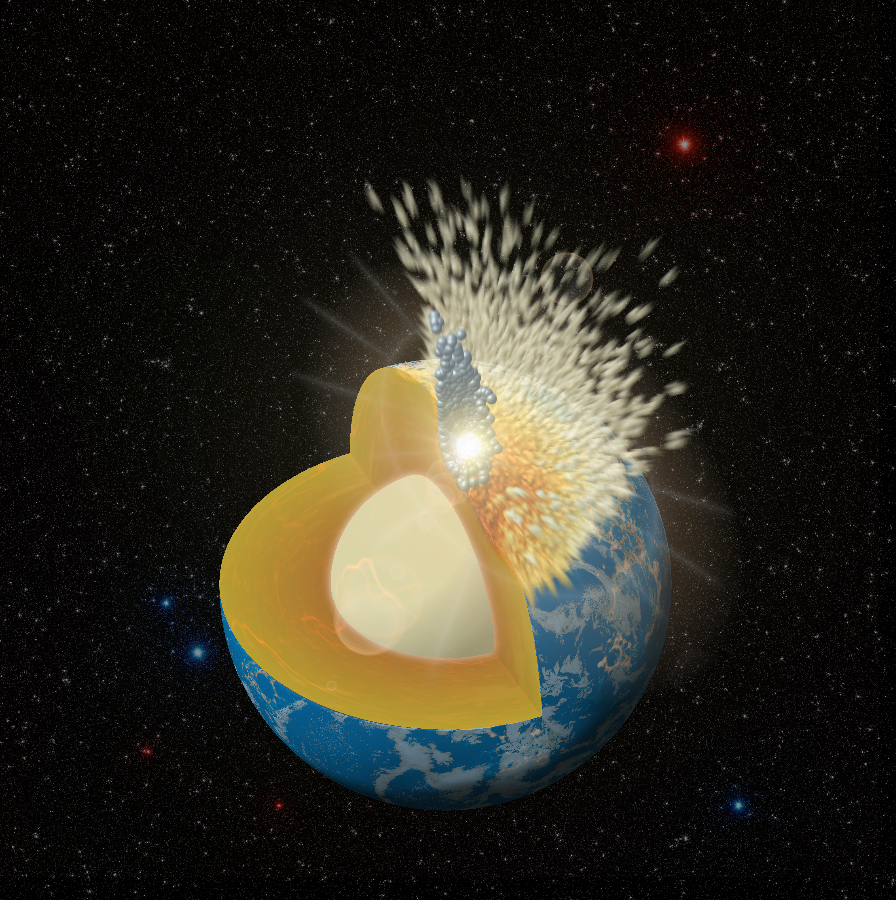 Figure 2. This animation shows a collision between a projectile of 3000 km in diameter with the early Earth, at a speed of 19 km/s. Right: Interaction of projectile and terrestrial materials. Green indicates silicate particles (from the mantle of the Earth and projectile), white indicates metallic particles from the projectile’s core. Light brown indicates particles from the Earth’s core. Left: Same as before, but now particle color coding reflects the temperature. Credit: S. Marchi/SwRI

Furthermore, the researchers demonstrated that some puzzling isotopic anomalies observed in terrestrial rocks can be explained as products of collisions following the Moon’s formation. Some of the oldest terrestrial rocks found in Greenland and South Africa exhibit tungsten (W) signatures that are remarkably different than average, mantle rocks. An example of this anomalous behavior is provided by an ancient type of lava, known as komatiites from the location in South Africa where it was first discovered (Fig. 3). 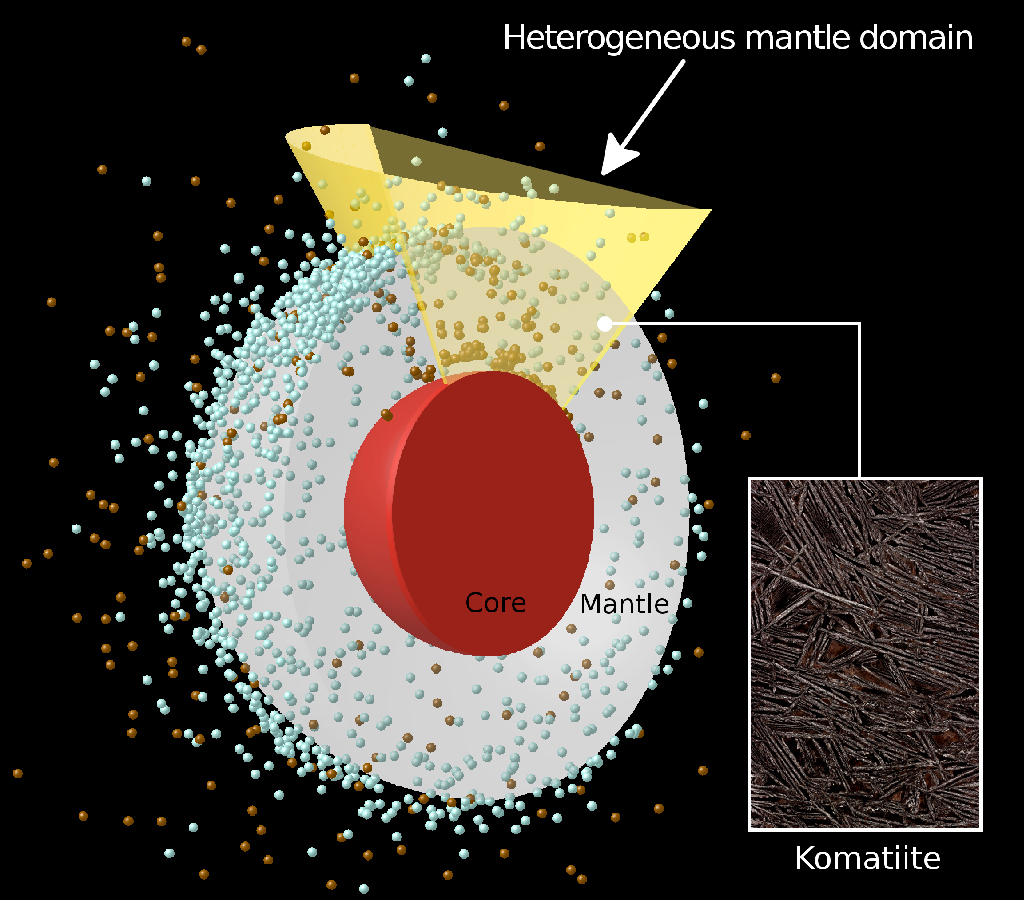 Figure 3: Formation of an impact-induced Earth’s mantle heterogeneity. The figure shows the location of the projectile’s core (dark brown) and mantle (green) particles. Earth’s particles are not shown for clarity, and the red and grey half-spheres indicate the Earth’s core and surface, respectively. The yellow cone defines a region, or domain, of high concentration of projectile’s core material. The inset shows an image of a komatiite (credit: Department of Earth & Atmospheric Sciences, University of Alberta), a mantle-derived volcanic rock, with the characteristic olivine spinifex pattern due fast cooling at the surface. These kind of rocks could be used to probe projectile enriched mantle domains that formed early in Earth’s history. Credit: S. Marchi/SwRI

“The origin of these characteristic W anomalies is matter of debate. In our work, we propose they could be the result of heterogeneous mixing of a projectile’s core material,” added co-author Richard Walker.

The process of heterogeneous projectile mixing may also have broad implications for the origin of the Moon. Previously it was thought that the isotopic anomalies observed in some ancient terrestrial rocks were produced by processes that occurred before the Moon-forming giant impact. Preservation of such anomalies then required that the Earth’s mantle was not well-mixed during the giant impact, a problematic constraint for some lunar origin models.

“We propose that at least some observed isotopic anomalies in ancient terrestrial samples may have been produced after the Moon-forming impact, during late accretion, when projectiles were smaller and limited mixing was perhaps more probable,” said co-author Robin Canup.

A close up view of the impactor (brown = core, green = mantle) and how a large chunk of the core survives the collision. The particles of the Earth are not shown for clarity, only the grey and red half spheres indicate the mantle and core. In this simulation the impactor is 1500 km in diameter, impact speed is 19 km/s, impact angle is 45 degree. Credit: S. Marchi/SwRI

NASA’s Solar System Exploration Research Virtual Institute (SSERVI) is based and managed at Ames Research Center in California’s Silicon Valley. SSERVI is a virtual institute that, together with international partnerships, brings science and exploration researchers together in a collaborative virtual setting. SSERVI is funded by the Science Mission Directorate and Human