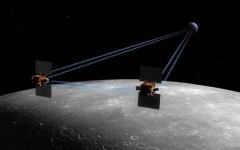 NASA will host a two-day launch Tweetup for 150 of its Twitter followers on Sept. 7-8 at the agency’s Kennedy Space Center in Florida. The Tweetup is expected to culminate in the launch of the twin lunar-bound GRAIL spacecraft aboard a Delta II rocket from Cape Canaveral Air Force Station in Florida.

The launch window opens at 8:37 a.m. EDT on Sept. 8. The two GRAIL spacecraft will fly in tandem orbits around the moon for several months to measure its gravity field, from its crust to core, in unprecedented detail. The mission also will answer longstanding questions about the moon and provide scientists with a better understanding of how Earth and other rocky planets in the solar system formed.

The Tweetup will provide NASA’s Twitter followers with the opportunity to tour the Kennedy Space Center Visitor Complex; speak with scientists and engineers from GRAIL and other upcoming missions; and, if all goes as scheduled, view the spacecraft launch. The event also will provide participants the opportunity to meet fellow tweeps and members of NASA’s social media team.

2011 is one of the busiest ever in planetary exploration; GRAIL’s lift off is the third of four space missions launching this year under the management of NASA’s Jet Propulsion Laboratory in Pasadena, Calif. Aquarius launched June 10 to study ocean salinity; Juno will launch Aug. 5 to study the origins and interior of Jupiter; and the Mars Science Laboratory/Curiosity rover heads to the Red Planet no earlier than Nov. 25.

Tweetup registration opens at 9 a.m. on Tuesday, July 26, and closes at noon on Thursday, July 28. NASA will randomly select 150 participants from online registrations.

For more information and rules about the Tweetup and registration, visit:

For information about more ways to connect and collaborate with NASA, visit: