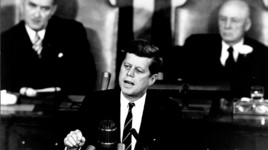 Fifty years ago, a young president struggling with deepening international issues set a fledgling space agency on a course that would change the history of human exploration. NASA commemorates President John F. Kennedy’s historic speech that sent humans safely to the moon with a series of activities and a commitment to continue the journey of discovery and exploration that started with a desperate race into space.

“We are moving into a bright new future that builds on a challenge presented to us 50 years ago,” said NASA Administrator Charles Bolden. “It is important that we remember our history but we must always look forward toward a brighter future. Our advantage now is that we have five decades of accomplishment and world leadership in space on which to build. The dreams President Kennedy helped make real for our world, and the dreams we still hold, may appear to be just out of reach but they are not out of our grasp.”

On this date in 1961, Kennedy addressed a joint session of Congress, with a worldwide television audience, and announced, “I believe that this nation should commit itself to achieving the goal, before this decade is out, of landing a man on the moon and returning him safely to Earth.” This was seen as a bold mandate because America’s experience up to this point was Alan Shepard’s suborbital Freedom 7 mission, which launched just a few weeks earlier and lasted about 15 minutes.

“Today, we have another young and vibrant president who has outlined an urgent national need to out-innovate, out-educate, and out-build our competitors and create new capabilities that will take us farther into the solar system, and help us learn even more about our place in the universe,” Bolden added. “We stand at a moonshot moment once again, where we have a chance to make great leaps forward to new destinations, develop new vehicles and technologies, and new ways of exploring.”

To commemorate the address that launched NASA into history, the agency has scheduled several events and historic multimedia perspectives, including:

— A special concert at 7 p.m. EDT tonight at the John F. Kennedy Center for the Performing Arts in Washington. The one-hour concert will feature the Space Philharmonic, Administrator Bolden, astronauts, Kennedy family representatives and special guests. There are a limited number of tickets available for the public. For more information, visit: https://go.nasa.gov/jTOKZt
— Video and other multimedia material from President Kennedy’s speech are available on NASA Television and on the agency’s Internet homepage https://www.nasa.gov along with information about the agency’s future exploration initiatives.
— A message from the administrator about NASA’s next moonshot moment and moving beyond Earth orbit is available on his blog at: https://bit.ly/fNjTS2
— An announcement later today that represents an important step in executing the president’s exploration objectives and could pave the way for extending humanity’s reach beyond low-Earth orbit and further into space
— NASA and the Smithsonian’s National Air and Space Museum in Washington present “NASA | ART,” from May 28 to Oct. 9. The exhibit features more than 70 paintings, drawings, photographs, sculptures, and other forms of art illustrating the agency’s mission. Admission is free, and the exhibit is located at the Air and Space Museum’s building at Sixth Street and Independence Ave. SW.

For more information about NASA and its missions, connect with the agency online at: