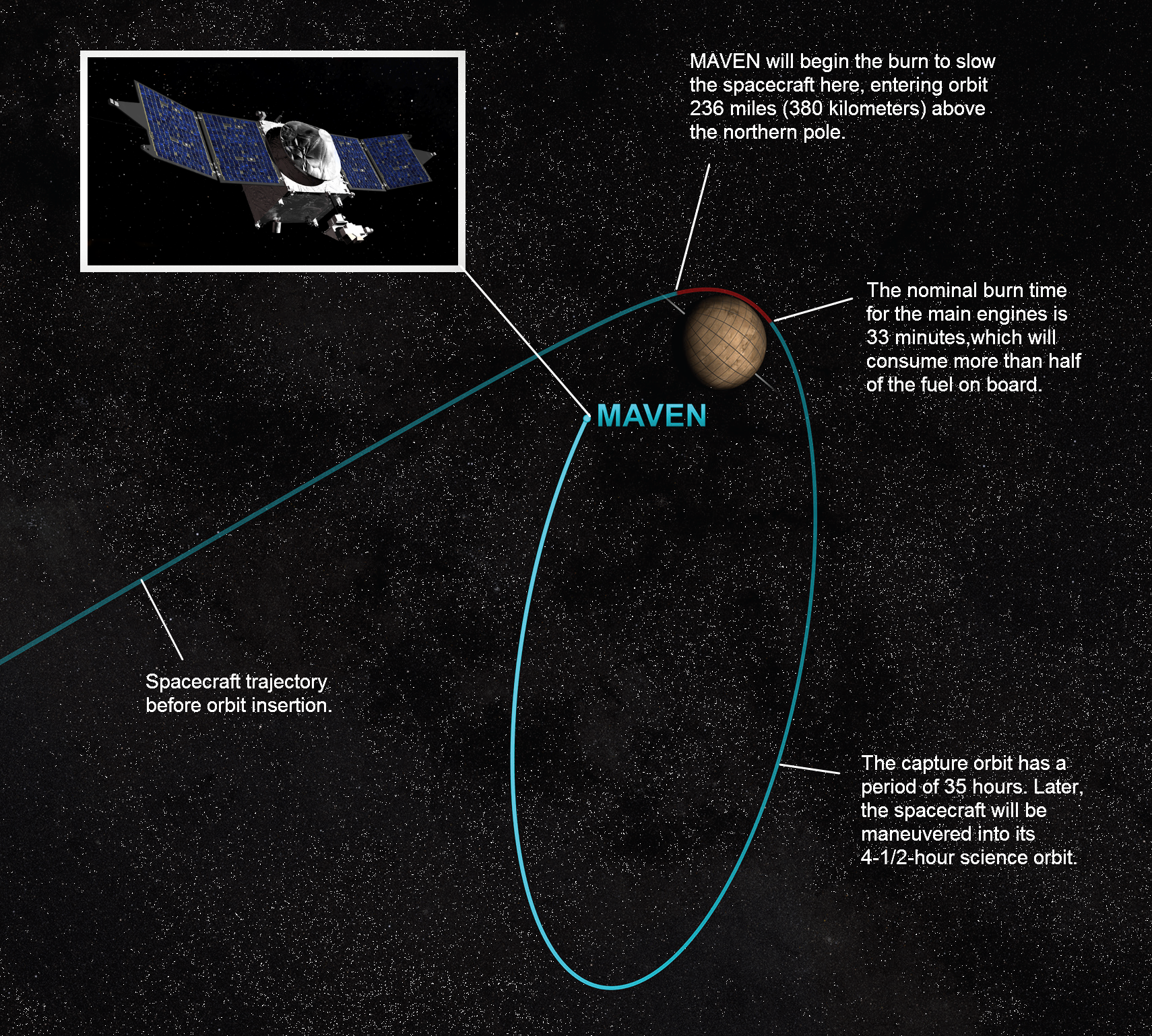 Flight Controllers at Lockheed Martin Space Systems in Littleton, Colorado, will be responsible for the health and safety of the spacecraft throughout the process. The spacecraft’s mission timeline will place the spacecraft in orbit at approximately 9:50 p.m. EDT.

“So far, so good with the performance of the spacecraft and payloads on the cruise to Mars,” said David Mitchell, MAVEN project manager at NASA’s Goddard Space Flight Center in Greenbelt, Maryland. “The team, the flight system, and all ground assets are ready for Mars orbit insertion.”

The orbit-insertion maneuver will begin with the brief firing of six small thruster engines to steady the spacecraft. The engines will ignite and burn for 33 minutes to slow the craft, allowing it to be pulled into an elliptical orbit with a period of 35 hours.

Following orbit insertion, MAVEN will begin a six-week commissioning phase that includes maneuvering the spacecraft into its final orbit and testing its instruments and science-mapping commands. Thereafter, MAVEN will begin its one-Earth-year primary mission to take measurements of the composition, structure and escape of gases in Mars’ upper atmosphere and its interaction with the sun and solar wind.

“The MAVEN science mission focuses on answering questions about where did the water that was present on early Mars go, about where did the carbon dioxide go,” said Bruce Jakosky, MAVEN principal investigator from the University of Colorado, Boulder’s Laboratory for Atmospheric and Space Physics. “These are important questions for understanding the history of Mars, its climate, and its potential to support at least microbial life.”

MAVEN launched Nov. 18, 2013, from Cape Canaveral, Florida, carrying three instrument packages. It is the first spacecraft dedicated to exploring the upper atmosphere of Mars. The mission’s combination of detailed measurements at specific points in Mars’ atmosphere and global imaging provides a powerful tool for understanding the properties of the Red Planet’s upper atmosphere.

“MAVEN is another NASA robotic scientific explorer that is paving the way for our journey to Mars,” said Jim Green, director of the Planetary Science Division at NASA Headquarters in Washington. “Together, robotics and humans will pioneer the Red Planet and the solar system to help answer some of humanity’s fundamental questions about life beyond Earth.”

The spacecraft’s principal investigator is based at the Laboratory for Atmospheric and Space Physics at University of Colorado, Boulder. The university provided two science instruments and leads science operations, as well as education and public outreach, for the mission.

To learn more about the MAVEN mission, visit: