The KPLO spacecraft will carry a total of five instruments to lunar orbit—four from South Korea and one from NASA (developed by Arizona State University and Malin Space Science Systems). Credit: Korea Aerospace Research Institute (KARI)

KARI, headquartered in Daejeon, South Korea, provided NASA with about 33 pounds (15 kilograms) of payload mass aboard the KPLO, which is scheduled to launch into lunar orbit in December 2018. In September 2016, NASA issued a solicitation seeking science instruments that could increase our understanding of the distribution of volatiles, such as water, including the movement of such resources toward permanently shadowed regions and how they become trapped there. 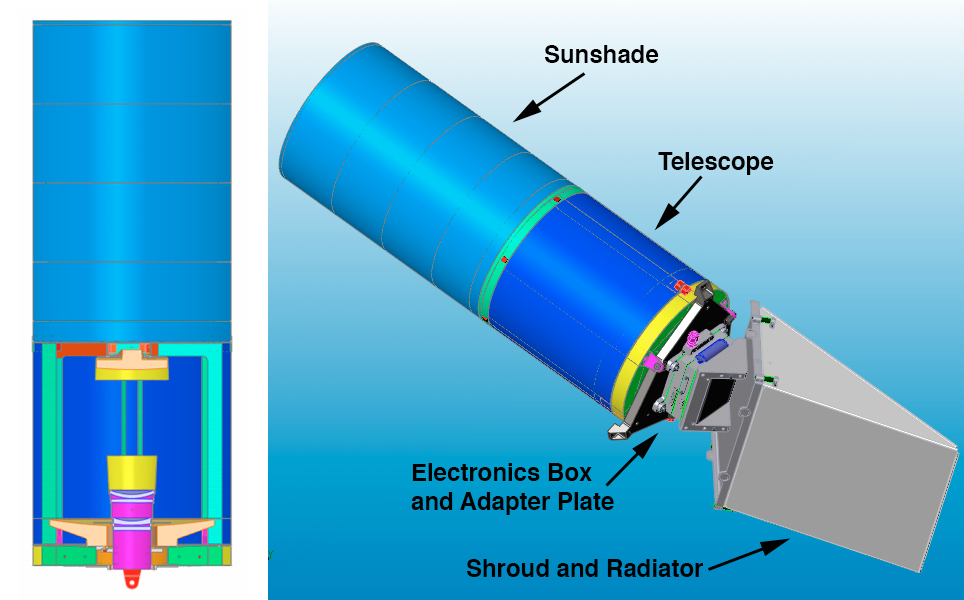 “Permanently shadowed regions have been a mystery because the perpetually dark interiors are difficult to image and existing research offers varying interpretations regarding the distribution of volatiles within these cold regions,” says Jason Crusan, Director of NASA’s Advanced Exploration Systems Division at NASA Headquarters in Washington, D.C. “Future missions in deep space will be safer and more affordable if we have the capability to harvest lunar resources, and ShadowCam has the potential to greatly increase our understanding of the quality and abundance of those resources in these regions.”

​ShadowCam will map the reflectance within the permanently shadowed regions to search for evidence of frost or ice deposits. The instrument’s optical camera is based on the Lunar Reconnaissance Orbiter Narrow Angle Camera, but is 800 times more sensitive, allowing it to obtain high-resolution, high signal-to-noise imaging of the moon’s permanently shadowed regions. ShadowCam will observe the PSRs monthly to detect seasonal changes and measure the terrain inside the craters, including the distribution of boulders.

“We are pleased with the addition of NASA’s ShadowCam instrument,” says Dr. Seok Weon Choi, Director of the Lunar Exploration Program Office at KARI. “KPLO is an exciting mission and will reveal much about the moon for us and our spacefaring partners.”