NASA has selected two missions that have the potential to open new windows on one of the earliest eras in the history of our solar system – a time less than 10 million years after the birth of our sun. The missions, known as Lucy and Psyche, were chosen from five finalists and will proceed to mission formulation, with the goal of launching in 2021 and 2023, respectively.

The Lucy Mission
NASA has selected a mission that will perform the first reconnaissance of the Trojans, a population of primitive asteroids orbiting in tandem with Jupiter. The Lucy mission will launch in 2021 to study six of these exciting worlds. 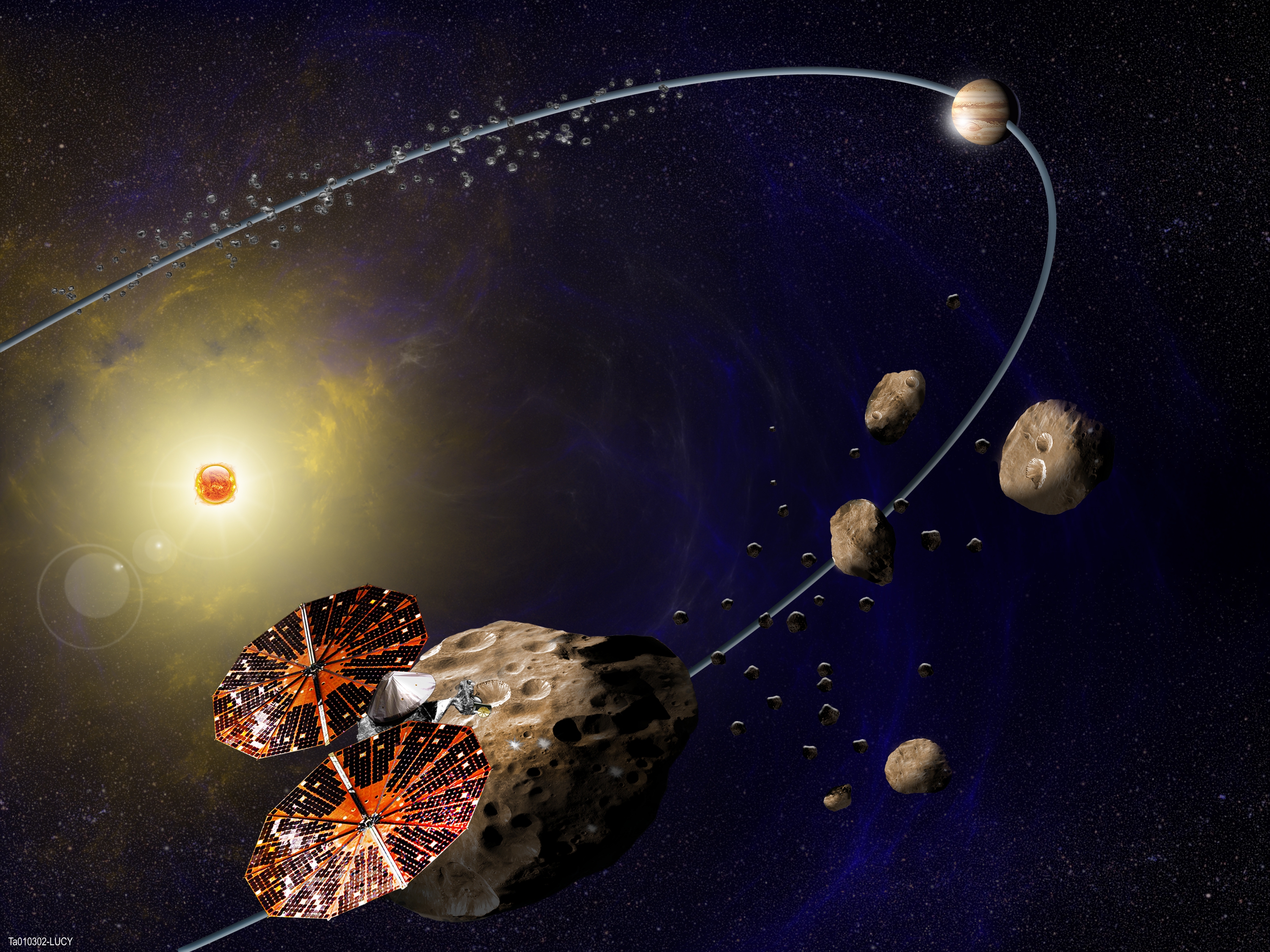 NASA’s Lucy mission, which will launch in 2021 for the first reconnaissance of the Trojans, a population of primitive asteroids orbiting in tandem with Jupiter. In this artist’s concept (not to scale), the Lucy spacecraft is flying by Eurybates, one of the six diverse and scientifically important Trojans to be studied. Credit: Southwest Research Institute

“This is a unique opportunity,” said Dr. Harold F. Levison, Lucy principal investigator and SSERVI Co-Investigator from Southwest Research Institute (SwRI) in Boulder, Colorado. “Because the Trojans are remnants of the primordial material that formed the outer planets, they hold vital clues to deciphering the history of the solar system. Lucy, like the human fossil for which it is named, will revolutionize the understanding of our origins.”

The Lucy spacecraft and a remote-sensing instrument suite will study the geology, surface composition, and bulk physical properties of these bodies at close range. The payload includes three complementary imaging and mapping instruments, including a color imaging and infrared mapping spectrometer from NASA’s Goddard Space Flight Center in Greenbelt, Maryland, a high-resolution visible imager from the Johns Hopkins University Applied Physics Laboratory, Laurel, Maryland, and a thermal infrared spectrometer from Arizona State University, Tempe. In addition, Lucy will perform radio science investigations using its telecommunications system to determine the masses and densities of the Trojan targets.

“Understanding the causes of the differences between the Trojans will provide unique and critical knowledge of planetary origins, the source of volatiles and organics on the terrestrial planets, and the evolution of the planetary system as a whole,” said Dr. Catherine Olkin, the mission’s deputy principal investigator from SwRI.

“The Lucy mission is one of those rare moments where a single mission can have a major impact on our understanding of such fundamental questions,” added Dr. Keith Noll, Lucy project scientist from Goddard.

The mission will launch in October 2021 and fly by its targets between 2025 and 2033. In all, Lucy will study six Trojans and one main belt asteroid.

The Psyche Mission
The Psyche mission will explore one of the most intriguing targets in the main asteroid belt – a giant metal asteroid, known as 16 Psyche, about three times farther away from the sun than is the Earth. This asteroid measures about 130 miles (210 kilometers) in diameter and, unlike most other asteroids that are rocky or icy bodies, is thought to be comprised mostly of metallic iron and nickel, similar to Earth’s core. Scientists wonder whether Psyche could be an exposed core of an early planet that could have been as large as Mars, but which lost its rocky outer layers due to a number of violent collisions billions of years ago.

The mission will help scientists understand how planets and other bodies separated into their layers – including cores, mantles and crusts – early in their histories.

“This is an opportunity to explore a new type of world – not one of rock or ice, but of metal,” said Psyche Principal Investigator Lindy Elkins-Tanton of Arizona State University in Tempe. “16 Psyche is the only known object of its kind in the solar system, and this is the only way humans will ever visit a core. We learn about inner space by visiting outer space.”

Psyche, also a robotic mission, is targeted to launch in October of 2023, arriving at the asteroid in 2030, following an Earth gravity assist spacecraft maneuver in 2024 and a Mars flyby in 2025.

In addition to selecting the Lucy and Psyche missions for formulation, the agency will extend funding for the Near Earth Object Camera (NEOCam) project for an additional year. The NEOCam space telescope is designed to survey regions of space closest to Earth’s orbit, where potentially hazardous asteroids may be found.

“These are true missions of discovery that integrate into NASA’s larger strategy of investigating how the solar system formed and evolved,” said NASA’s Planetary Science Director Jim Green. “We’ve explored terrestrial planets, gas giants, and a range of other bodies orbiting the sun. Lucy will observe primitive remnants from farther out in the solar system, while Psyche will directly observe the interior of a planetary body. These additional pieces of the puzzle will help us understand how the sun and its family of planets formed, changed over time, and became places where life could develop and be sustained – and what the future may hold.”

Discovery Program class missions like these are relatively low-cost, their development capped at about $450 million. They are managed for NASA’s Planetary Science Division by the Planetary Missions Program Office at Marshall Space Flight Center in Huntsville, Alabama. The missions are designed and led by a principal investigator, who assembles a team of scientists and engineers, to address key science questions about the solar system.

The Discovery Program portfolio includes 12 prior selections such as the MESSENGER mission to study Mercury, the Dawn mission to explore asteroids Vesta and Ceres, and the InSight Mars lander, scheduled to launch in May 2018.

NASA’s other missions to asteroids began with the NEAR orbiter of asteroid Eros, which arrived in 2000, and continues with Dawn, which orbited Vesta and now is in an extended mission phase at Ceres. The OSIRIS-REx mission, which launched on Sept. 8, 2016, is speeding toward a 2018 rendezvous with the asteroid Bennu, and will deliver a sample back to Earth in 2023. Each mission focuses on a different aspect of asteroid science to give scientists the broader picture of solar system formation and evolution.

Read more about NASA’s Discovery Program and missions at: