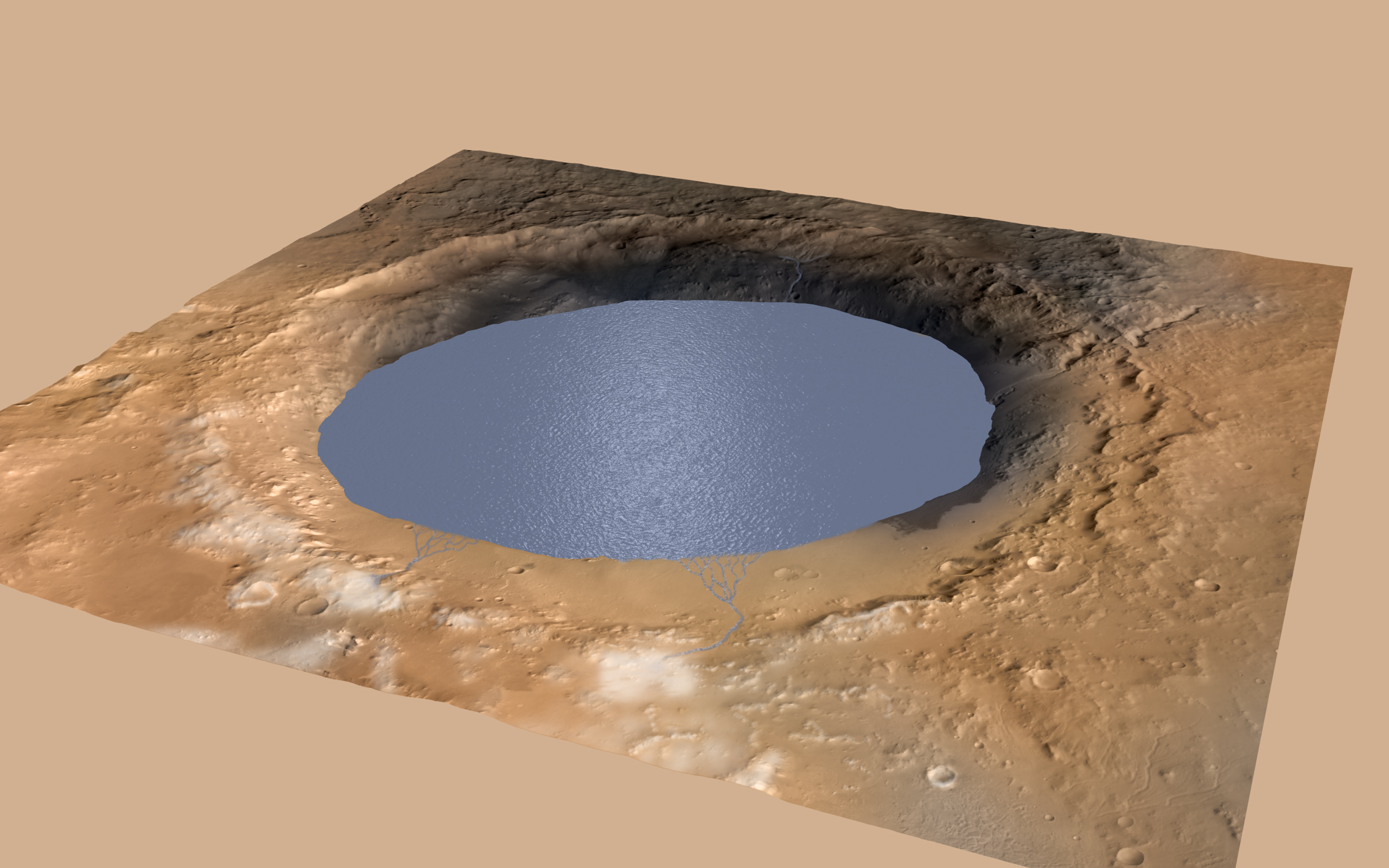 Observations by NASA’s Curiosity Rover indicate Mars’ Mount Sharp was built by sediments deposited in a large lake bed over tens of millions of years.

This interpretation of Curiosity’s finds in Gale Crater suggests ancient Mars maintained a climate that could have produced long-lasting lakes at many locations on the Red Planet.

“If our hypothesis for Mount Sharp holds up, it challenges the notion that warm and wet conditions were transient, local, or only underground on Mars,” said Ashwin Vasavada, Curiosity deputy project scientist at NASA’s Jet Propulsion Laboratory in Pasadena. “A more radical explanation is that Mars’ ancient, thicker atmosphere raised temperatures above freezing globally, but so far we don’t know how the atmosphere did that.”

Why this layered mountain sits in a crater has been a challenging question for researchers. Mount Sharp stands about 3 miles (5 kilometers) tall, its lower flanks exposing hundreds of rock layers. The rock layers – alternating between lake, river and wind deposits — bear witness to the repeated filling and evaporation of a Martian lake much larger and longer-lasting than any previously examined close-up.

“We are making headway in solving the mystery of Mount Sharp,” said Curiosity Project Scientist John Grotzinger of the California Institute of Technology in Pasadena, California. “Where there’s now a mountain, there may have once been a series of lakes.”

Curiosity currently is investigating the lowest sedimentary layers of Mount Sharp, a section of rock 500 feet (150 meters) high dubbed the Murray formation. Rivers carried sand and silt to the lake, depositing the sediments at the mouth of the river to form deltas similar to those found at river mouths on Earth. This cycle occurred over and over again. 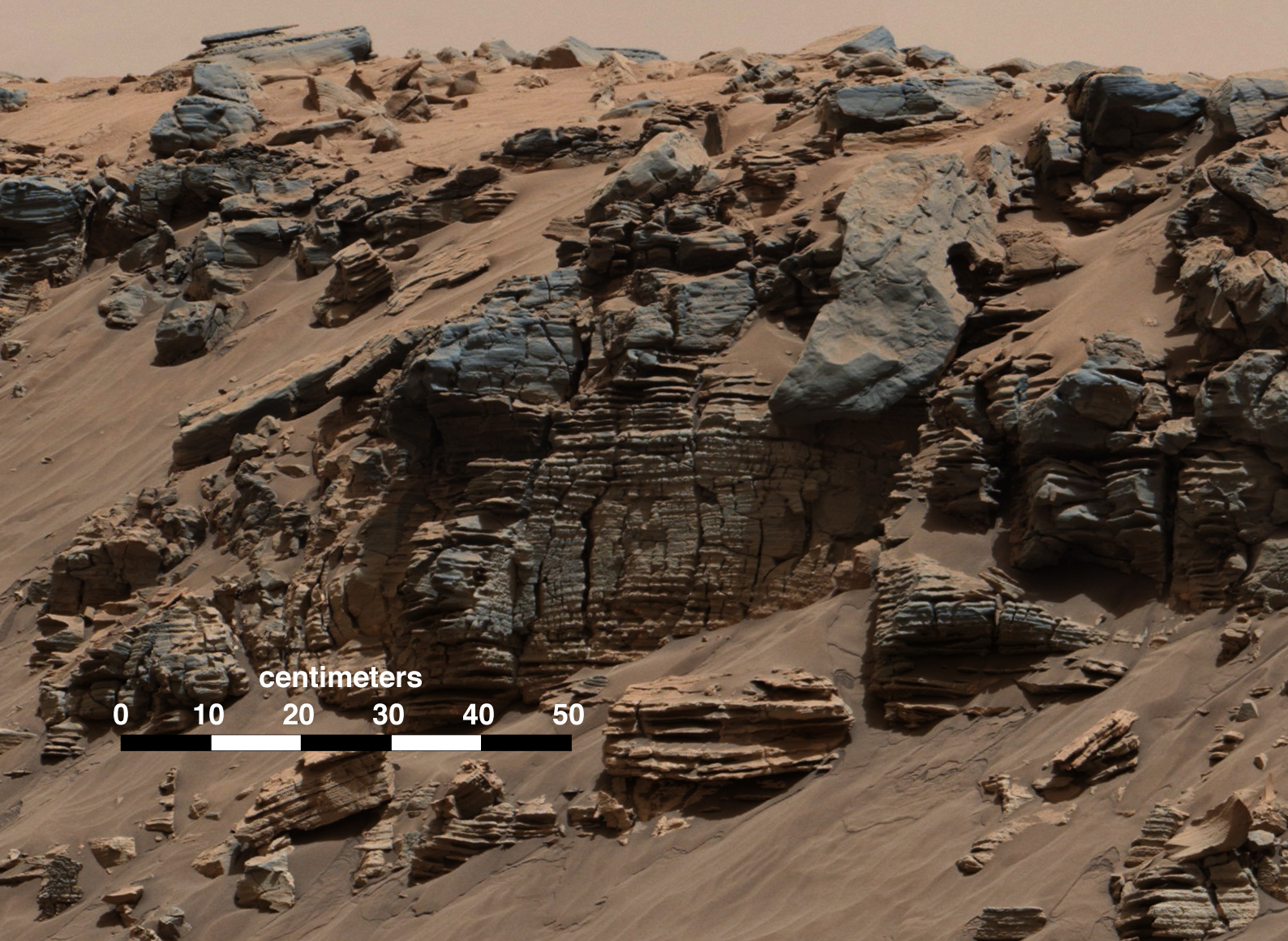 This evenly layered rock photographed by the Mast Camera (Mastcam) on NASA’s Curiosity Mars Rover on Aug. 7, 2014, shows a pattern typical of a lake-floor sedimentary deposit not far from where flowing water entered a lake. Credit: NASA/JPL-Caltech/MSSS

“The great thing about a lake that occurs repeatedly, over and over, is that each time it comes back it is another experiment to tell you how the environment works,” Grotzinger said. “As Curiosity climbs higher on Mount Sharp, we will have a series of experiments to show patterns in how the atmosphere and the water and the sediments interact. We may see how the chemistry changed in the lakes over time. This is a hypothesis supported by what we have observed so far, providing a framework for testing in the coming year.”

After the crater filled to a height of at least a few hundred yards and the sediments hardened into rock, the accumulated layers of sediment were sculpted over time into a mountainous shape by wind erosion that carved away the material between the crater perimeter and what is now the edge of the mountain.

On the 5-mile (8-kilometer) journey from Curiosity’s 2012 landing site to its current work site at the base of Mount Sharp, the rover uncovered clues about the changing shape of the crater floor during the era of lakes.

Despite earlier evidence from several Mars missions that pointed to wet environments on ancient Mars, modeling of the ancient climate has yet to identify the conditions that could have produced long periods warm enough for stable water on the surface. 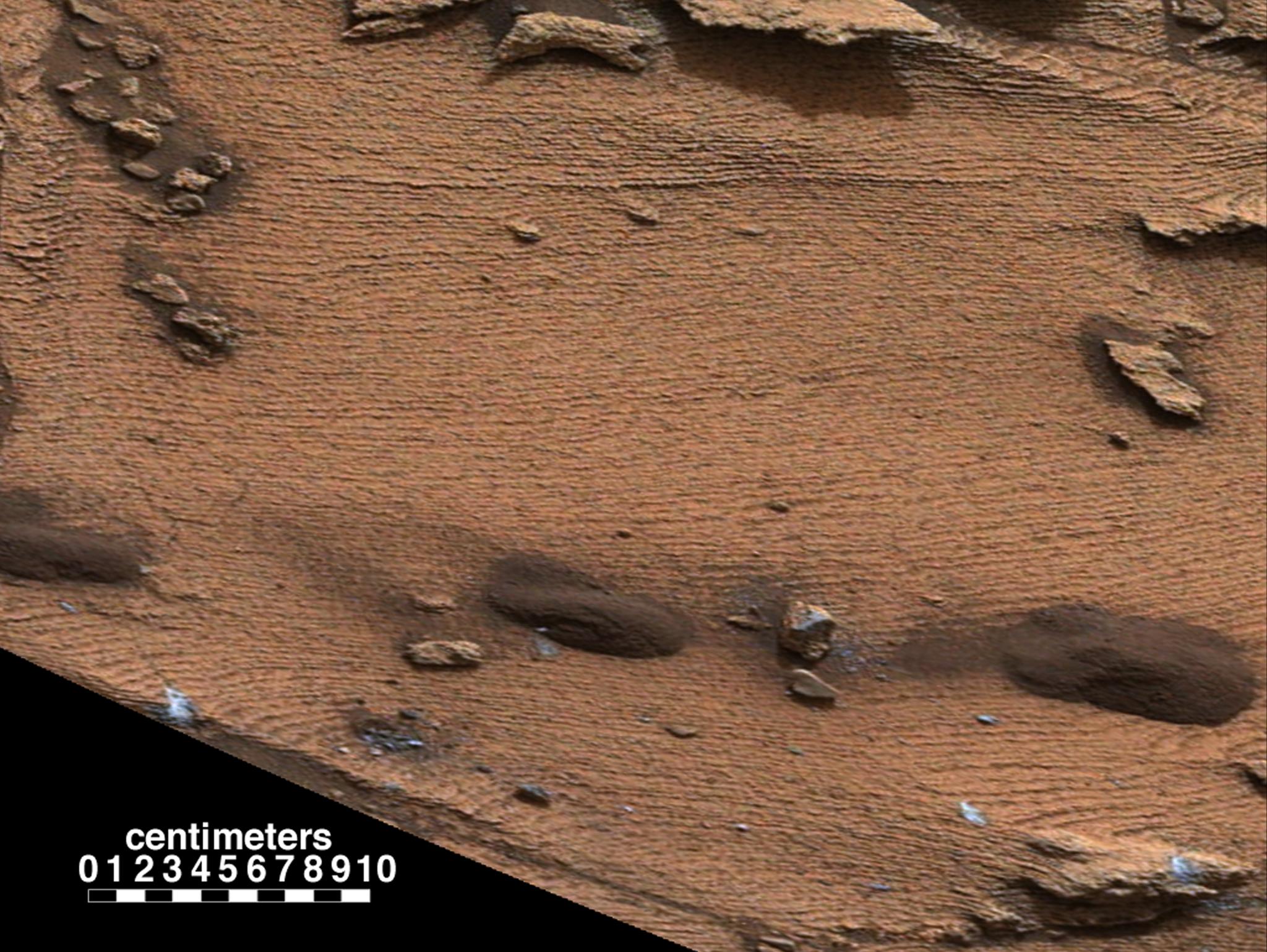 This image shows an example of a thin-laminated, evenly stratified rock type that occurs in the “Pahrump Hills” outcrop at the base of Mount Sharp on Mars. The Mastcam on NASA’s Curiosity Mars rover acquired this view on Oct. 28, 2014. This type of rock can form under a lake. Credit: NASA/JPL-Caltech/MSSS

NASA’s Mars Science Laboratory Project uses Curiosity to assess ancient, potentially habitable environments and the significant changes the Martian environment has experienced over millions of years. This project is one element of NASA’s ongoing Mars research and preparation for a human mission to the planet in the 2030s.

JPL, managed by the California Institute of Technology, built the rover and manages the project for NASA’s Science Mission Directorate in Washington.