NASA’s Pluto-bound New Horizons spacecraft has traversed the orbit of Neptune. This is its last major crossing en route to becoming the first probe to make a close encounter with distant Pluto on July 14, 2015.

“It’s a cosmic coincidence that connects one of NASA’s iconic past outer solar system explorers, with our next outer solar system explorer,” said Jim Green, director of NASA’s Planetary Science Division, NASA Headquarters in Washington. “Exactly 25 years ago at Neptune, Voyager 2 delivered our ‘first’ look at an unexplored planet. Now it will be New Horizons’ turn to reveal the unexplored Pluto and its moons in stunning detail next summer on its way into the vast outer reaches of the solar system.”

New Horizons now is about 2.48 billion miles from Neptune — nearly 27 times the distance between the Earth and our sun — as it crosses the giant planet’s orbit at 10:04 p.m. EDT Monday. Although the spacecraft will be much farther from the planet than Voyager 2’s closest approach, New Horizons’ telescopic camera was able to obtain several long-distance “approach” shots of Neptune on July 10. 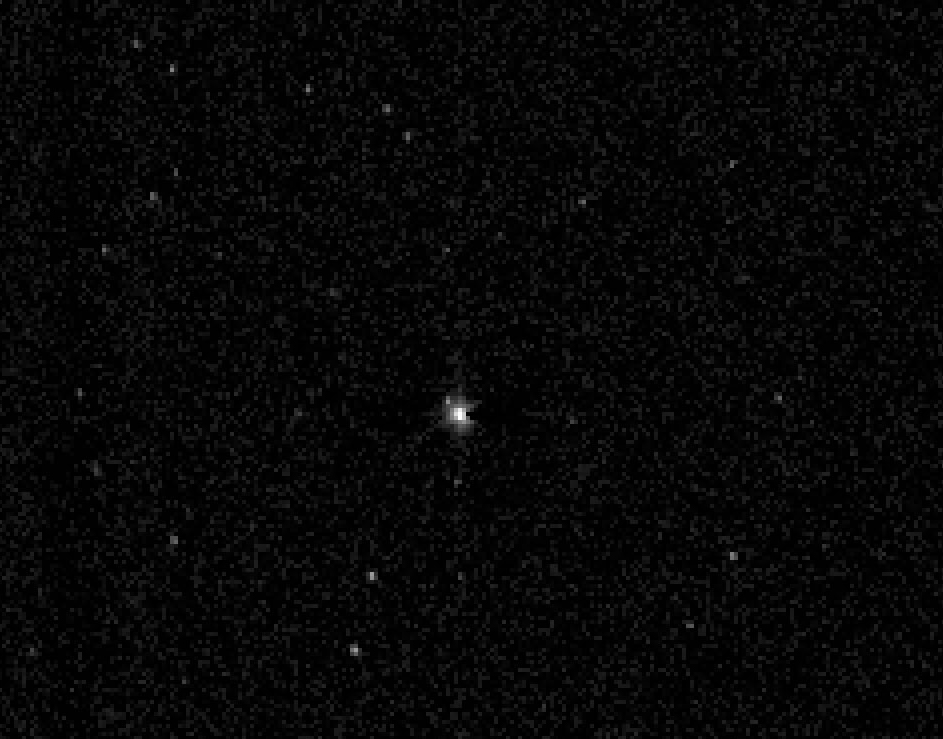 NASA’s Pluto-bound New Horizons spacecraft captured this view of the giant planet Neptune and its large moon Triton on July 10, 2014, from a distance of about 2.45 billion miles (3.96 billion kilometers) – more than 26 times the distance between the Earth and sun. Credit: NASA/Johns Hopkins University Applied Physics Laboratory

“NASA’s Voyager 1 and 2 explored the entire middle zone of the solar system where the giant planets orbit,” said Alan Stern, New Horizons principal investigator at the Southwest Research Institute in Boulder, Colorado. “Now we stand on Voyager’s broad shoulders to explore the even more distant and mysterious Pluto system.”

Several senior members of the New Horizons science team were young members of Voyager’s science team in 1989. Many remember how Voyager 2’s approach images of Neptune and its planet-sized moon Triton fueled anticipation of the discoveries to come. They share a similar, growing excitement as New Horizons begins its approach to Pluto.

“The feeling 25 years ago was that this was really cool, because we’re going to see Neptune and Triton up-close for the first time,” said Ralph McNutt of the Johns Hopkins University Applied Physics Laboratory (APL) in Laurel, Maryland, who leads the New Horizons energetic-particle investigation and served on the Voyager plasma-analysis team. “The same is happening for New Horizons. Even this summer, when we’re still a year out and our cameras can only spot Pluto and its largest moon as dots, we know we’re in for something incredible ahead.”

Voyager’s visit to the Neptune system revealed previously unseen features of Neptune itself, such as the Great Dark Spot, a massive storm similar to, but not as long-lived, as Jupiter’s Great Red Spot. Voyager also, for the first time, captured clear images of the ice giant’s ring system, too faint to be clearly viewed from Earth. “There were surprises at Neptune and there were surprises at Triton,” said Ed Stone, Voyager’s long-standing project scientist from the California Institute of Technology in Pasadena. “I’m sure that will continue at Pluto.”

Many researchers feel the 1989 Neptune flyby — Voyager’s final planetary encounter — might have offered a preview of what’s to come next summer. Scientists suggest that Triton, with its icy surface, bright poles, varied terrain and cryovolcanoes, is a Pluto-like object that Neptune pulled into orbit. Scientists recently restored Voyager’s footage of Triton and used it to construct the best global color map of that strange moon yet — further whetting appetites for a Pluto close-up.

“There is a lot of speculation over whether Pluto will look like Triton, and how well they’ll match up,” McNutt said. “That’s the great thing about first-time encounters like this — we don’t know exactly what we’ll see, but we know from decades of experience in first-time exploration of new planets that we will be very surprised.”

Similar to Voyager 1 and 2′s historic observations, New Horizons also is on a path toward potential discoveries in the Kuiper Belt, which is a disc-shaped region of icy objects past the orbit of Neptune, and other unexplored realms of the outer solar system and beyond.

“No country except the United States has the demonstrated capability to explore so far away,” said Stern. “The U.S. has led the exploration of the planets and space to a degree no other nation has, and continues to do so with New Horizons. We’re incredibly proud that New Horizons represents the nation again as NASA breaks records with its newest, farthest and very capable planetary exploration spacecraft.”

The Voyager spacecraft were built and continue to be operated by NASA’s Jet Propulsion Laboratory in Pasadena, California. The Voyager missions are part of NASA’s Heliophysics System Observatory, sponsored by the Heliophysics Division of the Science Mission Directorate.

To view the Neptune images taken by New Horizons and learn more about the mission, visit:

For more information about the Voyager spacecraft, visit: