After a decade-long journey through our solar system, New Horizons made its closest approach to Pluto Tuesday, about 7,750 miles above the surface — roughly the same distance from New York to Mumbai, India – making it the first-ever space mission to explore a world so far from Earth.

“I’m delighted at this latest accomplishment by NASA, another first that demonstrates once again how the United States leads the world in space,” said John Holdren, assistant to the President for Science and Technology and director of the White House Office of Science and Technology Policy. “New Horizons is the latest in a long line of scientific accomplishments at NASA, including multiple missions orbiting and exploring the surface of Mars in advance of human visits still to come; the remarkable Kepler mission to identify Earth-like planets around stars other than our own; and the DSCOVR satellite that soon will be beaming back images of the whole Earth in near real-time from a vantage point a million miles away. As New Horizons completes its flyby of Pluto and continues deeper into the Kuiper Belt, NASA’s multifaceted journey of discovery continues.” 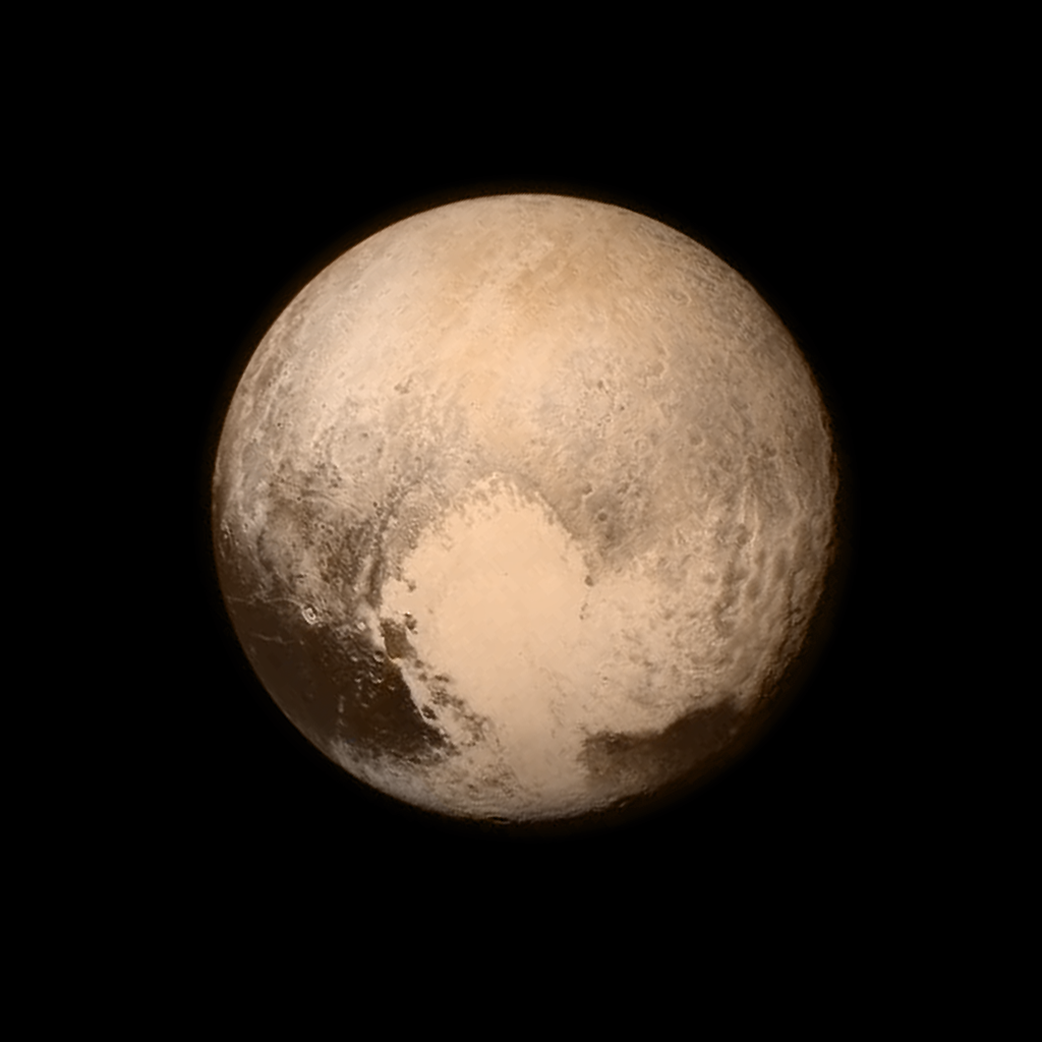 Pluto nearly fills the frame in this image from the Long Range Reconnaissance Imager (LORRI) aboard NASA’s New Horizons spacecraft, taken on July 13, 2015 when the spacecraft was 476,000 miles (768,000 kilometers) from the surface. This is the last and most detailed image sent to Earth before the spacecraft’s closest approach to Pluto on July 14. The color image has been combined with lower-resolution color information from the Ralph instrument that was acquired earlier on July 13. This view is dominated by the large, bright feature informally named the “heart,” which measures approximately 1,000 miles (1,600 kilometers) across. The heart borders darker equatorial terrains, and the mottled terrain to its east (right) are complex. However, even at this resolution, much of the heart’s interior appears remarkably featureless—possibly a sign of ongoing geologic processes. Credit: NASA/APL/SwRI

“The exploration of Pluto and its moons by New Horizons represents the capstone event to 50 years of planetary exploration by NASA and the United States,” said NASA Administrator Charles Bolden. “Once again we have achieved a historic first. The United States is the first nation to reach Pluto, and with this mission has completed the initial survey of our solar system, a remarkable accomplishment that no other nation can match.”

New close-up images of a region near Pluto’s equator reveal a giant surprise: a range of youthful mountains rising as high as 11,000 feet (3,500 meters) above the surface of the icy body. Credit: NASA/Johns Hopkins University Applied Physics Laboratory/Southwest Research Institute

The mountains likely formed no more than 100 million years ago — mere youngsters relative to the 4.56-billion-year age of the solar system — and may still be in the process of building, says Jeff Moore of New Horizons’ Geology, Geophysics and Imaging Team (GGI). That suggests the close-up region, which covers less than one percent of Pluto’s surface, may still be geologically active today.

Moore and his colleagues base the youthful age estimate on the lack of craters in this scene. Like the rest of Pluto, this region would presumably have been pummeled by space debris for billions of years and would have once been heavily cratered — unless recent activity had given the region a facelift, erasing those pockmarks.

“This is one of the youngest surfaces we’ve ever seen in the solar system,” says Moore.

Unlike the icy moons of giant planets, Pluto cannot be heated by gravitational interactions with a much larger planetary body. Some other process must be generating the mountainous landscape.

“This may cause us to rethink what powers geological activity on many other icy worlds,” says GGI deputy team leader John Spencer of the Southwest Research Institute in Boulder, Colo. The mountains are probably composed of Pluto’s water-ice “bedrock.”

Although methane and nitrogen ice covers much of the surface of Pluto, these materials are not strong enough to build the mountains. Instead, a stiffer material, most likely water-ice, created the peaks. “At Pluto’s temperatures, water-ice behaves more like rock,” said deputy GGI lead Bill McKinnon of Washington University, St. Louis.

The close-up image was taken about 1.5 hours before New Horizons closest approach to Pluto, when the craft was 47,800 miles (770,000 kilometers) from the surface of the planet. The image easily resolves structures smaller than a mile across.

A swath of cliffs and troughs stretches about 600 miles (1,000 kilometers) from left to right, suggesting widespread fracturing of Charon’s crust, likely a result of internal processes. At upper right, along the moon’s curving edge, is a canyon estimated to be 4 to 6 miles (7 to 9 kilometers) deep.

Mission scientists are surprised by the apparent lack of craters on Charon. South of the moon’s equator, at the bottom of this image, terrain is lit by the slanting rays of the sun, creating shadows that make it easier to distinguish topography. Even here, however, relatively few craters are visible, indicating a relatively young surface that has been reshaped by geologic activity.

In Charon’s north polar region, a dark marking prominent in New Horizons’ approach images is now seen to have a diffuse boundary, suggesting it is a thin deposit of dark material. Underlying it is a distinct, sharply bounded, angular feature; higher resolution images still to come are expected to shed more light on this enigmatic region.

The image has been compressed to reduce its file size for transmission to Earth. In high-contrast areas of the image, features as small as 3 miles (5 kilometers) across can be seen. Some lower-contrast detail is obscured by the compression of the image, which may make some areas appear smoother than they really are. The uncompressed version still resides in New Horizons’ computer memory and is scheduled to be transmitted at a later date.

The image has been combined with color information obtained by New Horizons’ Ralph instrument on July 13. New Horizons traveled more than three billion miles over nine-and-a-half years to reach the Pluto system.

The Pluto story began only a generation ago when young Clyde Tombaugh was tasked to look for Planet X, theorized to exist beyond the orbit of Neptune. He discovered a faint point of light that we now see as a complex and fascinating world.

“Pluto was discovered just 85 years ago by a farmer’s son from Kansas, inspired by a visionary from Boston, using a telescope in Flagstaff, Arizona,” said John Grunsfeld, associate administrator for NASA’s Science Mission Directorate in Washington. “Today, science takes a great leap observing the Pluto system up close and flying into a new frontier that will help us better understand the origins of the solar system.”

New Horizons’ flyby of the dwarf planet and its five known moons is providing an up-close introduction to the solar system’s Kuiper Belt, an outer region populated by icy objects ranging in size from boulders to dwarf planets. Kuiper Belt objects, such as Pluto, preserve evidence about the early formation of the solar system. 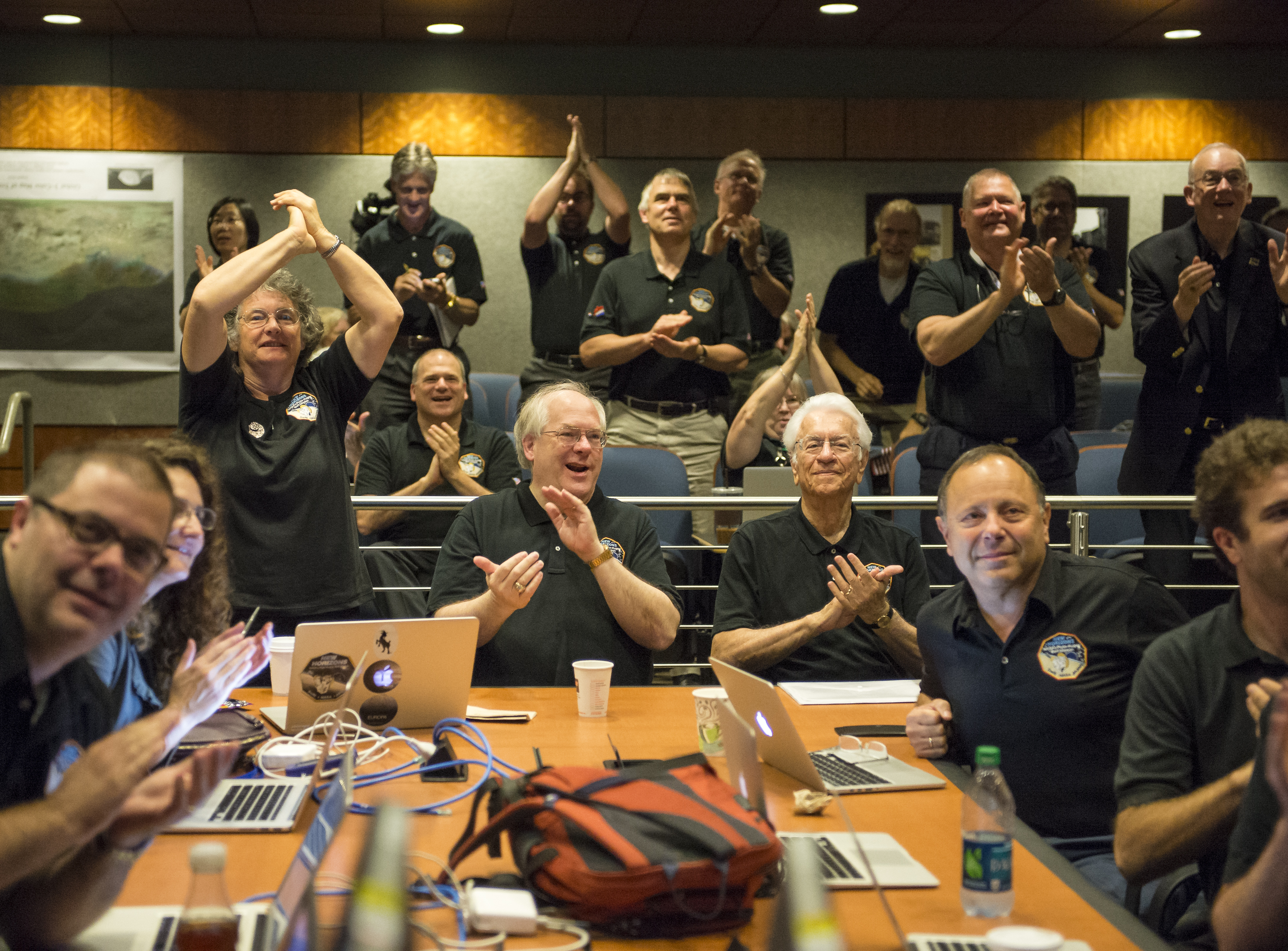 “The New Horizons team is proud to have accomplished the first exploration of the Pluto system,” Stern said. “This mission has inspired people across the world with the excitement of exploration and what humankind can achieve.”

New Horizons’ almost 10-year, three-billion-mile journey to closest approach at Pluto took about one minute less than predicted when the craft was launched in January 2006. The spacecraft threaded the needle through a 36-by-57 mile (60 by 90 kilometers) window in space — the equivalent of a commercial airliner arriving no more off target than the width of a tennis ball.

Because New Horizons is the fastest spacecraft ever launched – hurtling through the Pluto system at more than 30,000 mph, a collision with a particle as small as a grain of rice could incapacitate the spacecraft. Once it reestablishes contact Tuesday night, it will take 16 months for New Horizons to send its cache of data – 10 years’ worth — back to Earth.

New Horizons is the latest in a long line of scientific accomplishments at NASA, including multiple rovers exploring the surface of Mars, the Cassini spacecraft that has revolutionized our understanding of Saturn and the Hubble Space Telescope, which recently celebrated its 25th anniversary. All of this scientific research and discovery is helping to inform the agency’s plan to send American astronauts to Mars in the 2030’s.

“After nearly 15 years of planning, building, and flying the New Horizons spacecraft across the solar system, we’ve reached our goal,” said project manager Glen Fountain at APL “The bounty of what we’ve collected is about to unfold.”

Follow the New Horizons mission on Twitter and use the hashtag #PlutoFlyby to join the conversation. Live updates also will be available on the mission Facebook page.

For more information on the New Horizons mission, including fact sheets, schedules, video and images, visit:

We love you Pluto! Credit: Soderman/NASA