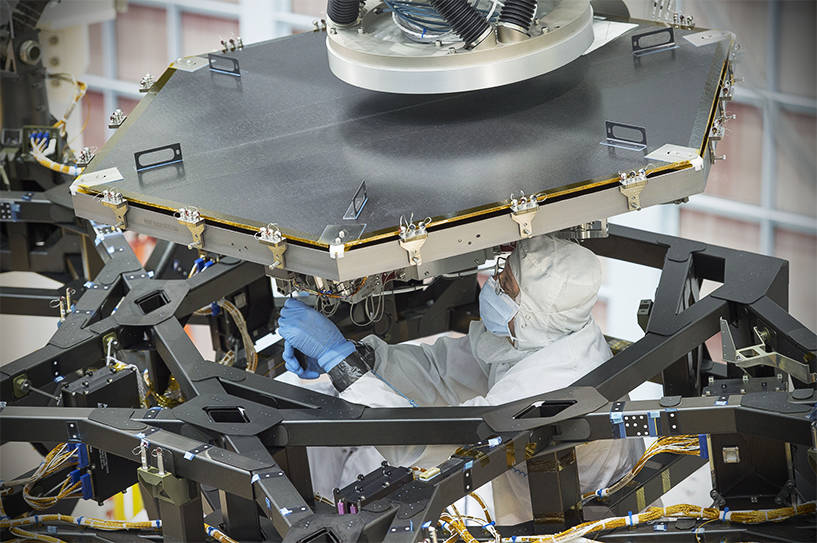 NASA has successfully installed the first of 18 flight mirrors onto the James Webb Space Telescope, beginning a critical piece of the observatory’s construction.

In the clean room at NASA’s Goddard Space Flight Center in Greenbelt, Maryland this week, the engineering team used a robot arm to lift and lower the hexagonal-shaped segment that measures just over 4.2 feet (1.3 meters) across and weighs approximately 88 pounds (40 kilograms). After being pieced together, the 18 primary mirror segments will work together as one large 21.3-foot (6.5-meter) mirror. The full installation is expected to be complete early next year.

“The James Webb Space Telescope will be the premier astronomical observatory of the next decade,” said John Grunsfeld, astronaut and associate administrator of the Science Mission Directorate at NASA Headquarters in Washington. “This first-mirror installation milestone symbolizes all the new and specialized technology that was developed to enable the observatory to study the first stars and galaxies, examine the formation stellar systems and planetary formation, provide answers to the evolution of our own solar system, and make the next big steps in the search for life beyond Earth on exoplanets.”

Several innovative technologies have been developed for the Webb Telescope, which is targeted for launch in 2018, and is the successor to NASA’s Hubble Space Telescope. Webb will study every phase in the history of our universe, including the cosmos’ first luminous glows, the formation of solar systems capable of supporting life on planets like Earth, and the evolution of our own solar system.

The 18 separate segments unfold and adjust to shape after launch. The mirrors are made of ultra-lightweight beryllium chosen for its thermal and mechanical properties at cryogenic temperatures. Each segment also has a thin gold coating chosen for its ability to reflect infrared light. The telescope’s biggest feature is a tennis court sized five-layer sunshield that attenuates heat from the sun more than a million times. 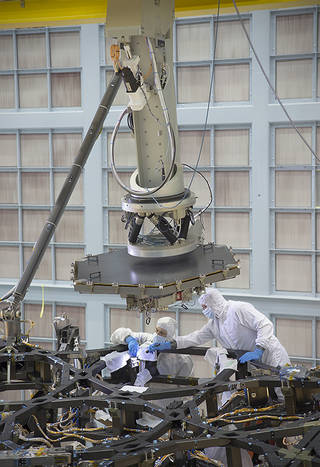 “After a tremendous amount of work by an incredibly dedicated team across the country, it is very exciting to start the primary mirror segment installation process” said Lee Feinberg, James Webb Space Telescope optical telescope element manager at Goddard. “This starts the final assembly phase of the telescope.”

The mirrors must remain precisely aligned in space in order for Webb to successfully carry out science investigations. While operating at extraordinarily cold temperatures between minus 406 and minus 343 degrees Fahrenheit, the backplane must not move more than 38 nanometers, approximately one thousandth the diameter of a human hair.

“There have many significant achievements for Webb over the past year, but the installation of the first flight mirror is special,” said Bill Ochs, James Webb Space Telescope project manager. “This installation not only represents another step towards the magnificent discoveries to come from Webb, but also the culmination of many years of effort by an outstanding dedicated team of engineers and scientists.”

The mirrors were built by Ball Aerospace & Technologies Corp., Boulder, Colorado. Ball is the principal subcontractor to Northrop Grumman for the optical technology and lightweight mirror system. The installation of the mirrors onto the telescope structure is performed by Harris Corporation of Rochester, New York. Harris Corporation leads integration and testing for the telescope.

The James Webb Space Telescope is an international project led by NASA with its partners, ESA (European Space Agency) and the Canadian Space Agency. NASA works with the international science community to explore our solar system and beyond. We look to unravel mysteries that intrigue us all as we explore to answer big questions, like how did our solar system originate and change over time, and how did the universe begin and evolve, and what will be its destiny?

You can follow the mirror installation on a live webcam by visiting:

To learn more about the James Webb Space Telescope, visit: