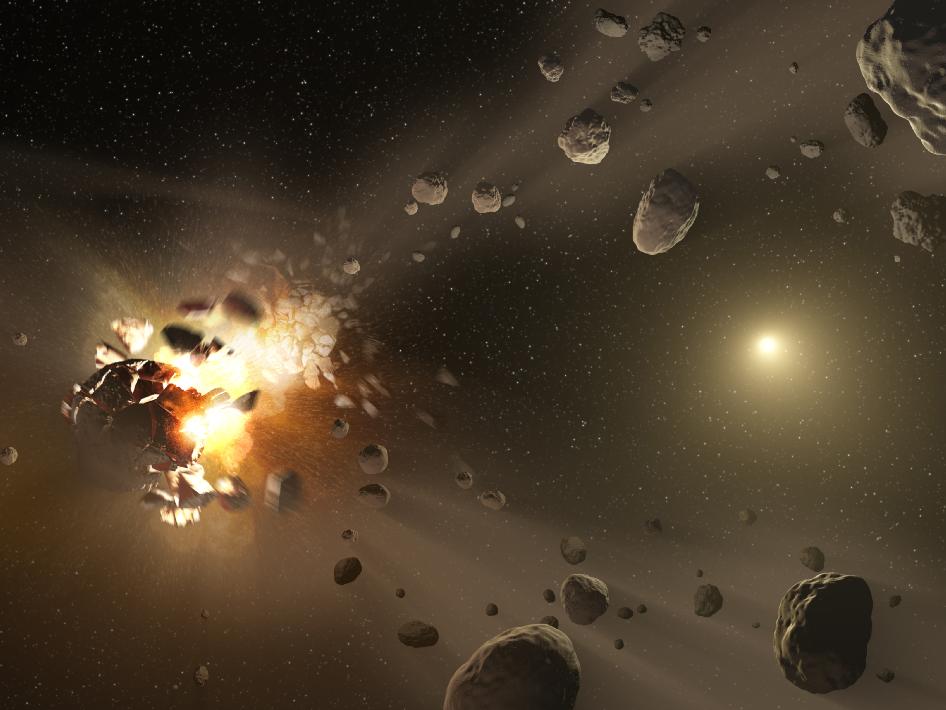 This artist’s conception shows how families of asteroids are created. Over the history of our solar system, catastrophic collisions between asteroids located in the belt between Mars and Jupiter have formed families of objects on similar orbits around the sun. New data from NASA’s NEOWISE project, based on observations made by the Wide-field Infrared Survey Explorer (WISE), have revealed the sizes and reflectivity of members of these asteroids families. The findings are helping scientists better understand how the families formed and evolved. Image credit: NASA/JPL-Caltech

Data from NASA’s Wide-field Infrared Survey Explorer (WISE) have led to a new and improved family tree for asteroids in the main belt between Mars and Jupiter.

Astronomers used millions of infrared snapshots from the asteroid-hunting portion of the WISE all-sky survey, called NEOWISE, to identify 28 new asteroid families. The snapshots also helped place thousands of previously hidden and uncategorized asteroids into families for the first time. The findings are a critical step in understanding the origins of asteroid families, and the collisions thought to have created these rocky clans.

“NEOWISE has given us the data for a much more detailed look at the evolution of asteroids throughout the solar system,” said Lindley Johnson, the program executive for the Near-Earth Object Observation Program at NASA Headquarters in Washington. “This will help us trace the NEOs back to their sources and understand how some of them have migrated to orbits hazardous to the Earth.”

The main asteroid belt is a major source of near-Earth objects (NEOs), which are those asteroids and comets that come within 28 million miles (45 million kilometers) of Earth’s path around the sun. Some near-Earth objects start out in stable orbits in the main asteroid belt, until a collision or gravitational disturbance flings them inward like flippers in a game of pinball.

The NEOWISE team looked at about 120,000 main belt asteroids out of the approximately 600,000 known. They found that about 38,000 of these objects, roughly one third of the observed population, could be assigned to 76 families, 28 of which are new. In addition, some asteroids thought to belong to a particular family were reclassified.

An asteroid family is formed when a collision breaks apart a large parent body into fragments of various sizes. Some collisions leave giant craters. For example, the asteroid Vesta’s southern hemisphere was excavated by two large impacts. Other smash-ups are catastrophic, shattering an object into numerous fragments, as was the case with the Eos asteroid family. The cast-off pieces move together in packs, traveling on the same path around the sun, but over time the pieces become more and more spread out.

Previous knowledge of asteroid family lineages comes from observations of their orbits. NEOWISE also looked at the asteroids’ reflectivity to identify family members.

Asteroids in the same family generally have similar mineral composition and reflect similar amounts of light. Some families consist of darker-colored, or duller, asteroids, while others are made up of lighter-colored, or shinier, rocks. It is difficult to distinguish between dark and light asteroids in visible light. A large, dull asteroid can appear the same as a small, shiny one. The dark asteroid reflects less light but has more total surface area, so it appears brighter.

NEOWISE could distinguish between the dark and light asteroids because it can detect infrared light, which reveals the heat of an object. The larger the object, the more heat it gives off. When the size of an asteroid can be measured, its true reflective properties can be determined, and a group of asteroids once thought to belong to a single family circling the sun in a similar orbit can be sorted into distinct families.

“We’re separating zebras from the gazelles,” said Joseph Masiero of NASA’s Jet Propulsion Laboratory (JPL) in Pasadena, Calif., who is lead author of a report on the new study that appears in the Astrophysical Journal. “Before, family members were harder to tell apart because they were traveling in nearby packs. But now we have a better idea of which asteroid belongs to which family.”

The next step for the team is to learn more about the original parent bodies that spawned the families.

“It’s as if you have shards from a broken vase, and you want to put it back together to find out what happened,” said Amy Mainzer, the NEOWISE principal investigator at JPL. “Why did the asteroid belt form in the first place and fail to become a planet? We are piecing together our asteroids’ history.”

JPL, a division of the California of Technology in Pasadena, managed and operated WISE for NASA’s Science Mission Directorate. The spacecraft was put into hibernation mode in 2011, after completing its main objectives of scanning the entire sky twice.

More information is online at: https://www.nasa.gov/wise