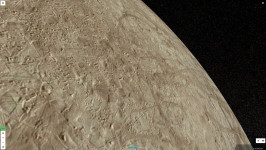 Europa is the smallest of the four large Galilean moons of Jupiter, having a diameter just slightly less than the Earth’s moon. It is a rocky world with a global icecap covering its surface. Measurements made from robotic space probes indicate that between the icy crust and rocky interior is an ocean of liquid water with a volume of perhaps two to three times that of the Earth’s oceans combined. This makes Europa a prime target in the search for life elsewhere in the Solar System. The chaotic, grooved, icy face of Europa represents one of the youngest, freshest surfaces found in the Solar System, indicating a very dynamic environment.

No spacecraft have yet orbited Europa, so we have a limited amount of data on this fascinating moon. However, several probes have made key observations of Europa while making flyby passes of this moon, most notably NASA’s Voyager 1 and 2 probes in 1979 and NASA’s Galileo probe, which made multiple detailed flybys of Europa while orbiting Jupiter between 1995 and 2003. Europa Trek combines Voyager and Galileo data to allow users to examine the spectacular surface of Europa and conduct interactive flights over its remarkable terrain. Europa Trek provides a preview for upcoming missions including NASA’s Europa Clipper mission and the European Space Agency’s Jupiter Icy Moon Explorer (JUICE) mission.

NASA’s Solar System Treks provides a collection of online, browser-based data visualization and analysis portals for a growing number of planets, moons, and asteroids in our Solar System. The portals allow mission planners, planetary scientists, students, and the general public to study these worlds as seen through the eyes of many instruments aboard a growing number of spacecraft. Development and operations of the Solar System Treks is done at NASA’s Jet Propulsion Laboratory, and the project is managed through NASA’s Solar System Exploration Research Virtual Institute.