New research by SSERVI’s Australia team contradicts the commonly held belief that Earth’s first stable continents were formed in a plate tectonic setting. The paper titled “Earth’s First Stable Continents Did Not Form by Subduction,” was published today in Nature.

“Uniformitarianism is the precept in geology that the processes we can observe happening today are those that have operated throughout Earth’s history,” Dr Johnson said.

“Many geologists have subscribed to the uniformitarian view that the first continental crust formed in subduction zones via modern-style plate tectonics. Some, however, believe that alternative (non-uniformitarian) processes were involved – our research supports the latter and suggests that the ancient granites in the Pilbara had not only parents but also grandparents, and possibly great-grandparents before them. Such a protracted history is not compatible with subduction and modern plate tectonics”.

Dr Johnson said examples of truly ancient continental crust – rocks formed around 3.5-4 billion years ago, in the early stages of the Archaean Eon – could still be found today, in places like Australia, South Africa, India, North America and Europe.

“Most exposed areas of Archaean crust include a specific type of granitic rocks known as TTGs,” Dr Johnson said.

“These rocks were formed by partial melting of a low magnesium basaltic source, and have a trace element signature that resemble crust produced in modern subduction settings.

“My previous research came to a similar conclusion, that plate tectonic processes are not required for the formation of the earliest continents, and that other mechanisms are plausible. We wanted to explore the hypothesis further, leading to our current findings.”

Samples were selected from the low magnesium basalts of the Coucal Formation at the base of the Pilbara Supergroup in the East Pilbara Terrane, Western Australia. These rocks, amongst the oldest basaltic lavas on Earth, have previously been shown to contain a trace element composition consistent with source rocks for TTGs.

“Through phase equilibria modeling of the Coucal basalts, we confirmed their suitability as TTG parents, suggesting they were produced by melting in a high geothermal gradient environment. By contrast, many researchers maintain that TTGs were formed in subduction zones, which are characterized by very low geothermal gradients,” Dr Johnson said.

“Additionally, the trace element signature of the Coucal basalts indicates that they were derived from an earlier generation of mafic rocks, suggesting this signature was inherited from an ancestral lineage.

“This leads us to believe that a protracted, multistage process, in combination with high geothermal gradients, was required for the production and stabilization of the first continents. These results are not consistent with formation of TTGs in subduction zones, but rather favor their production near the base of thick basaltic plateaux in the early Archaean.” 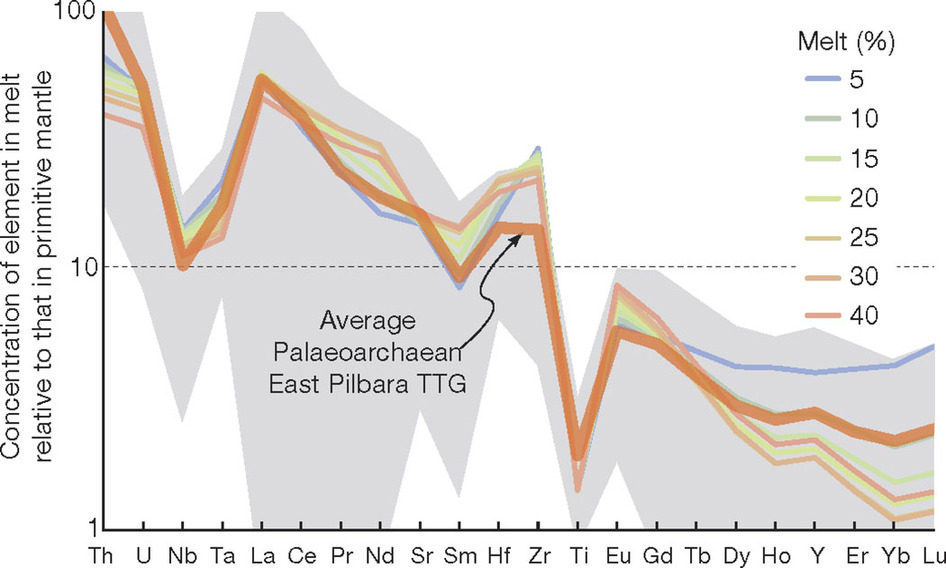