Rich Walker, a Co-Investigator with SSERVI’s Center for Lunar Science and Exploration (CLSE) team led by Principal Investigator David Kring at LPI/USRA, will be presented the Hess Medal at the fall AGU meeting. This is a proud moment for SSERVI as the Hess Medal is one of the most prestigious awards in geosciences. 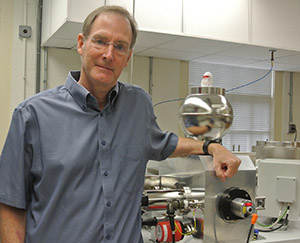 About the Hess Medal
The Harry H. Hess Medal is given annually to a senior scientist in recognition of outstanding achievements in research on the constitution and evolution of the Earth and other planets. Recipients of this award typically conduct research in the following disciplines: Earth and planetary surface processes, mineral rock physics, planetary sciences, study of the Earth’s deep interior, techtonophysics, volcanology, geochemistry, and petrology.

The Hess Medal is named in honor of Harry H. Hess, who made many contributions to geology, mineralogy, and geophysics. Hess served multiple terms as an AGU section president — for the Geodesy section (1950–1953) as well as the Tectonophysics section (1956–1959). He made major contributions to the study of the oceanic lithosphere, including the concept that convection cells in the mantle were the driving force for seafloor spreading.

For more information about the Hess Medal, visit: https://www.agu.org/Honor-and-Recognize/Honors/Union-Medals/Harry-H-Hess-Medal.

For the full list of 2019 AGU awards visit: https://eos.org/agu-news/2019-agu-union-medal-award-and-prize-recipients-announced.