Georgiana Kramer and her colleagues published the results of a remote sensing study conducted as a Center for Lunar Science and Exploration (CLSE) postdoc under the NASA Lunar Science Institute. The report is a comprehensive study of the basalts of Mare Frigoris on the Moon using remote sensing data from the Clementine, Lunar Prospector, and Lunar Reconnaissance Orbiters, with the objective of mapping and characterizing the compositions and eruptive history of its volcanic units.

The study found that basalts are unusually Aluminum-rich compared to most samples in the Apollo collection, and that the emplacement of the basalts may have been controlled by a major conduit that was detected by the GRAIL team. 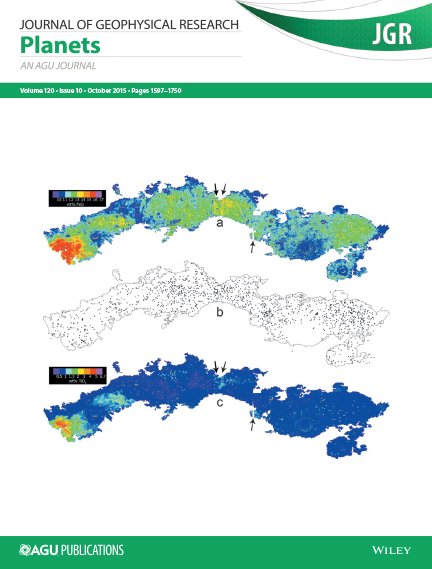 Dr. Kramer’s paper was featured on the cover of JGR Planets.

Most of the high-Al basalts in Frigoris are potentially undersampled, but are none-the-less an important group in the lunar sample collection for its clues about the heterogeneity of the lunar mantle.

Thorium abundances of most of the mare basalts in Frigoris are also low, although much of the mare surface appears elevated due to contamination from impact gardening with the surrounding Imbrium ejecta.

Mare Frigoris lies directly over the northern extent of the major conduit for a magma plumbing system detected by the Gravity Recovery and Interior Laboratory (GRAIL) mission, which likely fed many of the basalts that filled Oceanus Procellarum. The relationship between this deep-reaching magma conduit and the largest extent of high-Al basalts on the Moon makes Mare Frigoris an intriguing location for further investigation of the lunar mantle.