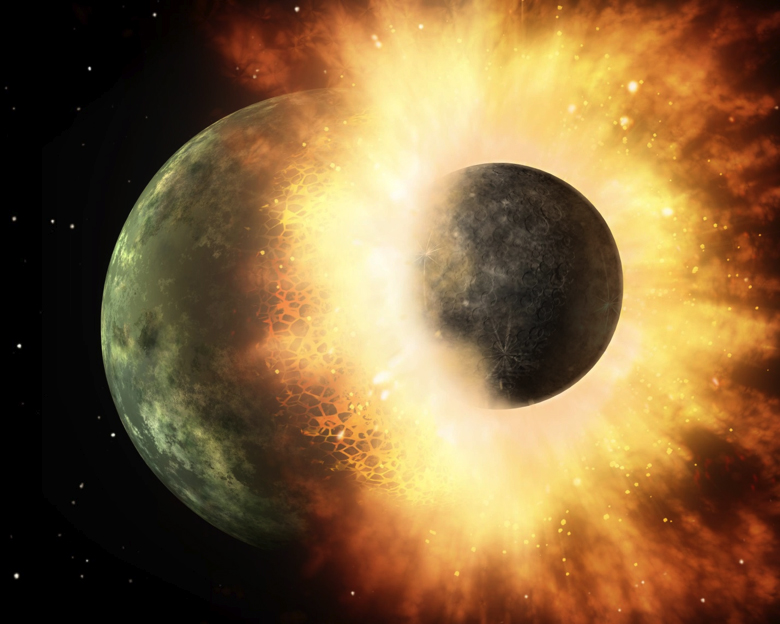 This artist’s rendition shows a giant impact similar to the one 4.5 billion years ago that scientists think created the Earth-Moon system. Southwest Research Institute scientists combined dynamical, thermal, and chemical models of the Moon’s formation after a giant impact to explain the relative lack of volatile elements in lunar rocks, when compared to those of Earth. Credit: NASA/JPL-Caltech

Scientists at Southwest Research Institute (SWRI) combined dynamical, thermal and chemical models of the Moon’s formation after a giant impact, in order to explain the relative lack of volatile elements in lunar rocks. Lunar rocks closely resemble Earth rocks in many respects, but Moon rocks are more depleted in volatile elements, like oxygen, carbon dioxide, potassium, sodium and zinc, which tend to have lower boiling points and vaporize readily.

“Explaining the Moon’s volatile depletion has been a long-standing mystery, and yet it is a key piece of evidence about how the Earth-Moon system formed,” said Dr. Robin Canup, associate vice president in SwRI’s Space Science and Engineering Division and lead author of the Nature Geoscience paper detailing the findings.

Scientists think the Moon formed from an Earth-orbiting disk of vapor and molten matter produced by a giant impact between Earth and another Mars-sized object approximately 4.5 billion years ago. Previously, scientists had considered that volatiles vaporized by the impact might have escaped before the Moon formed.

“However, few volatiles may have actually been lost because the velocity needed to escape the Earth’s gravity is quite high,” said Canup. “The new research suggests instead that as the Moon completed its growth, volatile-rich melt was preferentially deposited onto the Earth, rather than onto the growing Moon.”

Canup’s team, which included researchers from SwRI, Dordt College (Sioux Center, Iowa), and Washington University (St. Louis, Mo.), began with an existing computer simulation of the Moon’s accumulation from the disk. This was combined with models for how the temperature and chemical composition of the disk material evolves with time.

This animation of the Earth-Moon impact event shows an off-center, low-velocity collision of two protoplanets. Color scales indicate particle temperature in Kelvin, with blue-to-red indicating temperatures from 2,000 K to in excess of 6,440 K. After the initial impact, the protoplanets re-collide, merge and form a rapidly spinning Earth-mass planet surrounded by a volatile-poor protolunar disk. Credit: SwRI

The models show that the Moon acquires the final half of its mass from melt condensed in the inner portions of the disk, close to the Earth and just inside the Moon’s initial orbit. Over time, the Moon’s orbit expands due to dynamical interactions with inner disk material. When the Moon is distant enough, it can no longer efficiently accumulate inner disk melt, which is instead pulled inward and assimilated by the Earth.

“We find that the inner disk melt remains hot and volatile-poor as the Moon accretes material from this region. Eventually the disk cools and volatiles condense. But by the time this occurs the Moon’s accumulation from this inner disk region has essentially terminated,” said Canup. “So the final materials the Moon accumulates are lacking in volatile elements, even in the absence of escape.”

The authors suggest that the materials the Moon initially accumulates from outer disk material could be volatile-rich, followed by a final 100- to 500-kilometer layer of volatile-poor materials. In that case, the Moon’s volatile content could then vary with depth, depending on the extent of mixing in the Moon’s interior.

“In the ongoing debate about the origin of the Moon, this result helps to clarify how the Moon and Earth could have been formed in the same giant impact and yet retain some important differences in composition,” said Yvonne Pendleton, Director of NASA’s Solar System Exploration Research Virtual Institute.

The paper, “Lunar Volatile Depletion Due to Incomplete Accretion Within an Impact‐Generated Disk,” was published online in Nature Geoscience on November 9, 2015. This work was funded in part by the NASA Solar System Exploration Research Virtual Institute (SSERVI).