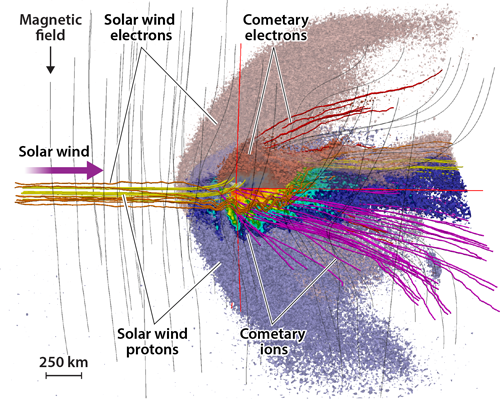 Deca and colleagues have simulated the rich dynamics of particles around a comet. Their 3D particle-in-cell simulations trace complex interactions between four separate interpenetrating collisionless fluids of particles—electrons and protons from the solar wind and electrons and ions from the comet—and the electromagnetic field produced by the whole ensemble. Only the magnetic component of the field is shown. Credit: J. Deca et al., Phys. Rev. Lett. (2017)

Practically anyone can recognize the distinct shape of a comet in the night sky: a small “match-head halo” with a long, feathery tail. Both the halo and tail are formed of material that sublimates off an icy nucleus and is then dragged out by the solar wind that fills interplanetary space. But the physics of the interaction between the solar wind and the comet material is surprisingly complex and hard to capture using conventional analysis or magnetohydrodynamic (fluid) simulations. Jan Deca, from the University of Colorado Boulder and NASA/SSERVI, and colleagues [1] have now produced detailed 3D particle-kinetic simulations of the intricate interaction between the solar wind and a comet. The results provide a clear “overview” of the rich physics of the most common cometary halos, including that of comet 67P/Churyumov-Gerasimenko observed by the Rosetta spacecraft.