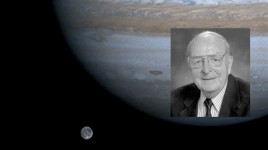 Stuart Ross Taylor of the Australian National University will receive the Shoemaker Distinguished Lunar Scientist Award for 2012. Yvonne Pendleton, Director of the NASA Lunar Science Institute, noted that Ross Taylor is one of the pioneers of lunar science, having studied lunar samples since the first Apollo sample return in July 1969. His books such as Lunar Science: A post-Apollo View have greatly influenced a generation of lunar and planetary scientists. As a member of the Preliminary Examination Team at NASA JSC, he carried out the first analysis of the first lunar sample returned to Earth. Subsequently as a NASA principal investigator for 20 years, he worked on models for lunar composition, evolution and origin.

The Shoemaker Distinguished Lunar Scientist Medal is an annual award given to a scientist who has significantly contributed to the field of lunar science throughout the course of their scientific career. The first Distinguished Lunar Scientist Award was given posthumously to Gene Shoemaker and presented to his wife Carolyn. The award was subsequently named after Shoemaker and includes a medal with the Shakespearian quote “And he will make the face of heaven so fine, that all the world will be in love with night.” The second Shoemaker medalist was Don E. Wilhelms (2010) and the third was G. Jeffrey Taylor (2011). The prize is presented at the annual Lunar Science Forum held each July, sponsored by the NASA Lunar Science Institute.

Ross Taylor grew up on a farm in New Zealand and earned both MS and BS science degrees in chemistry and geology at the University of New Zealand before completing his PhD in geochemistry at Indiana University with Brian Mason. He lectured at the Universities of Oxford and Cape Town before moving to the Research School of Earth Sciences at the Australian National University where he is currently an emeritus professor. He has also made many visits to the Lunar and Planetary Institute in Houston as a visiting fellow.

His research involves studies of the composition and evolution of the Moon, the Earth’s continental crust, tektites and impact glasses, island arc rocks, and many other topics involving trace-element geochemistry. He has published 240 scientific papers and nine books, including Lunar Science: A Post-Apollo View, Planetary Science: A Lunar Perspective, Solar System Evolution: A New Perspective, Destiny or Chance, The Continental Crust (with Scott McLennan) and Planetary Crusts (with Scott McLennan).