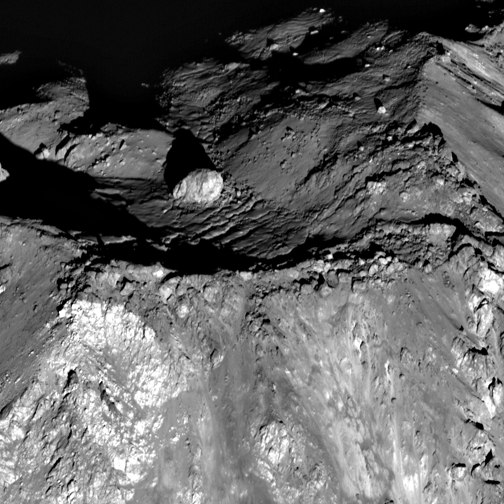 Oblique view of summit area of Tycho crater central peak. The boulder in the background is 120 meters wide, and the image is about 1200 meters wide. LROC NAC M162350671L,R [NASA/GSFC/Arizona State University].

On 10 June 2011 the LRO spacecraft slewed 65° to the west, allowing the LROC NACs to capture this dramatic sunrise view of Tycho crater. A very popular target with amateur astronomers, Tycho is located at 43.37°S, 348.68°E, and is ~82 km (51 miles) in diameter. The summit of the central peak is 2 km (6562 ft) above the crater floor, and the crater floor is about 4700 m (15,420 ft) below the rim. Many “clasts” ranging in size from 10 meters to 100s of meters are exposed in the central peak slopes. Were these distinctive outcrops formed as a result of crushing and deformation of the target rock as the peak grew? Or do they represent preexisting rock layers that were brought intact to the surface? Imagine future geologists carefully making their way across these steep slopes, sampling a diversity of rocks brought up from depth.

Tycho’s features are so steep and sharp because the crater is young by lunar standards, only about 110 million years old. Over time, micrometeorites, and not so micro meteorites, will grind and erode these steep slopes into smooth mountains. For a preview of what Tycho’s central peak may look like in a few billion years, visit Bhabha crater. 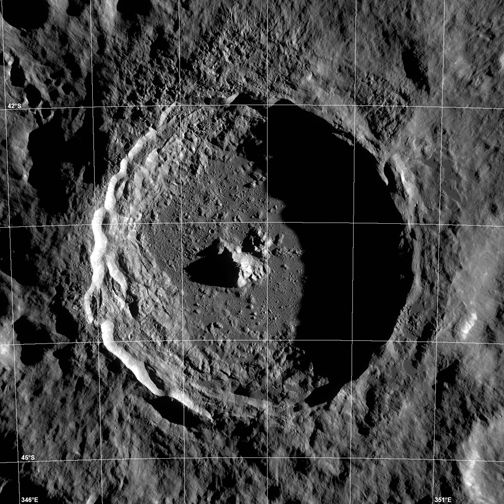 LROC WAC mosaic of Tycho crater with lighting similar to that when the NAC oblique image was taken. Mosaic is 130 km wide, north is up [NASA/GSFC/Arizona State University].

Another NAC pair acquired on 27 May 2010 gives an excellent straight down view of the summit (below), including the large boulder seen in today’s Featured Image. Also note the fractured impact melt deposit that surrounds the boulder. And the smooth area on top of the boulder, is that also frozen impact melt? These LROC images clearly show that the central peak formed very quickly; the peak was there when impact melt that was thrown straight up during the impact came back down. Amazing! Instant mountains! Or did the melt get there by a different mechanism? The fractures probably formed over time as the steep walls of the central peak slowly eroded and slipped downhill. Eventually the peak will erode back such that the big boulder will meet its demise as it slides 2000 meters to the crater floor. 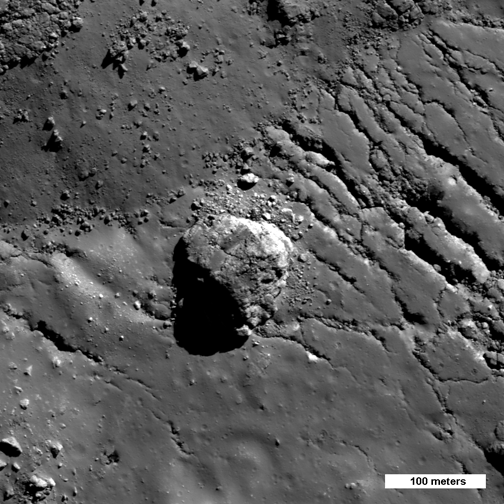 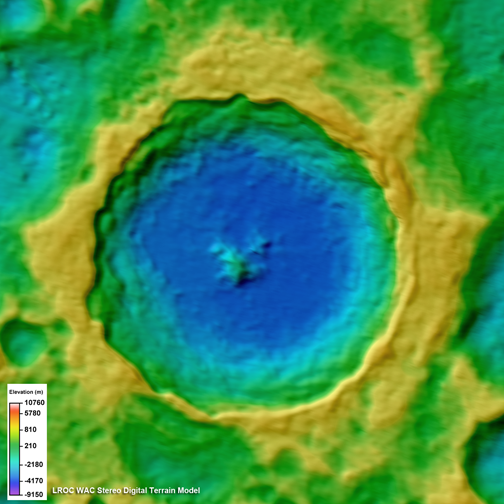 You can download the full resolution movie on the LROC homepage.

If you haven’t seen it yet, be sure to watch JAXA’s amazing 3D movie created from the Kaguya spacecraft flyover of Tyco crater [117MB MPG].