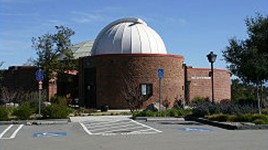 NLSI’s Brian Day invited me up to the Foothill College Observatory with the Peninsula Astronomical Society (PAS) team to record near-Earth asteroid 2005 YU55 passing within lunar orbit distance. It was my first visit to the Foothill Observatory. The sky was clear and dark and I was pretty excited to be part of this viewing.

A long winding staircase lead up to the dome which houses the observatory’s new computer-controlled 16-inch Schmidt-Cassegrain telescope. Everything was bathed in a red light just like my days in a dark room, when I photographed with film and worked with light sensitive materials. It made for a great post-halloween setting! The roof of the white dome was retracted leaving a sliver of sky overhead. The telescope rolled on its mount and the white dome rotated around as we peered up at the stars. This was a swath of sky where the astronomers thought they might find the near-earth asteroid.

It didn’t take long before Rick Baldridge, Chairman of PAS’ Oakridge Observatory, had 2005 YU55 in his sights. But the asteroid was moving so fast that it quickly went out of view!

A StellaCam 3 camera replaced the eyepiece so that everything seen through the telescope was projected onto a computer screen. He and past PAS President Bill Sorrells worked together to calibrate the image and track the asteroid, and soon they were able to keep it in the camera’s field of view.

“Amazing!” Rick said. “This is the fastest thing I have ever observed— and nice and bright too!”

I was surprised at how bright it was because 2005 YU55 is a C-type asteroid, which are carbonaceous and generally have the reflectivity of a lump of coal. I watched in amazement as the asteroid covered a distance of about a quarter of the moon’s diameter in under 2 minutes!

The PAS team experimented with different frame rates and exposure settings to highlight various objects passed by the asteroid. It seemed to run over a star for a brief occultation, and then passed over distant star clusters, nebulae and galaxies, taking us on a dramatic tour of the vast cosmos. The team also turned on the observatory’s webcam, and any on-line viewers were able to see the asteroid move across the monitor.

“That is something you don’t see everyday,” Sorrells said. Although the asteroid has an orbital period of 1.22 years, it will take the Earth about four years to cycle around to a similar close encounter.

2005 YU55 is about 1,300 feet in diameter and was advertised as being as long as an aircraft carrier, but it is actually much more massive than an aircraft carrier because it is 1,300 feet around in all directions! Although this pass came closer to Earth than our own Moon, the near miss posed no unusual level of danger. If it were to hit Earth, scientists estimated it would create a crater 4 miles across and generate a seven-magnitude-equivalent earthquake; a dramatic event to be sure but something that, on a planetary scale, is survivable.

After recording the video above, the team removed the camera and put back the eyepiece. Then we each got to watch with our naked eye as the asteroid cruised through the vastness of space. When observing with the eyepiece, the telescope had a much wider field of view which made it much easier to track the asteroid and allowed us to watch it move across the sky with fewer adjustments.

“This is definitely cool!” Said Brian Day. “An excellent demonstration of what amateur astronomers are capable of.”

For me it was a first, an experience of a lifetime. If you are interested in visiting the Foothill College Observatory, PAS offers weekly public programs which are free of charge to visitors of all ages. Note that the observatory is closed on cloudy days, but you can check the on-line calendar to see if a public observing session is scheduled and you can even check the observatory webcam online!