A Close Look at the Moon’s Dust Cloud

The Lunar Dust Experiment (LDEX) on board NASA’s Lunar Atmosphere and Dust Environment Explorer (LADEE) discovered the Moon is continually engulfed in a lopsided dust cloud from the steady barrage of meteoroid impacts. Researchers with SSERVI’s IMPACT team at University of Colorado have delved deeper into this newly discovered phenomenon to find that the density of the dust cloud correlates with how many meteoroids hit the Moon, and that the cloud itself could be used to better understand the meteoroid environment near Earth.

A paper by first author Jamey Szalay and SSERVI PI Mihaly Horanyi titled “Annual Variation and Synodic Modulation of the Sporadic Meteoroid Flux to the Moon” appeared in the latest journal of Geophysical Research Letters.

The Earth-Moon system is constantly bombarded by meteoroids, most of which are interplanetary dust particles. Unlike the Earth, whose thick atmosphere blocks the majority of incoming meteoroids before they reach the surface, the Moon’s surface is directly exposed to these particles. When a meteoroid impacts the lunar surface, it excavates a large amount of material and makes a big dust plume.

When the team analyzed the dust cloud’s density, they found that it was constantly being generated by meteoroid impacts and varied depending on how many meteorites were hitting the lunar surface at any given time. The dust plume grew larger during meteor showers, but it also increased when the Moon was hit by sporadic meteors not associated with any particular meteor shower. They also found that the lunar dust cloud density waxed and waned with lunar phase, peaking during the Moon’s waning gibbous phase. 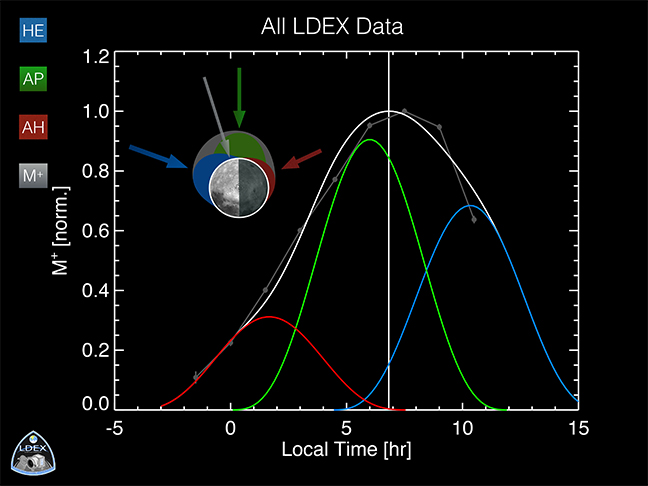 The best total ejecta fit (black) for the Helion (HE: blue), Apex (AP: green), and antihelion (AH: red) sources to the LDEX data (gray) from January to April 2014. The schematic in the top left indicates the directions of the various sources and the apparent peak ejecta direction. The LDEX observed density is normalized to unity. Credit: J.Szalay

It turns out the Moon’s dust cloud is quite sensitive and is generated by sources in an organized manner, which matches the influx of interplanetary particles observed at Earth. The results of their dust cloud study were consistent with ground-based measurements made during the observation period and indicate that the Moon could be used as a very sensitive large area dust detector to characterize the local meteoroid environment.

Because the dust cloud responds so closely to the local meteoroid environment, it provides a valuable resource, complementary to Earth-based measurements, for understanding the interplanetary dust particle population near Earth. Further out in space, an LDEX-type instrument in orbit around (or performing flybys of) another airless body in the solar system would be capable of gathering critical information about that local meteoroid environment as well. 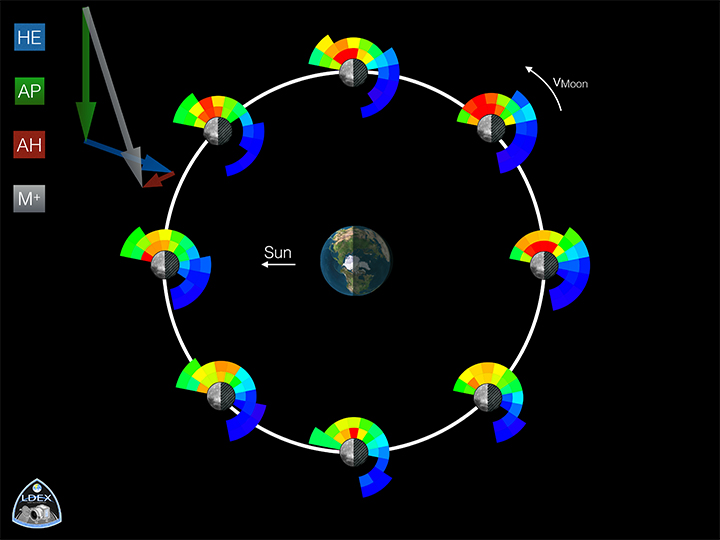 Lunar phase averaged cloud densities shown for 45∘ increments. Each color ring in the densities represent
40 km altitude bins. A peak lunar dust cloud density is observed while the Moon is in its waning gibbous phase,
consistent with the finding that the AP and HE sources dominate over the AH source in this observation period. Credit: J.Szalay

“We found the lunar dust cloud to be sensitive to small changes in impactor fluxes and velocities, adding further evidence that the Moon is an efficient large area dust detector,” said Szalay. “We can use the Moon as a complementary resource to characterize meteoroids and use the dust cloud as an additional tool to probe the meteoroid environment near Earth.”

Be sure to read the full paper for more details on the various sources of the Moon’s dust cloud.

NASA’s Lunar Atmosphere and Dust Environment Explorer (LADEE) was launched in September 2013 and impacted the Moon on April 18th, 2014. For more information about LADEE, visit: