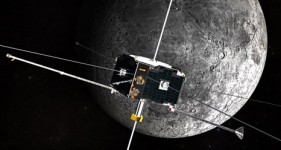 THEMIS was originally a constellation of five NASA satellites to study energy releases from Earth’s magnetosphere known as substorms. On May 19, 2008 the Space Sciences Laboratory (SSL) at Berkeley announced NASA has officially approved the movement of THEMIS B and THEMIS C into Lunar orbit under the mission name ARTEMIS (Acceleration, Reconnection, Turbulence and Electrodynamics of the Moon’s Interaction with the Sun).

So the ARTEMIS mission retasked two probes from the 5-spacecraft Heliophysics constellation THEMIS to study the interaction of the Moon with the space plasma environment. The two ARTEMIS spacecraft have now been in elliptical equatorial orbits around the Moon since mid-2011, and continue to operate flawlessly. Both probes are in very stable orbits, and the health of all instruments and the spacecraft remains very good.

Current ARTEMIS lunar investigations are focusing on measuring pickup ions from the exosphere, the electrostatic charging of the surface, the plasma wake, and the interaction of the solar wind with remanent crustal magnetic anomalies. ARTEMIS also uses lunar orbit as a platform to observe the solar wind and (around full Moon) the distant terrestrial magnetotail. More details on recent studies can be found at https://artemis.ssl.berkeley.edu/publications.shtml

Together, these three missions will team to measure the inputs, dynamics, and outputs of the coupled system formed by the Moon’s surface, its dusty exosphere, and the space environment.

All ARTEMIS data is publicly available on a few-day time scale, and we welcome participation from the community. More information on the mission, instrumentation, data (including summary plots), software, etc. is available from https://artemis.ssl.berkeley.edu, or by contacting the team directly.