Catalyst: Radiation Effects on Volatiles and Exploration of Asteroids and the Lunar Surface

A discussion between multiple SSERVI teams on issues of lunar science and exploration recently appeared in the ‘Catalyst’ section of the journal CHEM. The Catalyst approach is to seek out a new topic and have a discussion about it. The original article defining the issue is called a ‘Catalyst’ and the added comments to the article are called ‘Reactions’.

Prof. Thomas Orlando is currently a professor in the Georgia Institute of Technology (GIT) School of Chemistry and Biochemistry and an adjunct professor in the GIT School of Physics. He serves as director of the GIT Center for Space Technology and Research and as principal investigator (PI) of the NASA Solar System Exploration Research Virtual Institute Center on Radiation Effects on Volatiles and Exploration of Asteroids and Lunar Surfaces (REVEALS). The team is focused on understanding radiation effects on the regolith and the solar-wind formation of volatiles, mitigating health risks by developing nanocomposites for spacesuits and habitats, and exploring 2D materials for radiation detection. Collectively, the efforts will help facilitate future human exploration of near-Earth destinations. 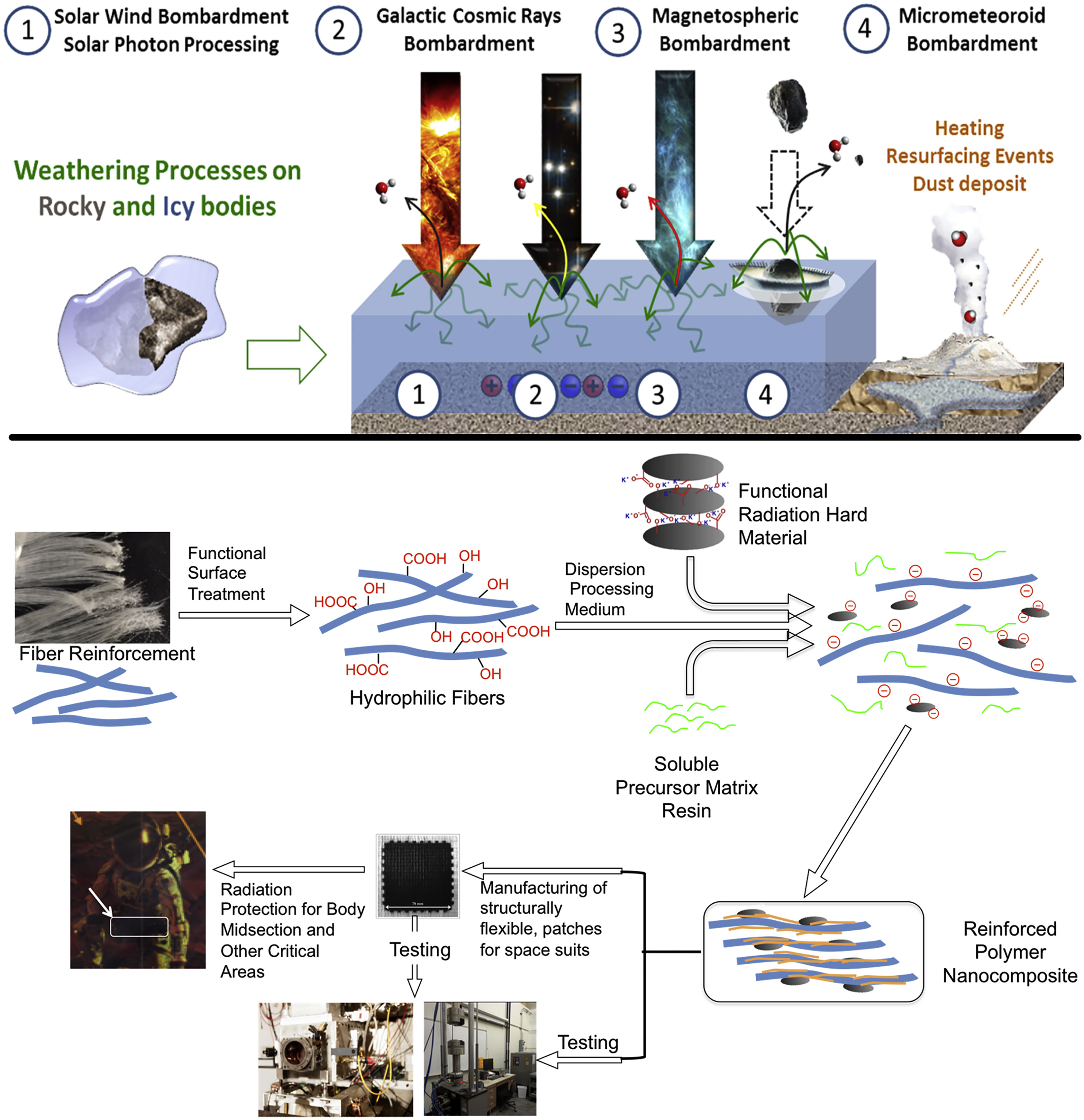 Overview of Research to Be Conducted by the REVEALS Investigation Team

(Top) Primary mechanisms of space weathering within the solar system; these include bombardment with solar wind, galactic cosmic rays, magnetospheric particles, and micrometeoroids. The formation of water and methane on airless bodies via solar wind will be investigated. Adapted with permission from Bennett et al.1 Copyright 2013 American Chemical Society.

Dr. William Farrell is a plasma physicist at NASA’s Goddard Space Flight Center. He is a co-investigator on the Cassini mission to Saturn and the Parker Solar Probe mission. He is also principal investigator of the DREAM2 Center for Space Environments (https://ssed.gsfc.nasa.gov/dream/), which examines the exosphere formation, radiation effects, and plasma interactions of the Moon and other airless bodies. Dr. Farrell has authored or co-authored over 200 journal articles on various aspects of space science, including the hydroxylation at the Moon, the curious plasma effects within the Enceladus plume, and the possibility of electricity generated in Martian dust devils. 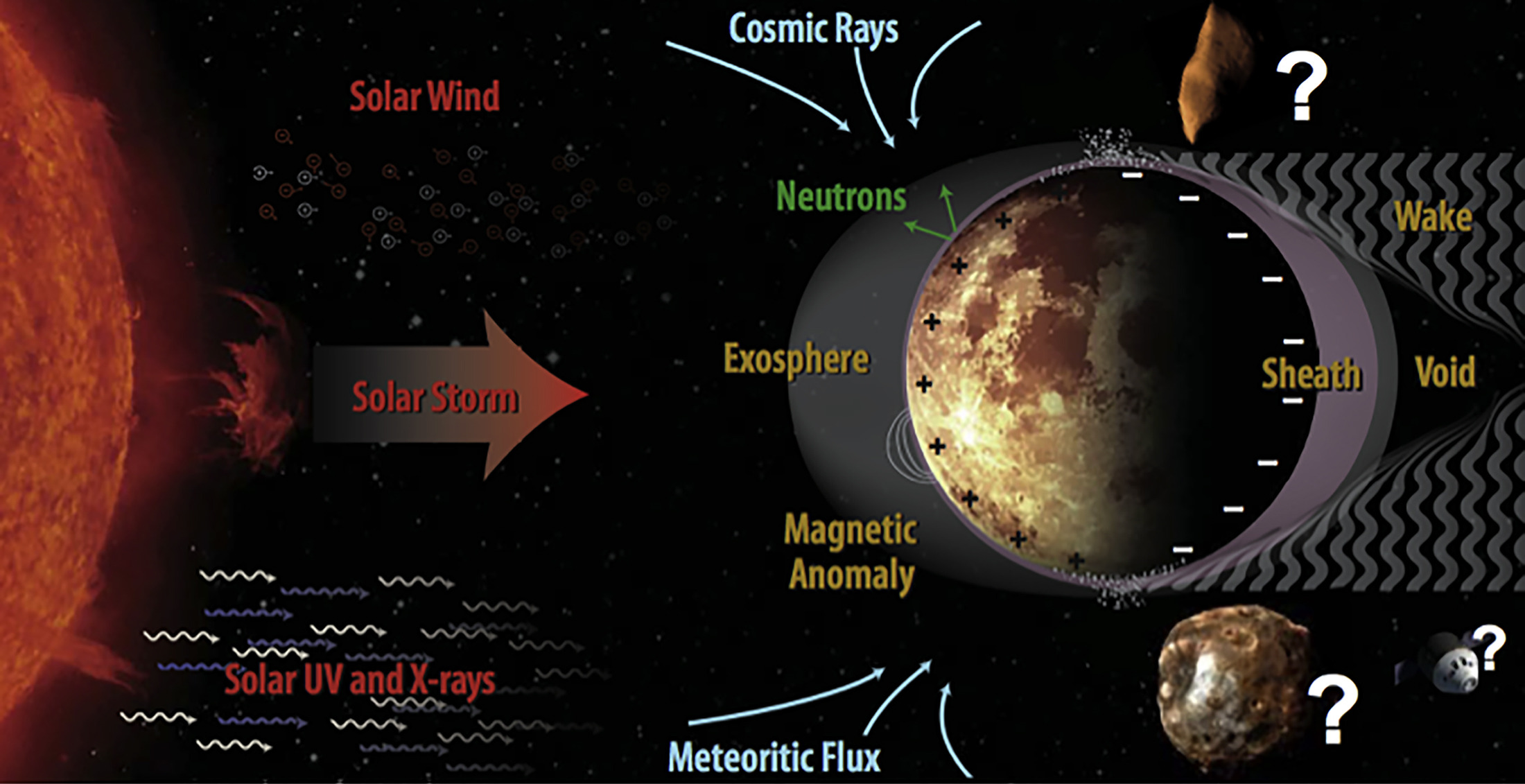 The Energy Drivers at an Exposed Surface, such as the Moon, and the Surface Response

This response includes the formation of an exosphere, an exo-ionosphere, dust lofting, and a trailing solar-wind plasma wake. On DREAM2, we also consider the environmental variations at small exposed bodies such as asteroids and Phobos—and the effect on the local environment by human systems. See https://ssed.gsfc.nasa.gov/dream/.

Prof. Foing is an advisor to the director general of the European Space Agency (ESA), a space astrophysicist at the European Space Research & Technology Centre (ESTEC), executive director of the International Lunar Exploration Working Group (ILEWG), and research professor at Vrije Universiteit Amsterdam and Florida Tech. He was chief scientist, chairman of the ESTEC staff association, and lead scientist for the ESA SMART-1 mission to the Moon. He is co-investigator of ESA missions SOHO, COROT, Mars Express, ExoMars, and EXPOSE experiments (FOTON capsules and International Space Station). He is manager of ILEWG ExoGeoLab and EuroMoonMars field simulations in extreme terrestrial analogs. 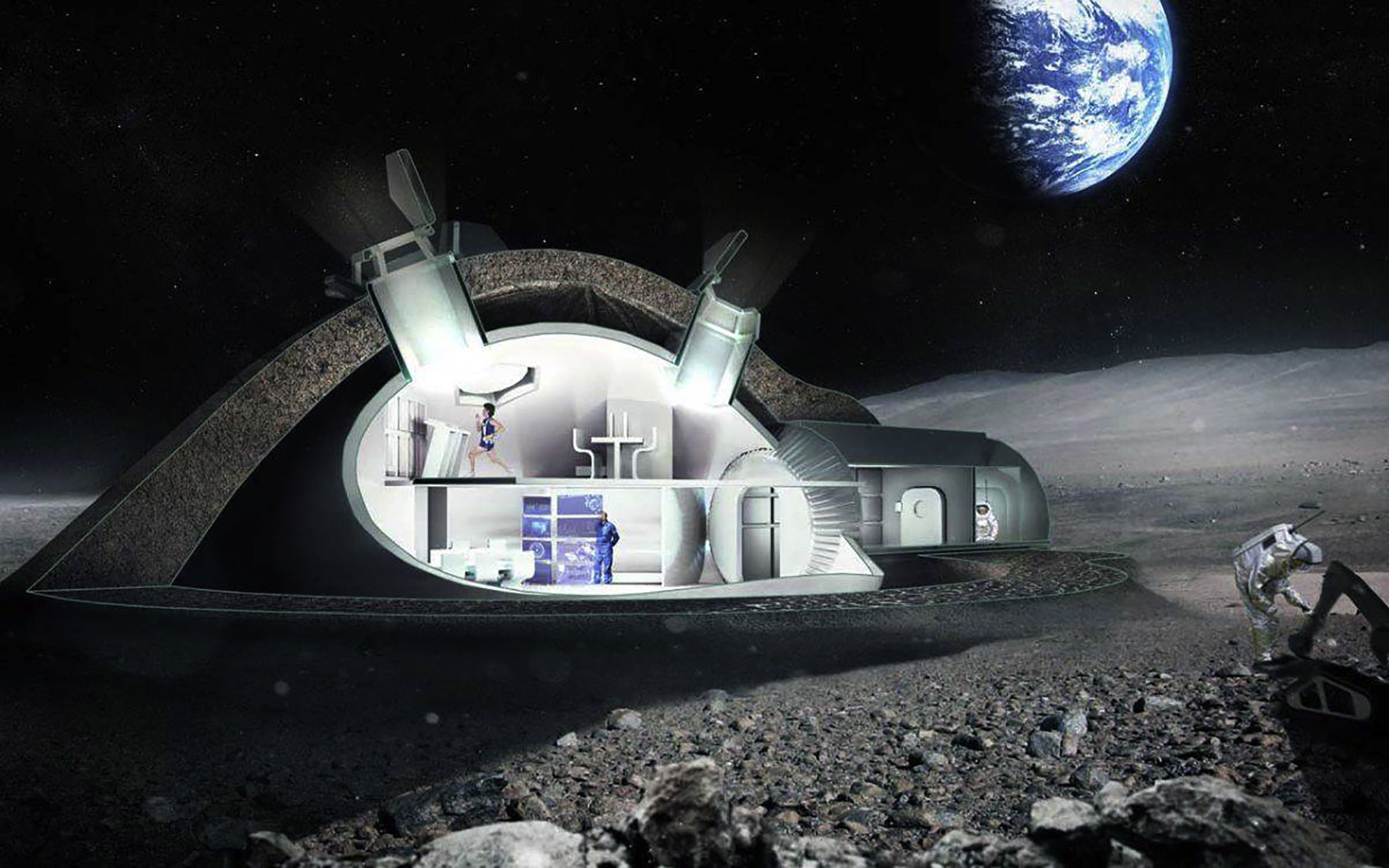 The shield can be built with a 3D printer and lunar regolith and can incorporate water ice available in polar soils. This material can provide stopping power against solar particle events, galactic cosmic rays, and meteoritic impacts. Image credit: ESA, Foster + Partners, and B.H.F.