Did the Moon Contribute to the Sinking of the Titanic?

A team of astronomers from Texas State University-San Marcos has examined how a rare lunar event may have helped cause hazardous sea ice conditions that sank the Titanic 100 years ago. Texas State physics faculty members Donald Olson and Russell Doescher, along with Roger Sinnott, senior contributing editor at Sky & Telescope magazine, publish their findings in the April 2012 edition of Sky & Telescope.

“Of course, the ultimate cause of the accident was that the ship struck an iceberg. The Titanic failed to slow down, even after having received several wireless messages warning of ice ahead,” Olson said. “They went full speed into a region with icebergs—that’s really what sank the ship, but the lunar connection may explain how an unusually large number of icebergs got into the path of the Titanic.”

Every month, as the Moon circles the Earth is its elongated orbit, its distance from the Earth varies. At perigee (its closest approach to Earth), it is 14 percent closer than at apogee, and when the Moon is simultaneously at perigee and in line with the sun, as happens at full moon and new moon, it produces the greatest tides. These tidal differences are measured in feet not fractions of an inch, and the unusually close approach by the Moon on Jan. 4, 1912, may have caused abnormally high tides. The Texas State research team investigated how pronounced this effect may have been.

What they found was that a once-in-many-lifetimes event occurred on Jan. 4 of 1912. The Moon and Sun had lined up in such a way their gravitational pulls enhanced each other, an effect known as a “spring tide.” The Moon’s perigee proved to be its closest in 1,400 years, and came within six minutes of a full moon, maximizing the Moon’s tide-raising forces on Earth’s oceans. On top of that, the Earth’s perihelion—closest approach to the sun—happened just the day before. The odds of all these variables lining up in just the way they did were astronomical.

Initially, the researchers looked to see if the enhanced tides caused increased glacial calving in Greenland, where most icebergs in that part of the Atlantic originated. They quickly realized that to reach the shipping lanes by April when the Titanic sank, any icebergs breaking off the Greenland glaciers in January 1912 would have to move unusually fast and against prevailing currents. But the ice field in the area the Titanic sank was so thick with icebergs that responding rescue ships were forced to slow down. Icebergs were so numerous, in fact, that the shipping lanes were moved many miles to the south for the duration of the 1912 season. Where did so many icebergs come from? 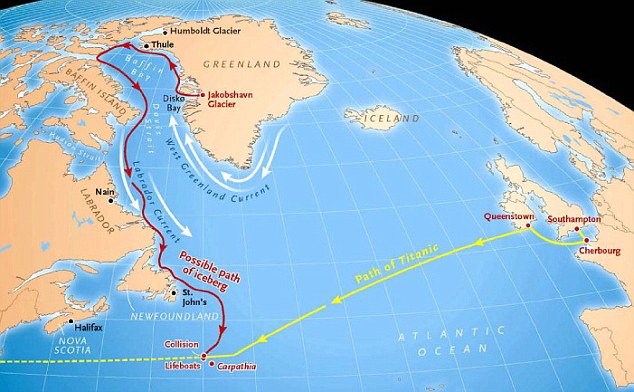 One possible path taken by the iceberg that sank Titanic 100 years ago. CREDIT: Texas State University

According to the Texas State group, the answer lies in grounded and stranded icebergs. As Greenland icebergs travel southward, many become stuck in the shallow waters off the coasts of Labrador and Newfoundland. Normally, icebergs remain in place and cannot resume moving southward until they’ve melted enough to refloat or a high enough tide frees them. A single iceberg can become stuck multiple times on its journey southward, a process that can take several years. But the unusually high tide in January 1912 could have been enough to dislodge many of those icebergs and move them back into the southbound ocean currents, where they would have just enough time to reach the shipping lanes for that fateful encounter with the Titanic. Other possibilities not examined in this paper are unusual winds that might also have played a role in moving floating ice into the North Atlantic shipping lanes. 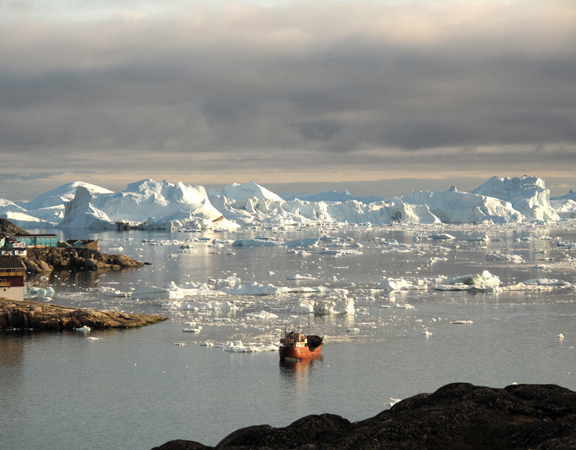 “As icebergs travel south, they often drift into shallow water and pause along the coasts of Labrador and Newfoundland. But an extremely high spring tide could refloat them, and the ebb tide would carry them back out into the Labrador Current where the icebergs would resume drifting southward,” Olson said. “That could explain the abundant icebergs in the spring of 1912. We don’t claim to know exactly where the Titanic iceberg was in January 1912—nobody can know that—but this is a plausible scenario intended to be scientifically reasonable.”