Not too long after the planets began forming, a Mars-sized object slammed into Earth, creating the debris that would coalesce into the moon. But some of the debris escaped all the way out to the asteroid belt. Collisions there left shock-heating signatures that can still be detected billions of years later in meteorites that have fallen to Earth. Planetary scientists have found that a significant number of these altered meteorites have ages clustering at 105 million years after the solar system’s birth—the true age of the moon-forming impact, they say. The result is an independent check on different estimates for the moon’s age, and it suggests that the asteroid belt could be witness to other ancient disruptions in the inner solar system. 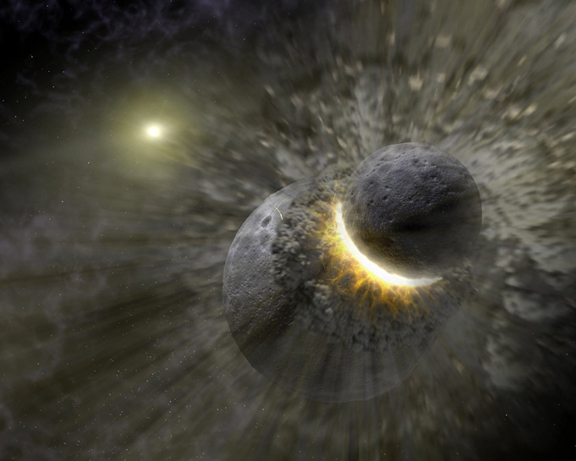 The inner Solar System’s biggest known collision was the Moon-forming giant impact between a large protoplanet and the proto-Earth. Kilometer-sized fragments from this impact hit main belt asteroids at much higher velocities than typical main belt collisions, heating the surface and leaving behind a permanent record of the impact event.

A team of NASA funded researchers modeled the evolution of giant impact debris and analyzed ancient impact heat signatures in stony meteorites to conclude that pieces of the Giant Impact did indeed strike the asteroid belt. The team’s work appears in the April 2015 issue of the journal Science.

Here a Mars-sized protoplanet strikes the proto-Earth at a 45 degree angle near the mutual escape velocity of both worlds. The “red” particles were found to escape the Earth-Moon system. Some of this debris may eventually go on to strike other solar system bodies like large main belt asteroids. “Yellow–green” particles go into the disk that makes the Moon. “Blue” particles were accreted by the proto-Earth. The details of this simulation can be found in Canup, R.: Simulations of a late lunar-forming impact, Icarus 168, 433–456, 2004. Credit: Robin Canup/Southwest Research Institute.

SSERVI Director Yvonne Pendleton, notes “this is an excellent example of the power of multidisciplinary science. By linking studies of the Moon, of main belt asteroids, and of meteorites that fall to Earth, we gain a better understanding of the earliest history of our Solar System.”

High-velocity impacts leave impressive fingerprints. They do more than make craters, they break up, mix, heat, and melt rock, leaving telltale signs of heat-shock that are visible in an optical microscope. Impact signatures allow researchers to gain insights into the last stages of planet formation and deduce the earliest bombardment history of ancient bodies like Vesta, one of the targets of NASA’s Dawn mission and a main belt asteroid whose fragments were delivered to Earth in the form of meteorites. It is possible that tiny remnants of the Moon-forming impactor or proto-Earth might be found within meteorites that show signs of heat-shock from giant impact debris. This would allow scientists to directly measure, for the first time, the unknown primordial nature of our home planet. 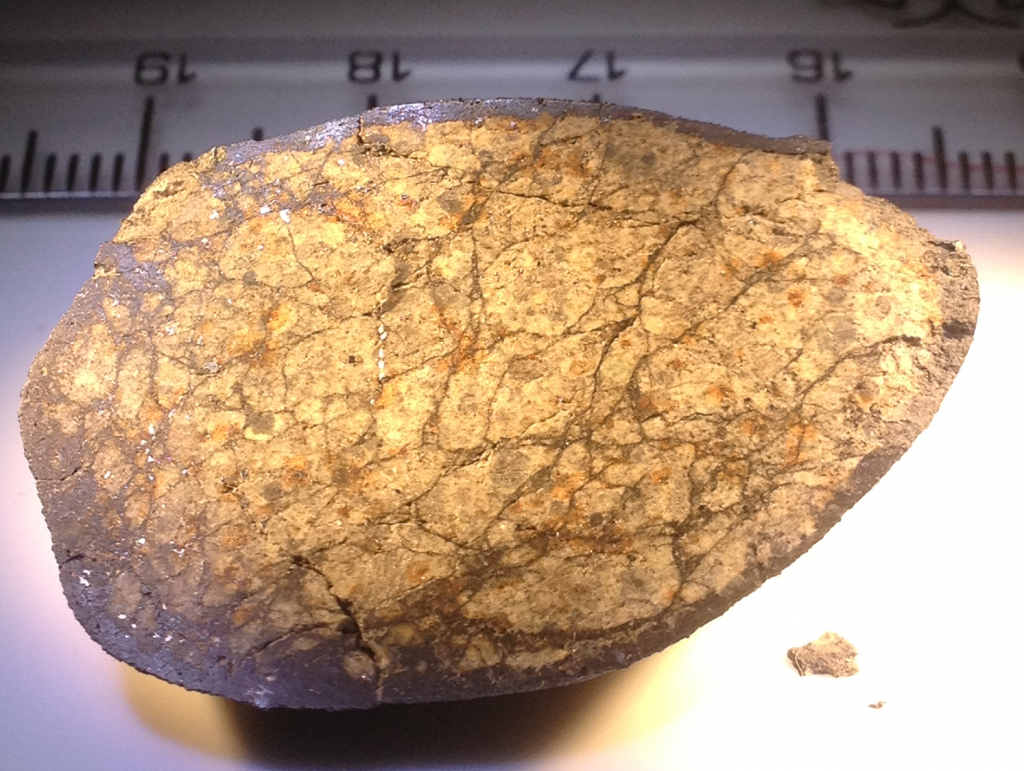 This Chelyabinsk meteorite specimen shows a highly developed network of thin impact melt veins (dark lines) and impact melt pockets (dark blobs). The dark material around the outside of the meteorite is not impact melt, but fusion crust created during atmospheric entry; the presence of fusion crust indicates this stone broke away from the main mass during entry. Shiny metallic grains are readily visible. Image credit: Qingzhu Yin, Univ. California-Davis.

By modeling the evolution of giant impact debris over time, and fitting the results to ancient impact heat signatures in stony meteorites, the team was able to infer the Moon formed ~4.47 billion years ago, in agreement with many previous estimates. The most ancient Solar System materials found in meteorites are about one hundred million years older. “The importance of giant impact ejecta returning to strike the Moon could also play an intriguing role in the earliest phase of lunar bombardment,” said Bottke. “This research is helping to refine our time scales for ‘what happened when’ on other worlds in the Solar System.”

Co-author Timothy Swindle, director of the University of Arizona’s Lunar and Planetary Laboratory, said: “It was Bill Bottke’s idea to look at the asteroid belt to see what effect a Moon-forming giant impact might have had, after expecting a lot of collisions in the period shortly afterwards. We determine the ages of impact events that affected meteorites in laboratory analysis and found that our data matched his predictions. It’s a great example of taking advantage of groups that work in two different specialties – orbital dynamics and chronology – and combining their expertise.”

The full paper can be found here.

For more information about SwRI, visit: