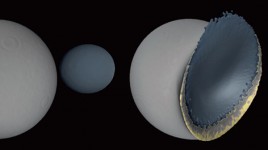 Forming the lunar farside highlands by accretion of a companion moon

The prevailing theory on lunar formation is the giant impact theory which suggests the moon formed when a Mars-sized body slammed into the infant Earth. This threw a cloud of vaporized and molten rock into orbit, which coalesced into the moon. Simulations have previously shown that additional moons could have formed from the debris cloud, sharing an orbit with the one large moon that survives today. Eventually, gravitational tugs from the sun would destabilize the moonlets, making them crash into the bigger one. New simulations could explain long-standing questions about the moon’s two-faced nature: the moon’s crust is thicker on its far side and differs in composition from rocks on the side facing Earth.

Martin Jutzi and Erik Asphaug at the University of California, Santa Cruz, have simulated the effect of an impact between the moon and a smaller sibling 1300 kilometres across, about one-third as wide. You can read their article published in Nature here. 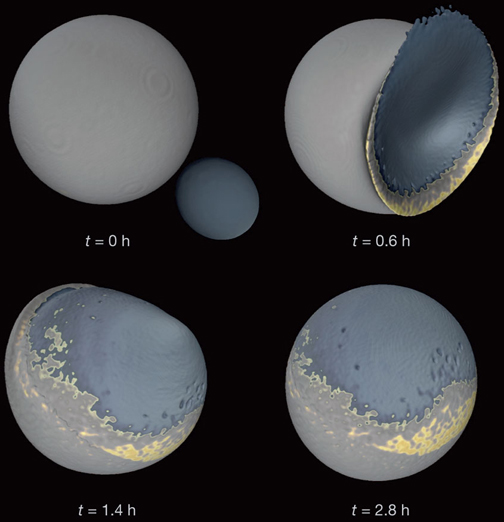 SPH simulations of the collision between the Moon and a companion moon, ~4% the lunar mass, dislodged from one of the Earth–Moon Trojan points, explore whether the Moon’s farside highlands and its nearside KREEP-rich terrain can be explained by this late, slow accretion. Snapshots (t, simulation time) show the case of a 2.4 km s−1, 45° impact of a 1,270-km-diameter Trojan moon impacting the 3,500-km-diameter Moon. Plotted is an iso-density surface ρiso = 2 g cm−3; lower density materials are invisible. Plotted colors indicate impactor crust (light blue), impactor mantle (dark blue), target crust (grey) and a layer of target upper mantle material (yellow) representing a magma ocean. Most of the impactor is accreted as a pancake-shaped layer, forming a mountainous region comparable in extent to the lunar farside highlands. A residual magma ocean, if present, gets pushed to the opposite hemisphere. Credit: M Jutzi & E. Asphaug; Nature

Crucially, such an impact would have happened at about 2 kilometres per second, which, although fast in everyday terms, is very low compared with the typical speeds of asteroids and comets striking the moon. The moons’ speed relative to each other is low because they travel in nearly the same orbit. Such a low-speed impact does not melt or vaporize rock, nor does it form a crater – it actually adds material to the moon. “In a way you do make a crater, but you fill it all in with the impactor material,” says Asphaug.

The smaller moon breaks up and spreads out from the collision point like a landslide, thickening the larger moon’s crust on one side. The impact also pushes subsurface magma to the opposite side of the moon from the crash point. This could explain why rocks on the moon’s near side are richer in potassium, phosphorus and other elements that suggest they were among the last rocks to solidify out of the moon’s primordial magma ocean. 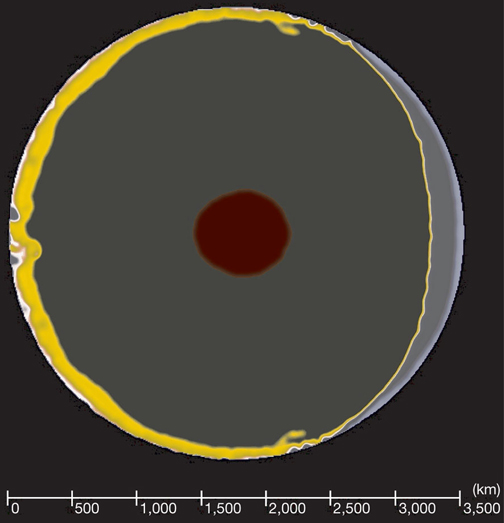 Two-dimensional view of the post-impact distribution of layers of target and impactor materials for the case of the head-on impact simulation. The companion moon collided from the right, accreting as a pile and producing the farside lunar highlands in our model. Grey and light blue correspond to the mantle and crust of the companion moon, respectively. The initially global residual magma ocean (yellow) is displaced to the opposite hemisphere, leading to an asymmetric distribution of KREEP. The initial ~20-km-thick crust of the target (white) is poorly resolved in the code, and not shown to scale.

One way to test the idea is to get rock samples from the far side, says NLSI Scientist Maria Zuber of the Massachusetts Institute of Technology. The simulation suggests rocks on the far side come mostly from the smaller moon, which should have previously cooled and solidified faster than the main moon, making its rocks older.