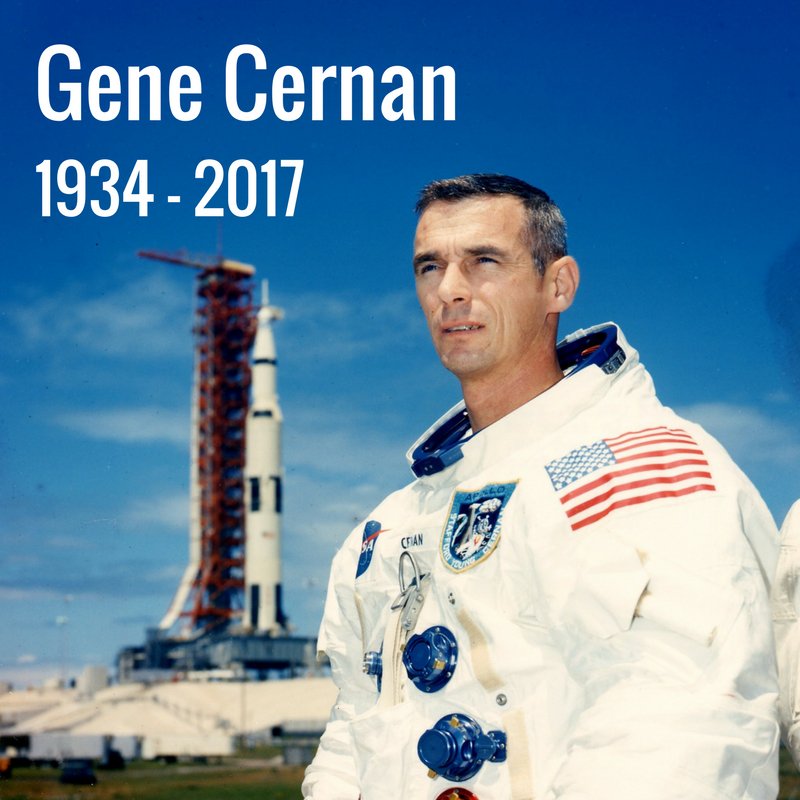 We are saddened by the loss of retired NASA astronaut Gene Cernan, the last man to walk on the moon.

Captain Cernan was one of only three people to go to the Moon twice and the last man to leave a footprint on the lunar surface in 1972.

The final words he spoke there were: “We leave as we came and, God willing, as we shall return with peace and hope for all mankind.”

He was the commander of the Apollo 17 mission at the time.

Twelve people have walked on the Moon, and only six of them are still alive today.

A qualified naval aviator, he was selected into the third group of Nasa astronauts in 1963.

He retired in 1976, going into private business and contributing to US television channels on a variety of issues.

Cernan also produced a documentary film about his life.

Born on 14 March 1934 in Chicago, his full name was Eugene Andrew Cernan.

He is survived by his wife Jan Nanna Cernan, his daughter and two step-daughters and also nine grandchildren.

The family of Apollo Astronaut Capt. Eugene Cernan, the last man to walk on the Moon, announced that he passed away today following ongoing health issues.

“It is with very deep sadness that we share the loss of our beloved husband and father,” said Cernan’s family. “Our family is heartbroken, of course, and we truly appreciate everyone’s thoughts and prayers. Gene, as he was known by so many, was a loving husband, father, grandfather, brother and friend.”

“Even at the age of 82, Gene was passionate about sharing his desire to see the continued human exploration of space and encouraged our nation’s leaders and young people to not let him remain the last man to walk on the Moon,” the family continued.

Humbled by his life experiences, particularly as an Apollo Astronaut, the retired Naval officer recently said, “I was just a young kid in America growing up with a dream. Today what’s most important to me is my desire to inspire the passion in the hearts and minds of future generations of young men and women to see their own impossible dreams become a reality.”

As we say goodbye, it seems fitting to share the last line in Gene’s book, THE LAST MAN ON THE MOON, as he explains his experience of walking on the Moon to his then five-year-old granddaughter, “Your Popie went to Heaven. He really did.”

Details regarding his funeral will be announced in the coming days.

The following is a statement from NASA Administrator Charles Bolden on the passing of Gemini and Apollo astronaut Gene Cernan:

“Gene Cernan, Apollo astronaut and the last man to walk on the moon, has passed from our sphere, and we mourn his loss. Leaving the moon in 1972, Cernan said, ‘As I take these last steps from the surface for some time into the future to come, I’d just like to record that America’s challenge of today has forged man’s destiny of tomorrow.’ Truly, America has lost a patriot and pioneer who helped shape our country’s bold ambitions to do things that humankind had never before achieved.

“Gene first served his country as a Naval Aviator before taking the pilot’s seat on the Gemini 9 mission, where he became the second American to walk in space and helped demonstrate rendezvous techniques that would be important later. As a crew member of both the Apollo 10 and 17 missions, he was one of three men to have flown twice to the moon. He commanded Apollo 17 and set records that still stand for longest manned lunar landing flight, longest lunar surface extravehicular activities, largest lunar sample return, and longest time in lunar orbit.

“Gene’s footprints remain on the moon, and his achievements are imprinted in our hearts and memories. His drive to explore and do great things for his country is summed up in his own words:

‘We truly are in an age of challenge. With that challenge comes opportunity. The sky is no longer the limit. The word impossible no longer belongs in our vocabulary. We have proved that we can do whatever we have the resolve to do. The limit to our reach is our own complacency.’

“In my last conversation with him, he spoke of his lingering desire to inspire the youth of our nation to undertake the STEM (science, technology, engineering and mathematics) studies, and to dare to dream and explore. He was one of a kind and all of us in the NASA Family will miss him greatly.”

Today we lost yet another hero. Gene Cernan and I met for the first time when we were selected for the third group of astronauts in November of 1963. We started our training together in January of 1964 and eventually worked together as the backup crew of Gemini 9. He was a Navy guy and I was Air Force so there was always a friendly dose of ribbing and trying to one up each other that continued to this day. We had the very interesting task of training together on the maneuvering unit – a jet pack like George Clooney used in the movie “Gravity”, which was a fascinating project and was quite complicated. Unfortunately, NASA felt it was too risky so we weren’t able to use it during our Gemini missions.

I left NASA before Gene’s mission to the Moon on Apollo 17 but of course followed it closely with the rest of the world. He served the nation extremely well on his mission with Ron Evans and the first scientist astronaut, Jack Schmitt. It was the final mission to the Moon but our hopes had been that we would press forward and eventually be on Mars as the next destination. Unfortunately, that hasn’t happened and Gene is the last person to step foot on another celestial body. He was the last man on the moon and he wasn’t happy about that and continually stressed that he didn’t want to be the last.

Gene was probably the strongest spokesman for astronauts for lunar travel and advocating a return to the moon. He made multiple trips to Washington to give testimony along with Neil Armstrong and Jim Lovell to promote NASA and not losing our pioneering spirit. He wasn’t really a Mars guy like me, but he cared deeply about continuing manned space exploration.

Us astronauts will always remember his cheerful and smiling approach to everything. With the passing of the First Man – Neil Armstrong, and the passing of the Last Man – Gene Cernan, it is up to us Middle Men to carry on spirit of Apollo into the future for our Nation and the world.