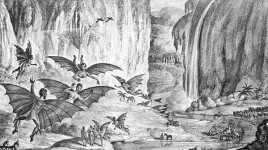 The Moon has its share of conspiracy, including people who think NASA faked the Apollo Moon missions in the 1960s and ’70s. Missions like the Lunar Reconnaissance Orbiter, which have taken pictures of the Apollo landing sites while orbiting ~30 miles above the rugged lunar terrain, make it much harder to remain a doubter; today there are extremely well characterized, high resolution images that clearly show the landers, buggies, equipment and footprints left behind by the astronauts.

Amazingly, people still question the Moon landings. They cite things like the “American flag waving” in space, despite the plausible explanation that test-firing thrusters near the flag caused it to wave, or that there was a spring inside the deployment boom which would continue to shake the flag in an airless vacuum, making it “appear” to be waving. There are answers to all the questions raised by the non-believers, but one of the strongest arguments (besides LRO’s evidence) is that all the Apollo missions were independently tracked by England and Russia (our allies and enemies), both of whom sent letters of congratulations after the Moon landings. In the midst of a heated space race, the Russians would have called our bluff if the landings had not actually happened.

Bart Sibrel, a Nashville, Tenn., filmmaker, and camera crew confronted many of the lunar astronauts after they returned to Earth, demanding they admit the landings were faked. He was punched in the face when he went after Buzz Aldrin ( a U.S. judge later dismissed the assault charge against the astronaut). After accomplishing one of the greatest feats of humankind, that might have been my reaction too Buzz!

But perhaps one of the greatest Moon hoaxes of all time was in 1835, when a New York newspaper started reporting incredible new astronomical observations of the Moon supposedly made by astronomer Sir John Herschel with his powerful new telescope. There was life on the Moon! And a civilization!

Listen to the 365 Days of Astronomy podcast here.