Mars Orbiter Mission (MOM) is India’s first interplanetary mission to Mars. The indigenously built spacecraft was designed to orbit Mars in an elliptical orbit. As India’s first foray into interplanetary missions and space exploration, MOM is primarily a technological mission designed to show that India has the technical capability to get a spacecraft to Mars. ISRO is raising the bar by launching MOM into orbit around the red planet; ISRO scientists will be studying the critical mission operations and stringent requirements on propulsion and other spacecraft systems.

One of the main objectives of the first Indian mission to Mars is to develop the technologies required to design, plan, manage and operate an interplanetary mission. Technological Objectives include deep space communication, navigation, mission planning and management with autonomous features incorporated to handle contingency situations. Scientific Objectives include exploration of Mars surface features, morphology, mineralogy and to scan scan Martian atmosphere for methane, which is produced here on Earth primarily by living organisms. 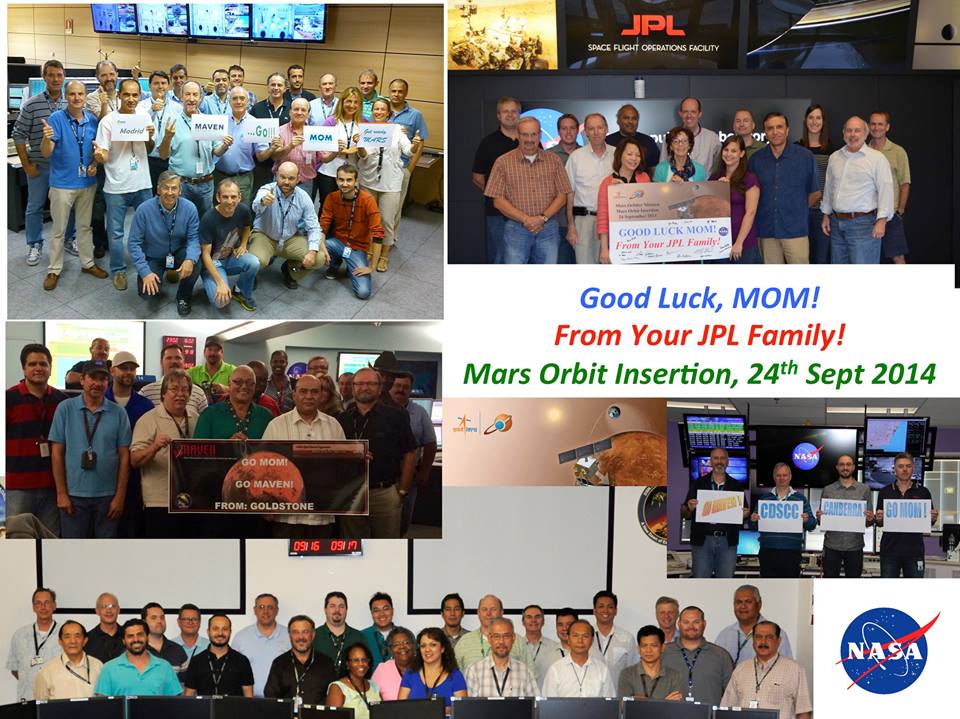 India’s MOM spacecraft is arriving at Mars just days after NASA’s Mars Atmosphere and Volatile EvolutioN spacecraft (MAVEN), which entered orbit around the Red Planet on Sunday Sept. 21, 2014. Like MOM, the MAVEN probe will study the Martian atmosphere, but its goal is to understand the behavior of atmospheric elements in the upper reaches in response to solar activity.

“As the first orbiter dedicated to studying Mars’ upper atmosphere, MAVEN will greatly improve our understanding of the history of the Martian atmosphere, how the climate has changed over time, and how that has influenced the evolution of the surface and the potential habitability of the planet,” said NASA Administrator Charles Bolden. “It also will better inform a future mission to send humans to the Red Planet in the 2030s.”

“We congratulate the Indian Space Research Organization for its successful arrival at Mars with the Mars Orbiter Mission.

“It was an impressive engineering feat, and we welcome India to the family of nations studying another facet of the Red Planet. We look forward to MOM adding to the knowledge the international community is gathering with the other spacecraft at Mars.

“All space exploration expands the frontiers of scientific knowledge and improves life for everyone on Earth. We commend this significant milestone for India.”

For more about the MAVEN mission, refer to https://www.nasa.gov/maven