International Observe the Moon Night (InOMN) is an annual event that is dedicated to encouraging people to ‘look up’ and take notice of our nearest neighbor, the Moon. From looking at the Moon with a naked eye to using the most sensitive telescope, every year on the same day, people from around the world hold events and activities that celebrate our Moon. You can find information about an InOMN event near you, or register your own event, on the InOMN website. We encourage everyone to join us in the celebration! 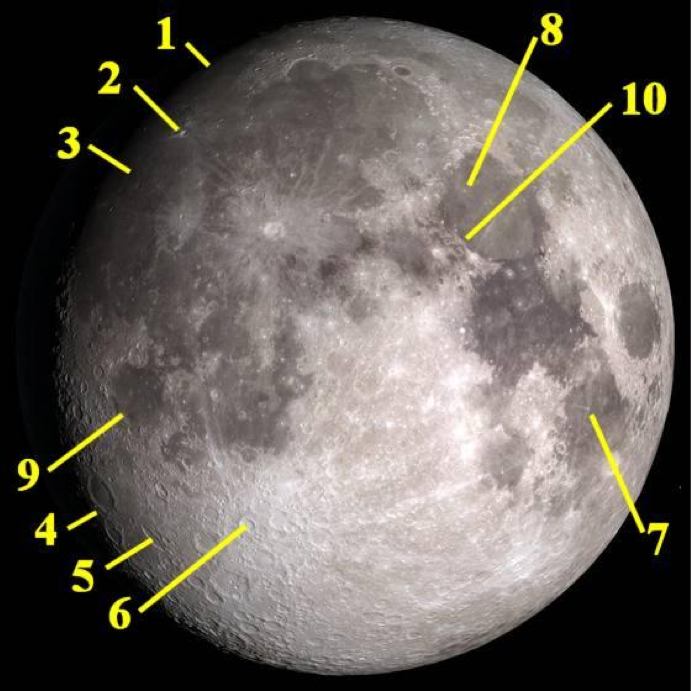 The above map depicts the Moon as it will appear at approximately 10:30 PM EDT and 7:30 PM PDT on International Observe the Moon Night, September 6, 2014. With the terminator (the line between the day and night side of the Moon) near the western edge of the Moon, we will be able to see detail in the topographic relief of a number of fascinating features in this area. However, most of the Moon’s visible surface will experience the flatter lighting associated with the approaching full Moon phase. While this flat lighting makes viewing topographic relief much more difficult, it enhances our ability to see features that are distinguished by their albedo, or amount
of reflectance.

Aristarchus Plateau–An exceptional region of impact craters (Aristarchus, Herodotus) and volcanic features such as Schroter’s Valley, the greatest of the Moon’s sinuous rilles, formed by a river of lava. (2)

Marius Hills–A cluster of many small volcanic domes and cones. (3)

Wargentin–After it formed from an impact, lava erupted from cracks on the floor of this 84 km-wide crater, filling it to its rim. It now resembles a plateau more than a crater. (4)

Schiller–Most lunar craters are round but Schiller is exception. Highly elongated at 179×71 km, it may have been formed by an asteroid impacting at a very low angle. Some have even suggested that it marks where a former moon of the Moon spiraled into the lunar surface. (5)

The Rays of Tycho–65 million years ago, an asteroid slammed into the Moon, forming the crater Tycho and sending sprays of light-colored pulverized rock across wide areas of the Moon’s surface. How far can you trace these bright rays? (6)

The Rays of Messier–A very low-angle impact formed the crater Messier, sending a spray of light, pulverized rock preferentially away from the direction from which the impacting asteroid came. (7)

Linne–This small (2.4 km wide) crater is normally quite inconspicuous. But near full Moon, it is seen to be surrounded by a bright patch that has caught observers’ attention for many years. (8)

Mare Pyroclastic Deposits–Near full Moon, the darker basaltic lava rock of the lunar mare or seas stands out particularly well from the lighter rock of the lunar highlands. This is seen well through binoculars or even with the unaided eye. Through a telescope, a number of mare show even darker patches of pyroclastic deposits. These widespread deposits of ash came from later eruptions of volcanic fire fountains. See southern Mare Humorum (9), and southwest Mare Serenitatus (10).