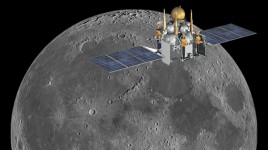 After many years of hiatus, scientists at the Space Research Institute of the Russian Academy of Sciences will resume Russia’s Moon-exploration program with the launch of the Luna-Glob probe in 2014. They have chosen six locations for landing automatic stations, similar to the Lunakhod rovers landed several decades ago.

The Luna-Glob probe was designed for studying the Moon’s Polar Regions after NASA’s Lunar Reconnaissance Orbiter discovered the presence of water ice in polar craters that are constantly in the sun’s shadow. This was a significant discovery because the polar environment is so different from the territories studied by the Russian and American “Luna” and “Apollo” programs.

The pores of the moon’s soil (called lunar regolith) are filled with water. This is similar to the earth’s permafrost and can be described as “lunar permafrost”. The Luna-Glob probe will study its properties using special equipment, which will assess the content of water in the soil. It has a mechanical hand to collect the samples of soil at depths up to two meters. These samples will be analyzed in detail by equipment onboard the probe. The results will help reveal from where water appeared on the Moon and also on the Earth because our planet was originally dry and hot, says the institute’s Igor Mitrofanov.

“Possibly, comets brought water onto the Moon and also the Earth. There are two significant differences between the Earth and Moon. The Earth has a stronger gravitational field and a thick atmosphere. Owing to this the Earth could hold out, water and rivers, lakes and oceans appeared, and later, all this led to the origin of life. The Moon has no atmosphere and has a weak gravitational field. Water on its surface can be only under the conditions of extreme cold,” Igor said.

Water is necessary not only for research purposes. It is an important resource for the exploration of the Moon, which will be most likely started from the poles.

“When question arises about manned expeditions and setting up of lunar stations, water resources should guarantee the station with oxygen and water for day to day use and can be used to produce hydrogen, an excellent fuel for rockets. At present, we are engaged in hydrology surveillance for the exploration of the Moon in the future,” Igor Mitrofanov said.

Luna-Glob will be the first sign of Russia’s return to a comprehensive program to study the Moon. The mission will deploy 4 high speed penetrators, leftover from the cancelled japanese Lunar-A project, as well as a polar probe. The probe will be equipped with a radio beacon, which will help other probes to land on planned areas with great accuracy. Several other missions, including the Luna-Resurs will start creating a robotized base on the Moon. This, on its part, will prepare everything necessary for landing a manned mission.