Author Matthew Siegler (Planetary Science Institute, Tucson, Arizona), noticed an odd asymmetry in the lunar polar hydrogen maps produced by Richard Miller (Univ. of Alabama, Huntsville) and David Lawrence (John Hopkins Applied Physics Laboratory, Laurel, Maryland). Siegler, Miller, Lawrence, who are members of SSERVI’s ‘Volatiles, Regolith and Thermal Investigations Consortium for Exploration and Science’ (VORTICES) team, and co-authors discovered that ice at each pole was offset by the same distance, but in exactly opposite directions. The precise opposition and offset of the polar ice indicated the moon’s axis had shifted. 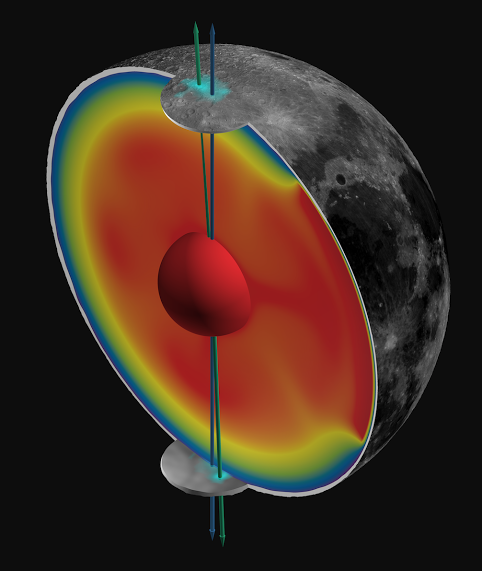 This 3D cross section of the moon shows the Procellarum region of the crust, that was likely responsible for the change in mass that caused the moon’s axis to tilt. Credit: James Keane (U. Arizona)

When lunar ice is exposed to direct sunlight it evaporates into space, making it a very sensitive marker of the moon’s past orientation. Over eons, the tilting Moon allowed sunlight to slowly creep into once shadowed areas, effectively “painting” a path of stable ice along which the axis moved. The researchers matched this path with thermal models showing where the ice should be and inferred the moon’s axis had tilted roughly 6 degrees.

This is the first physical evidence that the Moon underwent such a dramatic change in orientation and implies that much, or all, of ice on the Moon is billions of years old.

“The new findings help explain the earliest dynamical and thermal history of the Moon and may shed light on the origin of lunar water,” said SSERVI Director Yvonne Pendleton.

With a very large change in mass distribution, a planet can shift on its axis– a phenomenon scientist refer to as ‘true polar wander.’ On Earth, ‘polar wander’ is believed to be a direct result from movement of the continental plates. The moon’s change in mass was internal, resulting from ancient volcanic activity 3.5 billion years ago that melted a portion of the moon’s mantle, causing it to bubble up toward its surface.

Co-author James Keane (Univ. Arizona), who had been studying the lunar gravity field as part of NASA’s GRAIL mission, modeled how changes in the lunar crust may have affected the moon’s spin and tilt. He found that a low mass region on the lunar near-side could match the direction and amount of polar wander inferred from the ice. 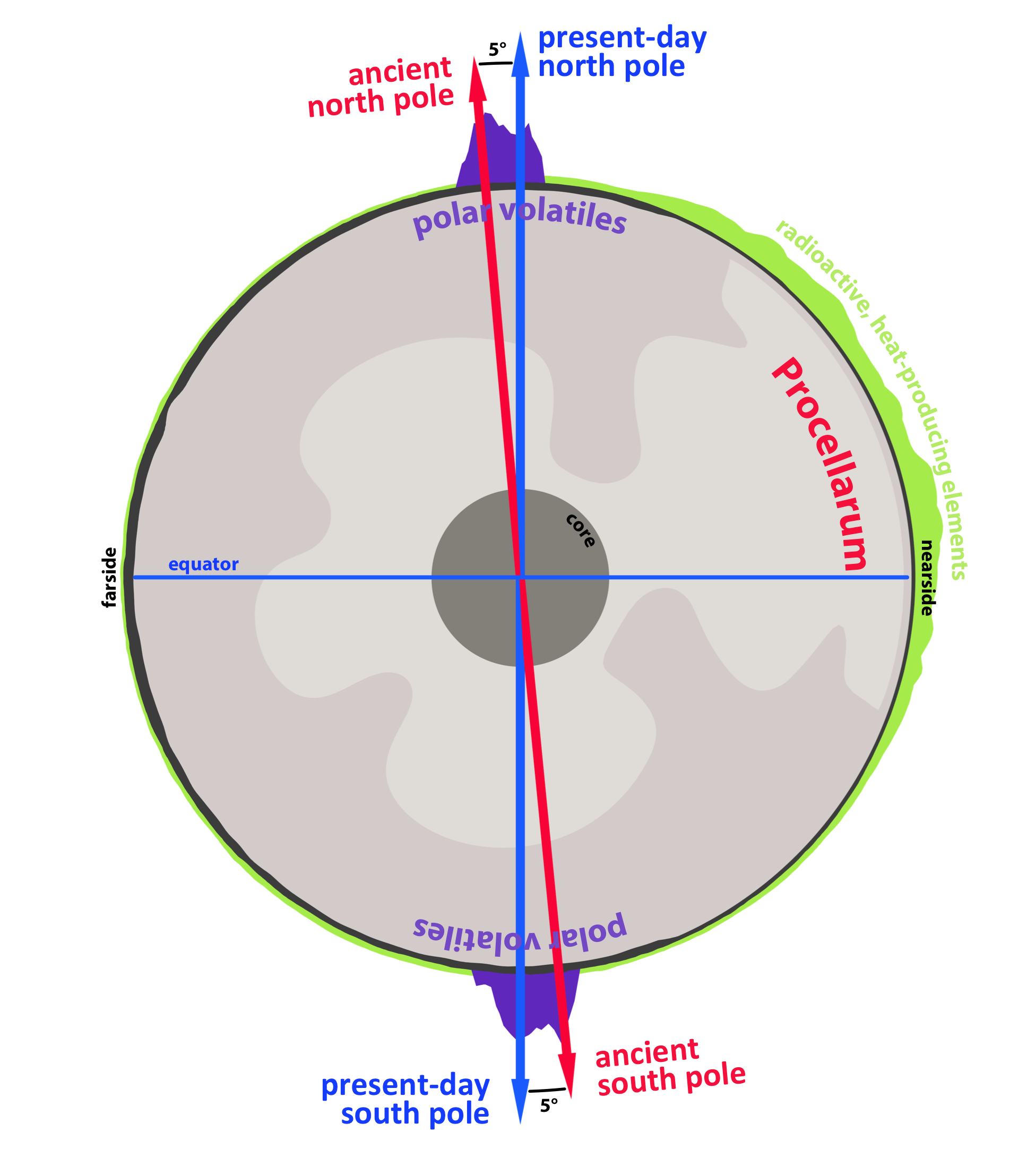 This 2D illustration shows a cross-section of the moon with additional mass on the nearside above the Procellarum region. Credit: James Keane (U. Arizona)

The team shows that concentration of radioactive material on the moon’s near-side likely heated the mantle from above, and caused a density change in the mantle below the crust, reorienting the Moon. Some of that melt material came to the surface to form the dark patches on the moon that we see at night. But below the lunar surface the mantle is still warmer today than other areas, which affects the current orientation of the Moon and the face we see from Earth.

“This was such a surprising discovery. The same face of the Moon has not always pointed towards the Earth, but in this case, as the axis moved the “Man on the Moon” changed. He sort of turned his nose up at the Earth,” said Siegler. 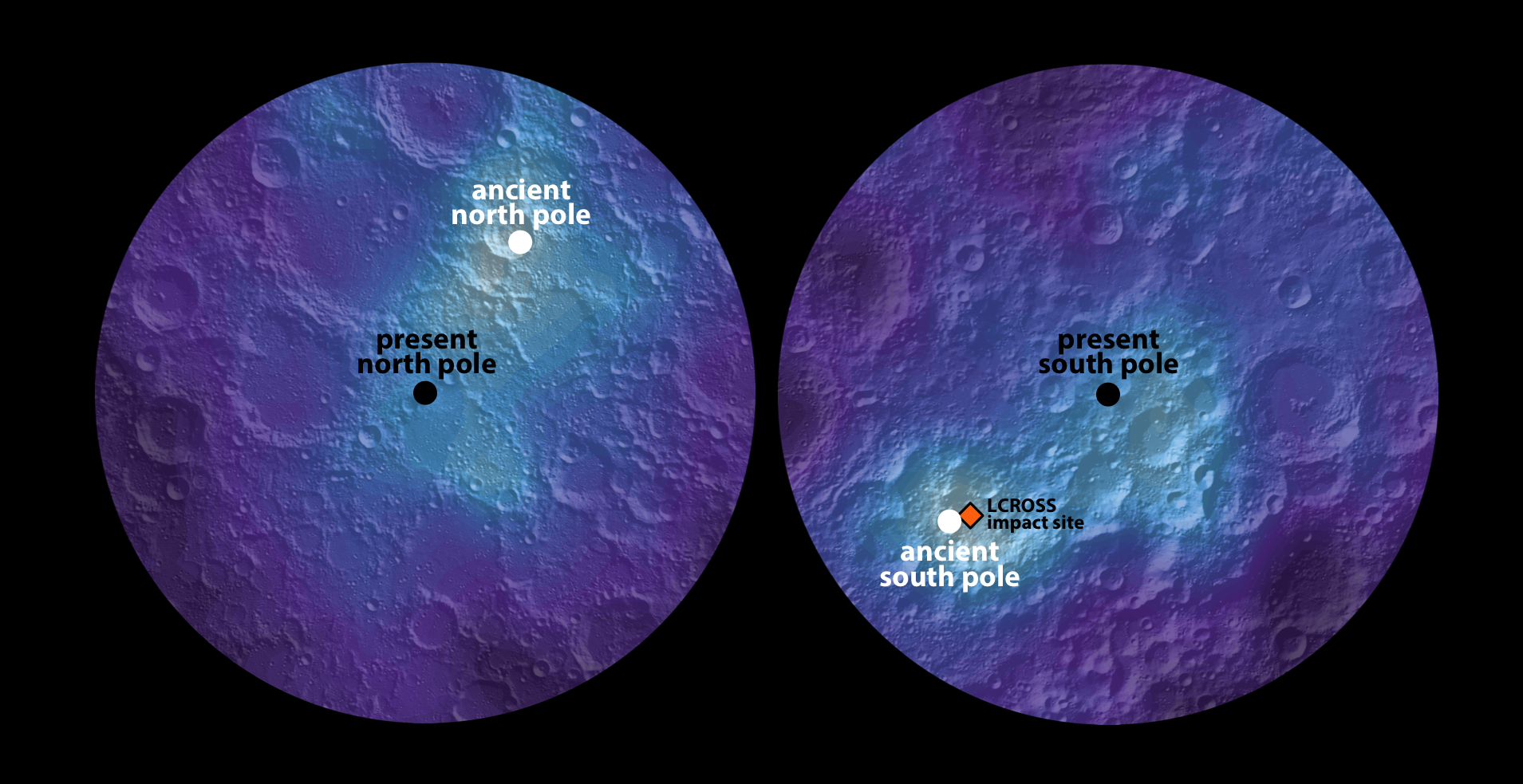 This polar hydrogen map of the moon’s northern and southern hemispheres identifies the location of the moon’s ancient and present day poles. Credit: James Keane (U. Arizona)

Most of the early lunar ice likely evaporated when the moon tilted, suggesting that the moon may have once had much more ice near its poles than we see today. The team’s findings may open the door to further discoveries on the interior evolution of the Moon and the mystery of where the water on the moon and Earth came from.

“Much of the lunar ice seems to predate the polar wander, making the ice very ancient,” Siegler explains. “The hydrogen appears to have come from the outer solar system well after the Earth and moon formed. Studying–or even sampling–the ancient ice on the moon, or other bodies like Mercury, might give us a clue to its origin.”

Based and managed at NASA’s Ames Research Center at Moffett Field, Calif., SSERVI’s lunar and planetary science research is advancing human exploration of the solar system through scientific discovery.

You can also download an associated video showing how the Moon’s axis shifted over time.