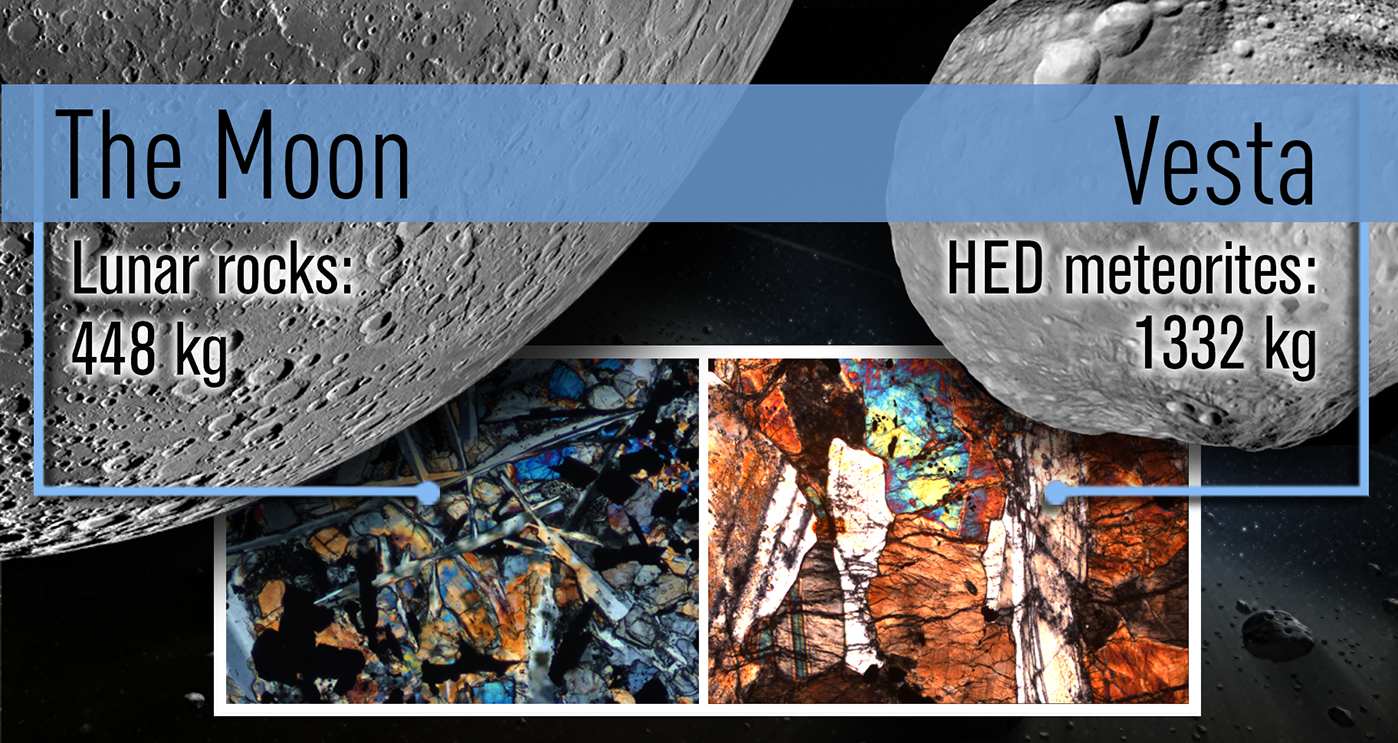 Scientists have now discovered that studying meteorites from the giant asteroid Vesta helps scientists understand the event known as the “Lunar Cataclysm,” when a repositioning of the gas giant planets destabilized a portion of the asteroid belt and triggered a solar-system-wide bombardment. Previously, researchers had only lunar samples to work with. Scientists are now using a class of meteorites known as howardite, eucrite and diogenite meteorites, that are connected to Vesta to study the lunar cataclysm, providing about three times more samples to analyze.

The left-hand mosaic of the far side of the moon is based on data from NASA’s Lunar Reconnaissance Orbiter. On the right is an image of the giant asteroid Vesta from data obtained by NASA’s Dawn spacecraft. The insets show thin sections of the lunar sample 10069-13 and eucrite NWA1978. Image credit: NASA/GSFC/ASU/JPL-Caltech/UCLA/MPS/DLR/IDA

The asteroid Vesta, and perhaps other large asteroids, have more in common with Earth’s moon than previously thought, according to a team of researchers from the NASA Lunar Science Institute (NLSI). Both Vesta and the moon appear to have been bombarded by the same population of high-speed projectiles four billion years ago.

Despite the fact that the moon is located far from the asteroid Vesta, in the main asteroid belt between the orbits of Mars and Jupiter, they seem to share some of the same bombardment history. The radiometric ages of moon rocks brought back by Apollo astronauts have long been used to study the bombardment history of the moon.

Similarly, the ages derived from meteorites samples have been used to study the collisional history of main belt asteroids. In particular, howardite and eucrite meteorites (common species in our meteorite collections) have been used to study asteroid Vesta, their parent body. Now, for the first time, an international team of researchers has linked these two datasets, and found that the population of projectiles responsible for making craters and basins on the moon were also hitting Vesta at very high velocities, enough to leave behind a number of telltale impact-related ages.

This research has been possible thanks to a multi-disciplinary work, including geochemistry, dynamics, simulations of impact events, and spacecraft observations. The findings were published in the March issue of Nature Geoscience in an article titled: “High Velocity Collisions from the Lunar Cataclysm Recorded in Asteroidal Meteorites.”

With the aid of computer simulations, researchers determined that meteorites from Vesta recorded impacts by unusually high-speed projectiles which are now long gone. They deduced that this period of bombardment was related to a time in solar system history four billion years ago when gas giant planets, like Jupiter and Saturn, migrated from their original orbits to their current location.

The team’s findings support the theory that this repositioning of the gas giant planets destabilized portions of the asteroid belt and triggered a solar system-wide bombardment of asteroids. This event, called the “Lunar Cataclysm,” pulled many asteroids into orbits that collided with Earth and the moon. The research provides new constraints on the start and duration of the lunar cataclysm, and demonstrates that the cataclysm was an event that affected not only the inner solar system planets, but the asteroid belt as well.

The team’s interpretation of the howardites and eucrites was augmented by recent close-in observations of Vesta’s surface by NASA’s Dawn spacecraft. In addition, the team used the latest dynamical models of early main belt evolution to discover the likely source of these high velocity impactors. The team determined that the same population of projectiles hitting Vesta also had orbits that struck the moon at high speeds.

“It appears that the asteroidal meteorites show signs of the asteroid belt losing a lot of mass four billion years ago, with the escaped mass beating up on both the surviving main belt asteroids and the moon at high speeds” says lead author Simone Marchi, who has a joint appointment between two of NASA’s Lunar Science Institutes, one at the Southwest Research Institute (SwRI) in Boulder, Colorado, and another at the Lunar and Planetary Institute in Houston, Texas. “Our research not only supports the current theory, but it takes it to the next level of understanding.”

This research unveils an unexpected link between Vesta and the moon providing new means for studying the early bombardment history of the terrestrial planets.

The Dawn mission to Vesta and Ceres is managed by NASA’s Jet Propulsion Laboratory for NASA’s Science Mission Directorate, Washington. Dawn is a project of the directorate’s Discovery Program, managed by NASA’s Marshall Space Flight Center in Huntsville, Ala.